At first glance, Sonar X2 doesn't look all that different from X1. Dig deeper, though, and you'll find there are so many tweaks they add up to a major update. Many of these relate to getting things done quicker, so that's where we'll start.

Quick Groups, which allow a group of identical controls to be adjusted as one, have been enhanced considerably in X2. Just remember the paramount Quick Groups rules:

One of my favourite Quick Group applications involves mixing, where it's good practice to keep the master fader at zero, and the output peak level around -6dB. However, sometimes you'll boost a channel that needs a little more level, then another, and then another; and slowly the faders start creeping up to where you need to turn down the master fader. A variation on this problem is when the faders are up far enough that you run out of room to move them up any further, because in that case, even turning down the Master channel's Gain knob (which can reduce the overall level coming into the Master fader so you can keep it at zero) won't solve the problem. 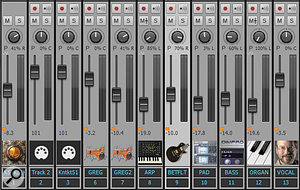 The little orange squares indicate faders that belong to a Quick Group. Note that the MIDI tracks are not affected, as Quick Grouping affects only like tracks (audio, MIDI, or bus).

If you haven't added fader automation before this problem crops up, Quick Group is a great solution. Keep the master fader at zero, hold down Ctrl, and click-drag down any fader in Track or Console view that's not selected. All faders will be reduced ratiometrically by the same amount, so reduce them until the master's audio peaks are back at -6dB. If you have some tracks with automation, note how much you reduced the track you're dragging. If, for example, the fader was originally at -10dB and you dragged it down to -14dB, you've reduced the gain by 4dB. You'll need to know this to change levels on tracks with fader automation. This is because if you manually bring an automation-controlled fader down, on playback it will bounce back to whatever the automation tells it to do. Fortunately, there are two workarounds. One is to Quick Group the channel Gain controls (which cannot be automated anyway), and lower them. However, these operate pre-insert, so if there are effects in the various tracks that are affected by input level, such as distortion or compression, move along to the next option. 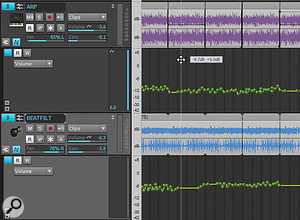 Selecting the automation, then positioning the Smart or Move tool along the upper or lower edge, allows changing the level of all automation nodes simultaneously.

In Track view, open up the automation lanes that contain fader automation data, then Ctrl-click to the left of each lane's Read button to select all automation nodes in all level automation lanes. Next, position the Smart tool or the Move tool toward the upper or lower edge of any of the selected automation lanes. Click and drag down — referring to the tooltip-type label's decibel reading near the cursor — by an amount equal to the reduction you applied to the other non-automated faders. You may not be able to reproduce this amount exactly, but it will be close. Now all your tracks have been reduced in level by the same amount.

Another useful mixing-related Quick Group function is to change all track outputs to the Master bus. Sometimes when recording I'll forget to change the track output from their default settings (interface outputs 1+2, for example) to the Master. Then I turn down the Master, and find that some tracks don't respond. Quick Groups provide a quick fix. 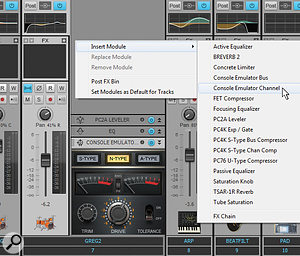 The only Quick Group limitation with effects chains is that it works only with the Controls page. If you select the Effects page and remove an effect, it will not remove the effect in the other effects chain. What's more, once you've removed an effect from one module, the other will cease to be identical, so Quick Grouping no longer applies to controlling them — even with 'neutral' controls, like the input and output levels.

Quick Grouping can affect sends and their parameters. Suppose you have four tracks of vocal harmonies, and you want to insert sends so they can feed a reverb bus. Select the four tracks, insert a send in one of them while holding down Ctrl, assign it to the reverb, set the gain and pre/post switch, and you're done (unless you want to individualise settings for some sends, like panning). Furthermore, as you work with the mix, if you use Quick Groups, then tweaking one send level changes them all.

You can also reset all meter clip indicators at once with Quick Grouping, as well as edit meter ranges. It can be useful to have the meters set for maximum range when recording (to make sure you can see any low-level crud), and a smaller range while mixing to get a good sense of what the peaks are doing. Adjusting these on a channel-by-channel basis is a lot of trouble, but with Quick Grouping, it's a two-click process to change all meters to the desired scale.

Finally (at least for now — I could go on forever with Quick Groups), I often like adding a sharp low-cut filter to tracks that don't have bass content. This can remove subsonic rumbles, handling noise, vibrations that work their way up mic stands into mics, and so on. It's easy to do: select the tracks, open a ProChannel in one of the selected tracks, and in the EQ, while holding Ctrl, enable the HP stage. Set it for 48dB/octave at a frequency of around 30Hz.

Tired of sizing and resizing track heights in Track view? Auto-Zoom is arguably the single best workflow enhancer when you're editing; I pretty much leave it on all the time. In Track view, go to the View Tab and select Auto-Zoom. It has two main modes.

If you drag the horizontal splitter bar between tracks for an unselected track, whatever size you specify for that track will be assumed by all tracks. This is handy if you want to display the same widgets for all tracks.

But for me, that's usually just a shortcut to the second mode, as I start by changing all tracks to their minimum height. If you then select one track and adjust its height, the other tracks will remain at the height you left them. But as soon as you select another track, it will assume the height you specified for the previously selected track, which will then assume the height of the other, non-selected tracks. This gives you a nice, big track view for the selected track, and the ability to see all the widgets you want. After you're done with your edits, select another track, and it now gets the 'big screen' treatment. Cool.

The top half of the Track view time ruler has some useful new properties. Hover the cursor over it, and the cursor turns into a magnifying glass. Hold down the left mouse button and drag down to zoom in, or up to zoom out horizontally. Do the same thing while holding down the right mouse button for vertical zooming. There's also a useful shortcut: double-click in the top half of the time ruler, and the entire project zooms in or out horizontally to fit within the track view. 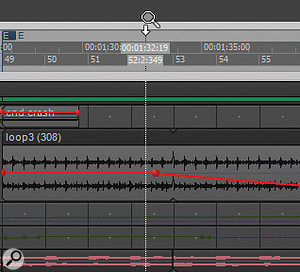 Hovering the cursor over the top half of the timeline, then clicking and dragging, can provide horizontal or vertical zoom in or zoom out.