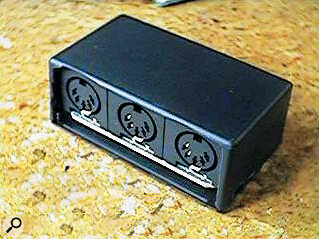 With Hinton Instruments' AudioCalc, your Atari can earn its keep helping out with essential computations in the studio. Derek Johnson finds it all adds up...

Continuing the theme of the last couple of Atari Notes columns, where I looked at previously commercial software which has recently become free to Atari owners, this month I'm looking at a suite that won't help you to make music as such, but may be useful during your musical endeavours. Hinton Instruments' AudioCalc Professional Audio Calculator v1.06 (last mentioned by Martin Russ in SOS Atari Notes December '93) used to retail for around £40. It was a bargain then, for its comprehensive set of music‑ and audio‑specific calculators, and now, if you have a need for its tools, it's an unmissable free download from Hinton's web site (www.hinton.demon.co.uk). If you visit, though, be prepared for a tirade against those Atari users who seem unable to understand the concept of paying for software! The sobering subtext is that it wasn't just a badly managed platform that led to the lack of support for Atari software: piracy took a lot of the profit, and hence motivation, out of the development of new software.

We Can Work It Out

When you download AudioCalc, it will run as a desk accessory on any flavour of Atari ST, TT or Falcon, and will thus be instantly available while you are running your usual music software. It can also be used as a stand‑alone application: simply change its file extension from ACC to PRG, using the Show Info option under the File menu on the Atari desktop.

However you run it, AudioCalc is organised as five spreadsheet‑style calculators, selected from one small main window:

Using the calculators, only one of which can be open at a time, is simple: input the necessary values, press the 'calculate' button, and the software goes to work. The supplied docs are useful, and each calculator has its own 'help' window, which explains briefly and clearly what's going on.

All in all, AudioCalc is a valuable collection of tools. Personally, I'll use the Music calculator most often — timed delays can be tons of fun, but working their values out usually isn't! As with much previously commercial software that is now freely available, AudioCalc comes with no support, but, as the docs say, it doesn't need any!

Mario Becroft, that intrepid New Zealand‑based designer of Atari add‑ons, has done it again. His new MIDI‑3 is a three‑way MIDI output expander which attaches to the modem port of an Atari ST. When used in conjunction with MIDI sequencing software such as Notator and Cubase, MIDI‑3 provides three extra independently addressable MIDI outputs in addition to the Atari ST's main MIDI Out.

MIDI‑3 is fully compatible with the (discontinued) original C‑Lab Export expander, in that it works with any software that supports Export. The unit requires no extra power or connections, bar plugging into the modem port. It's available in two versions: cased, or uncased for incorporation into recased STs or Falcons. The latter option is marginally cheaper, at NZ$100, as opposed to $110 for the uncased version. UK pricing is currently being negotiated, but is expected to be the right side of £40 for either unit.

Abingdon Synthesis Projects will be handling UK distribution. Contact them for further info at the address below, and watch this column for a proper assessment as soon as I get my hands on a MIDI‑3.