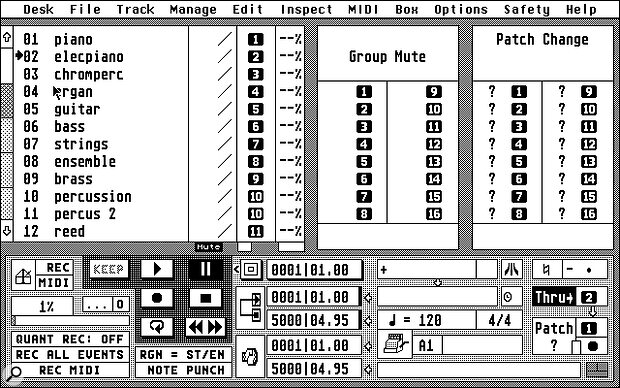 Tired of using Notator or Cubase? Why not try out the alternative interface of Hybrid Arts' Edit Track sequencer instead?

Lately it seems that this column is becoming a dedicated Retrozone for ST software! This is due to a number of things, including the limited amount of brand‑new software being developed for our platform, and the successful efforts of Tim Conrardy in persuading the writers of many classic programs to sanction the free distribution of the final versions of their software. Tim's web site is the place to visit to download the results (sites.netscape.net/timconrardy/index.htm). 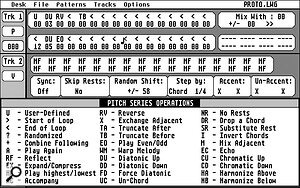 The main screen of Ludwig.

This month, our regular trawl though the ST's past takes us to Hybrid Arts. The company started coding with pre‑ST Atari eight‑bit computers, but made their name with a suite of well‑designed and stable musical tools for the ST. Sequencing, score layout, synth editing and algorithmic composition were all represented in HA's range. Their most ambitious product — the 1989‑vintage ADAP digital audio workstation for Atari — was somewhat ahead of its time. For sequencing, the company produced a family that included Edit Track and SMPTE Track; v7.1 of the former is now available for download. In addition, a pair of 'beta' versions are available which upgrade copies of SMPTE Track for those with the matching hardware SMPTE sync box. Most of the note‑manipulation power that you get with Cubase or Notator SL is available with Edit Track in some way, though many users prefer HA's interface. It does have one or two tricks that its higher‑profile competition doesn't, moreover. For example, Edit Track is always in record, so even if you're just noodling, you can press an on‑screen button at any time and print the results to a track. Also, an on‑screen virtual joystick lets you manipulate a range of MIDI controller data with your mouse.

Hybrid's GenEdit, not surprisingly, is a generic MIDI synth sound editor. A good range of profiles came with the software, though the list now has a very mid‑'80s feel; instruments supported include Yamaha's DX7, Roland's D110 and D50, the Ensoniq ESQ1, the Kawai K1, and the Oberheim Matrix 6, and it's also theoretically possible to create new profiles for unsupported instruments. Synth‑specific editors were also available in the Hybrid Arts range, and currently CZ‑Android is freely available — obviously designed for Casio's CZ‑zeries of digital synths, it provides comprehensive editor/librarian functions and even random patch creation.

EZ‑Score Plus probably won't compete with the output of Steinberg's Cubase VST Score running on a Mac, but then Hybrid Arts' old software will run on pretty much any version of Atari. Integration with other HA software is provided — scores can be generated from EZ‑Track, EZ‑Track Plus, SyncTrack, and SMPTETrack files — or scores can be created from scratch within the program using mouse, ST keyboard or MIDI. Just three staves can be worked on, in three score formats, but over 140 symbols are available to use in a score. A wide range of time signatures can be input, tuplets are accommodated, and lyrics are handled well. Your work can be auditioned over MIDI, or (for the perverse) via the ST's internal sound chip. Finished work can be output to 9‑ and 24‑pin Epson‑compatible dot‑matrix printers in one of three 'modes' that balance quality and speed. Sections can also be output as graphics files for importing into DTP software.

This column never gets tired of algorithmic composition tools. Suffice to say that HA's Ludwig, a contemporary of Intelligent Music's M, was the cause of much head‑scratching amongst the Atari community of the late '80s. Ludwig (legend has it the software was named after HA's R&D director's dog!) is an eight‑track composition tool, each track of which can be 16‑voice polyphonic. Music data on the tracks is divided into three components (pitch, duration and velocity) which are used by the program's algorithms to generate new material. It becomes rather more complicated from this point, but the basic rule is that the algorithms used to generate new material aren't fixed in quite the same way as in other programs — the user can choose the algorithm that will work on a given pattern and section ('Cell') of music. I have a feeling we'll be visiting Ludwig and the other Hybrid Arts software in the future...

It's been missing for a while, but the good news is that Hallvard Tengeraas' Notator/Creator mailing list is back on line. Hallvard hopes the list, which has over 130 members and has been around for nearly three years, will stay where it is for a while! The lists's homepage not only contains the details of how to join the list, but also FAQs and links to downloads and sites of relevance to Atari‑based musicians in general, as well as to Notator and Creator users.

Two Atari shows took place during June, one in Neuss, Germany, and the other in Gothenburg, Sweden. Both went well, by all reports, and if you would like to browse pictures they are available on the Internet. Point your browser at www.sak.nu/nas/nas2k/index.html to catch up with events at the Svenska Atariklubben's Nordic Atari Show 2000; if that's not enough for you, more pictures are available at w1.455.telia.com/~u45510004/nas2k. Photos from the World of Alternative Atari and Amiga fair are also on line, at www.hotel‑kurfuerstendamm.de/woller/catalog.html.

Milan Computing apparently showed off their forthcoming Milan II TOS‑compatible computer at the event; in fact, German TV station WDR featured the company during June in a segment of their Computer Club program. Milan can be reached at www.milan‑computer.de.