Secrets Of The Mix Engineers: Neal Pogue By Paul Tingen 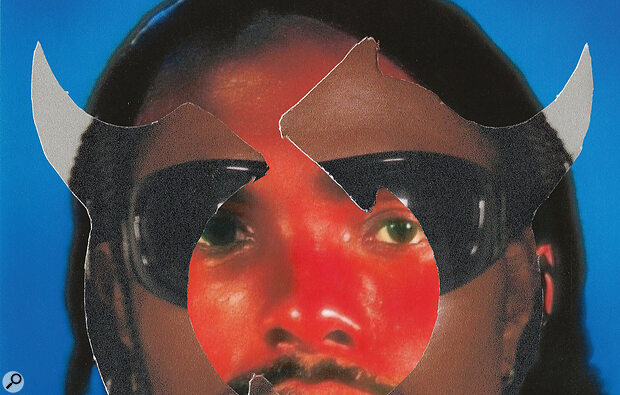 Want a hit that transcends genres? Hire a mix engineer who does the same — as Steve Lacy did with Neal Pogue.

Steve Lacy’s song ‘Bad Habit’ has the honour of being the first to top five different Billboard genre charts at the same time — the Hot R&B/Hip‑Hop Songs, Hot R&B Songs, Hot Rock & Aternative Songs, Hot Rock Songs and Hot Alternative Songs charts — as well as all five American streaming, airplay and sales‑based rankings. It reached number one in the main US Hot 100 singles chart after spending a month at number two and, at the time of going to press, could be found in the UK top 10.

This genre‑crossing hit is a strange mashup of rock, R&B, indie pop and hip‑hop, with some unusual ingredients including messy‑sounding drums, a heavy bass, a repetitive guitar part that has been described as “evoking a car engine struggling to turn over”, haphazard‑sounding vocals mixed relatively far to the back, and a chaotic breakdown at the end. It lacks the typical trappings of modern hit songs: no 808s, no hard‑hitting drums, no ultra‑tight, quantised synth and sample‑dominated arrangements, no Auto‑Tune, no in‑your‑face hooks. What the song does have is attitude, which is most likely the reason for its initial popularity on TikTok and subsequent commercial success.

Steve Lacy has form when it comes to releasing low‑budget, DIY material. His first EP, Steve Lacy’s Demo (2017) was made entirely on an iPhone, using GarageBand to edit. The singer, guitarist and producer also did everything himself, including mixing, on his first solo album, Apollo XXI (2019). But while he handled most of the songwriting and production on his second album and major‑label debut Gemini Rights (2022), he had more outside help this time, including several co‑writers and producers, musicians, and an engineer and a big‑name mixer.

Gemini Rights, which contains ‘Bad Habit’, was mixed by Neal Pogue, who, despite his five Grammy Award wins and a hugely impressive list of credits, is not part of the go‑to elite for pop mixes dominated by Serban Ghenea, Manny Marroquin and a handful of others. “It’s hard to get to number one, especially for me, a guy who does not do very pop‑driven stuff,” he says. “I kind of mix the cool kids, and the cool kids don’t go to number one all the time. I do the non‑trendy stuff. I am who I am. I don’t pretend to be something that I am not. I don’t chase things. I’m just blessed to get calls to mix stuff that I like. I’m at a point in my career now where I can pick and choose what I want to work on, and what I don’t. I come from a musician and producer standpoint. I’m a mixer‑producer. I’m heavily into melody, I’m heavily into grooves, and if I don’t like it, it’s hard for me to work on it.

“I like to work with genuine, unpretentious artists, like Steve Lacy. A song like ‘Bad Habit’ is just a genuine song that comes from a pure, innocent place. For example, his vocals are not Auto‑Tuned. It’s a different type of pop that feels more like punk or new wave, and does not have a place in anything. It creates its own place. That’s why it’s been number one in so many different charts. You can’t put it in a box.” 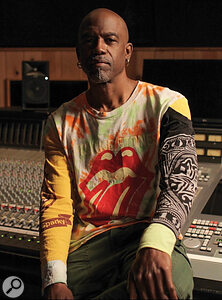 Neal Pogue.Originally from New Jersey, Neal Pogue started out as a drummer, and moved to California, where he studied at the Sound Master Recording school. After that he was given a break by Michael Jackson’s brother Randy. Pogue interned at Larrabee Sound Studios and went on to establish himself as one of the US’s top engineers, mixers and producers, with credits like Outkast, André 3000, Pink, Nicki Minaj, Lil Wayne, Macy Gray, Haim, Doja Cat and Tyler, the Creator. While he predominantly works as a mixer, Pogue has also worked an arranger, composer and/or producer with Earth, Wind & Fire, Nelly Furtado, Busty and the Bass, and many others.

Pogue has moved back and forth between Atlanta and Los Angeles during his career, and his current studio is in LA. It is called The HotPurplePettingZoo, because, he says, it has “purple fur on the walls and when people come in they start petting the walls. And with all the equipment in here it gets kind of warm.”

It’s not only the name and the purple fur that are unusual. Some of his gear choices are unconventional, particularly his JBL monitors, and a notable feature is the rack of well‑worn vinyl. “I have to have these records near me,” says the mixer‑producer. “Most of the vinyl in this room is from my childhood home. It inspires me, because as a kid, I used to spend hours in my room listening to these records. The sound and feeling of those old ’70s and ’80s records is what inspires me to mix. If you compare vinyl to CD or streaming, they have a totally different sound. Years ago, I compared a Talking Heads vinyl record to the same CD, and I was blown away by how much the vinyl sounded superior. Of course, we like the clean CD sound, but the low end of the vinyl was amazing. I was in my early ’20s, and it was a wake‑up call.”

Thirty years later, Pogue’s outlook on mixing is still heavily influenced by his experiences with vinyl records. “There are songs that I heard in the 1970s, or the ’80s, where I’m like, ‘Wow, I’ve never...