Ricardo Bacelar is a renowned jazz pianist, composer and record producer, whose music is loved in North America and Japan as well as his home country of Brazil. He is also a diplomat (Honorary Consul of Belgium), President of the OAB National Culture and Art Commission, and a copyright lawyer. He manages this multi‑threaded working life, he says, through his close relationship with his family, and the practice of yoga.

As if this wasn’t enough, last year he finished building a house for himself and his family in Fortaleza, on the coast of north‑eastern Brazil, and equipped it with a state‑of‑the‑art Dolby Atmos recording studio, which he has named Jasmin Studio after his Jasmin Music label. Bacelar spent three months experimenting in the studio before embarking on his new album Paracosmo, which he produced last year alongside Brazilian guitarist Cainã Cavalcante, and on which he played every instrument. Since then, he has worked on several other projects, including another album, Congênito, which will feature 12 songs where once again Ricardo will sing and play every instrument.

“I ‘think’ in music,” he says, “Good music is what drives me, and I wanted to have a space at home to produce and record, to have more comfort to work with my compositions and develop my own catalogue. The studio is a place for creativity where my ideas can flow, and I can develop them at will. Five years ago, when we started thinking about this studio, Dolby Atmos was still very much focused on movie theatres, but I already had the feeling that it had to serve the music field, too. Designing a room, specifying the equipment and ensuring the microphones are set up to capture sound in an immersive way offers us a great advantage in the initial mix and in post‑production.”

Bacelar worked with architectural acoustic company Walters‑Storyk Design Group (WSDG) on the build, and with Daniel Reis from Sennheiser on the configuration of a 7.1.4 array of Neumann KH420, 120, 310 and 810 loudspeakers. It was Reis, notes Bacelar, who had the idea to create a hybrid studio where it would be possible to move seamlessly between the analogue and digital worlds, using Burl converters and Dante networking technology. A key priority was the ability to use an analogue console, analogue outboard units and plug‑ins at the same time. SSL’s Duality Delta console made this possible: it’s an automated analogue mixing desk that also has comprehensive DAW control features.

“Of course, the SSL is of a very high standard overall, but it also has a great personality because of the preamps, and the architecture presents a host of possibilities to work with,” Bacelar explains. “It also works as a controller for Pro Tools or any other software I want to work with. It’s almost as if Duality were two devices in one: you can use it both as the input for the recording channels and as the controller for Pro Tools. This gives a lot of flexibility.

“It has analogue inputs and outputs, AES‑3, Dante, MADI, and these are precisely the protocols that we are using here in this studio. Due to its monitoring role, it also makes it easy to control different environments, which means that one moment we can work with stereo using the analogue console, and at the push of a button, we start working with Atmos, listening to all the different formats such as 7.1.4, binaural, stereo and 5.1.” 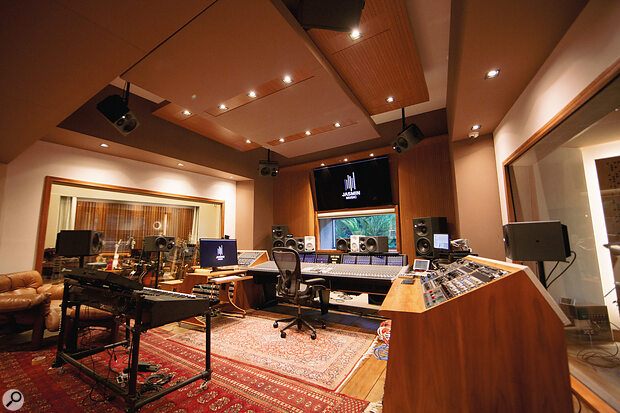 Jasmin Studio is equipped with a 7.1.4 Atmos monitoring system from Neumann.