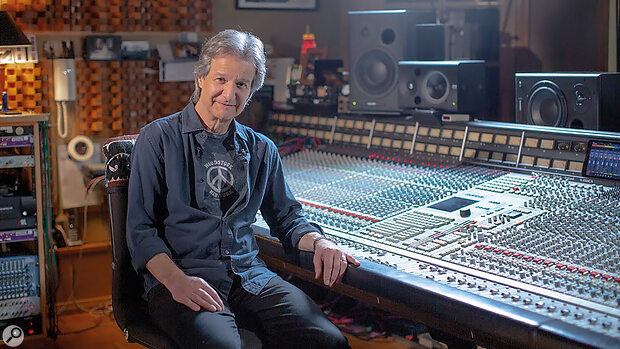 Bob in his home studio, with his famous SSL G‑series analogue console.Photo: Mix With The Masters

Can a legendary engineer create immersive audio mixes without giving up his beloved SSL console? Of course he can!

When stereo replaced mono, it took time before mixing conventions crystallised. Half a century on, we find ourselves in a similar situation with respect to immersive audio. There’s a strong demand for immersive mixes from streaming services, labels and artists, but there’s still relatively little agreement about how that demand should be met. Should music mixers employ the centre speaker and, if so, to what end? How should sources be divided between objects and beds? Should an immersive mix be a separate process, working from stems, or should it be done concurrently with the stereo mix? And should the surround and height speakers carry fundamental musical information, or should they serve a secondary role replaying ambiences and effects?

Ask 10 engineers working in Atmos, and you’ll get 10 different answers to all of these questions. Ask Bob Clearmountain, and you’ll get a particularly interesting and unique perspective.

Bob Clearmountain is, of course, one of the most successful engineers in the history of recorded music. He practically invented the role of the specialist mix engineer, more than 40 years ago, and since then his name has appeared on an extraordinary number of hit singles and albums. And, like many mix specialists, he’s embraced immersive audio. However, his methods and his philosophy are entirely his own.

One of the pioneering figures from the early days of stereo was Bill Putnam Sr, founder of Universal Audio. Putnam saw the potential of stereo well before most of his clients did so, and adopted a policy of mixing everything in the new format even when labels hadn’t requested it — a piece of foresight which paid off handsomely in subsequent years. And for the last two decades, Bob Clearmountain has quietly been taking a similar approach with respect to surround sound.

“When 5.1 was a thing for about a minute, 20 years ago or more, I didn’t want to know, because I thought ‘Jesus, people have trouble getting two speakers in phase, much less five or six!’ But my wife, Betty from Apogee Electronics, said, ‘You should be doing this, because this is the future.’ And so I woke up in the middle of the night one night and figured out how I could do that. I’m mixing on an analogue desk, and I realised how we could modify the desk and do it simultaneously while I’m doing the stereo. It really only added about maybe 10 minutes, tops, to the time it took me to do a stereo mix, because I was doing it pretty much simultaneously.”

Unlike stereo, 5.1 surround came and went without achieving mass‑market popularity, but Bob Clearmountain nevertheless kept on mixing everything in both formats. “It was so easy to do, and so much fun, and I really enjoyed the way it sounded, so I just kept doing it. I’ve got a whole server full of 5.1 mixes — pretty much they go along with every stereo mix I’ve done.”

And for someone who was already working in 5.1 every day, the initial step to Atmos was relatively small. “I had mixed the first three albums from a group called the Band who were really popular back in the ’60s for each of these albums’ 50th anniversary in 5.1. BMG and Robbie Robertson from the Band asked me to do that, and so those actually did come out in 5.1 recently. But for the fourth one, which is called Cahoots, they called up and they said, ‘OK, for this one, could you do an Atmos mix?’ And that first Band album came out really well, I think. I was still learning what to do with it, but it wasn’t that much different than 5.1 because I’d mixed hundreds of songs in 5.1 and so it’s just more places to put stuff!”

Bob Clearmountain has a relaxed attitude towards the adaptation of his studio for surround mixing. “In the early days I was involved in a paper about the proper way to set up a 5.1 system for mixing along with a bunch of other engineers like George Massenburg, and I remember there was a big discussion about ‘Where do you put the rear speakers?’ and ‘What’s the angle in relation to the centre?’ And I said, ‘Man, I put them where nobody will bump into them.’ I’m just using basically large bookshelf Dynaudio BM15As and then they’re on speaker stands in the only place that I can fit them and it works perfectly, you know? It’s been fine. A lot of it’s just practicality, you know?”

He adopted the same pragmatic approach to Atmos monitoring, with its additional height speakers. “Because the studio’s in the basement of my house, we had just redone the floors in the living room, which is right above where I’m sitting. While we did that, I put these pipes in, thinking, ‘If I ever have to put speakers in the ceiling, now I have a way of getting wires to them instead of them hanging off the walls,’ you know? And luckily I did that. So I added a couple more speakers to my 5.1 system so I had a 7.1 system. I found these little Sony speakers on the internet and stuck them on the ceiling. It’s a low ceiling so I didn’t want any really large speakers hanging off the ceiling. I didn’t want tall people to hit their head!”