Pro Tools lets you edit audio from the keyboard, without even touching the mouse. Here's how.

There are many advantages to working with the QWERTY keyboard rather than the mouse where possible. For a start, it's faster, and intensive use is less likely to give you repetitive strain injury. Pro Tools goes further than most DAWs in letting you work almost entirely from the keyboard. Last month, we explored mouse-free ways of navigating and zooming your sessions. This month, we'll look at how to perform common editing tasks. (Unless stated otherwise, assume that you need to have Keyboard Command Focus engaged.)

The first of these common editing functions was touched on last month: Trim Clip Start. As we saw in my previous column, if you have Tab to Transient active, you can then hit Tab to position the cursor at the next transient — which, in most cases, is likely to be the start of the wanted audio within that clip. Now hit the 'A' key and the area from the clip start to the cursor is deleted. If you want to delete multiple areas of unwanted silence, Tab through to the end of the phrase, maybe using the nudge keys (plus and minus on the numeric keypad) to position the cursor more accurately. You can then use Shift-Tab to select from the cursor to the next transient and hit the Delete key to remove the selection. Next, move on to the end of the section, place the cursor after the end of the wanted audio and hit the 'S' key to trim the end from the cursor position to the clip end.

The next keys along are about setting fades. In Screen 1,

Screen 1: A typical sequence of edits carried out using the mouse alone. First I cut out a section of 'dead' audio in the centre (first and second screens), then add a fade-in to the first transient in the next section (third screen). Finally, I have used Alt-Tab to return the cursor to the end of the wanted audio in the first clip, ready to add a fade-out.

there is a gap between verse and chorus that I want to tidy up. To eliminate the unwanted audio, I position the cursor just ahead of the chorus, use the 'A' key to delete it, then Tab to the next transient, hit the 'D' key, and Pro Tools creates a fade-up back to the head of the clip. Now I use Alt-Tab back to the end of the verse, with a little nudging if necessary to get the cursor in the right place, and then use the 'G' key to create a fade-out. Remember that Ctrl-Tab (Windows: Start-Tab) selects each clip in turn as you move along a track. Fades are no different, so you can use Ctrl-Tab to select one, and the nudge keys to move that fade left or right.

There is another editing shortcut that does several of these stages all in one go. If you make a selection and then use Command-T (Windows: Ctrl-T), Pro Tools will 'top and tail' that selection, as in Screen 2.

Screen 2: Instant trimming. With a section of a clip highlighted (top), Command-T removes the remainder.

Of course, the only way to check that edits have done what you want is to listen to them, and for these purposes, there are a number of auditioning keyboard shortcuts available to us. But first you need to be able to set and modify the pre- and post-roll settings, as the audition modes depend on these. You can use Command-K (Windows: Ctrl-K) to toggle on and off pre-roll and post-roll. To modify the settings, move the little flags on the ruler with the mouse, or use the keyboard: open the Transport window using Command-1 (Windows: Ctrl-1) on the numeric pad and make sure it's in extended view so you can see the pre- and post-roll times and which are active. Highlight the 'seconds' value and type in a suitable amount: my starting point is three seconds, but make sure you hit the Enter key on the keyboard. If you don't, the amount doesn't stick! You can also get the pre- and post-roll flags to snap to the cursor position. In Screen 3

Screen 3: When I Alt-click in the track (lower screen) Pro Tools activates pre-roll and moves the pre-roll flag to the cursor position.

Why is this useful? Well, suppose you're nudging some clips to get the timing and feel just right. If you were using the mouse, you'd move the region with the Grabber tool, then use the selector tool to place the cursor a little before the edit — but by doing so, you'd have lost your selection, so if it wasn't right, you'd have to select the region again, move it a bit, place the cursor and hit Play, and so on. The advantage of using the arrow keys together with the modifiers is that you don't lose your selection: the clip you're working with stays highlighted, so you can use the nudge keys to move it, and then use the appropriate modifiers and arrow keys to check the timing and feel of that little sequence. Try it out — once you get the hang of it, you'll find it so easy to work with! 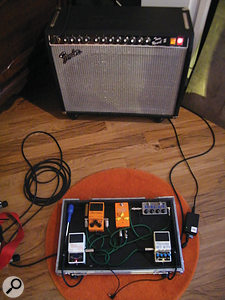 Pre- and post-roll status are indicated in the Transport window.

Without the mouse, the main way of moving clips around is to use the Nudge feature to move them left and right in small increments, so there are going to be times when you want to change these increments. You could mouse up to the toolbar and click on the drop-down menu to change it, but, as you'd hope, there are also keyboard shortcuts to change the Nudge value. Command-Alt and the plus key will increase the nudge value, while, correspondingly, Command-Alt and the minus key will reduce the nudge value to the next one down. You can thus fine-tune positions by starting with coarse Nudge values and progressively decreasing them.

I rarely see people using Nudge for more than moving clips around by small amounts, but there is another set of shortcuts that enables Nudge to do more. Holding down the Alt key and using the plus and minus keys will trim or un-trim the head of a selected clip. Doing the same with the Command key instead will trim or un-trim the tail of the selected clip, again all without touching the mouse.

What if you're happy with the position of the clip but not with the content inside it? Well, you could use the mouse to trim and un-trim the start and finish, and then use the Grabber tool to move it back into position. Alternatively, though, you can select the clip, and hold down the Ctrl key (Windows: Start key) while using the Nudge keys. In this mode, the clip stays still but the content within it moves back and forth.

So far, we have been working on one clip at a time. What if we wanted to move a clip together with all the other clips that come after it, in one go? No problem. Select the first clip, hold down Alt-Shift, and then hit Return (Enter). Return takes the cursor back to the beginning of the session, but remember: the Alt key in this context is the 'reverse gear', so Alt-Return will take the cursor to the end of the session. Adding Shift means that the cursor will highlight the clips as it travels to one end or the other of your session — so Alt-Shift-Return selects all clips from the cursor position to the end of the session. Then, when you use the Nudge keys, you'll be moving all the highlighted clips together as one selection.

I hope our workshops this month and last have inspired you to do more work without using the mouse. It'll take a bit of getting used to, but I think you will find it worth the trouble!

A useful Keyboard Command Focus shortcut is the 'N' key, which toggles Insertion Follows Playback. (You can also do this in Preferences or using the button under the Pencil tool in the toolbar, but using the 'N' key is so much easier!) With Insertion Follows Playback active, two things happen: selections are lost as you play through them, and when you hit Stop, the cursor stays where it is, like a tape machine would do. With Insertion Follows Playback off, selections are maintained, and when you hit Stop, the cursor jumps back to where it started from. The 'off' mode is great for editing, as it helps to hone the edit position, and if you have a section highlighted, Pro Tools will play the selection and then stop, with the selection remaining highlighted. The 'on' mode also has its uses, especially when you need to work your way through a session, but your selection is lost when Pro Tools stops. In practice, it's often very useful to toggle between the two modes: turn it on by hitting the 'N' key, let Pro Tools play through so you can audition the track as it plays, then when you find an area that needs work, hit Stop. The cursor will stay put, you can hit 'N' again to turn off Insertion Follows Playback and work on the section, auditioning repeatedly without losing your selection. When you're happy, hit 'N' to turn it back on and play the rest of the track. All of this can be done without the mouse.

The only time you might want to touch the mouse in this context is if it has a scroll wheel. Hold down the Shift key, and when you use the scroll wheel, you will be able to scroll along the session without having to mouse down to the scroll bar at the bottom of the Edit window.