Take Sonar back to the '60s with this vintage-style tape-flanging effect!

My frame of reference for flanging is sitting in New York's Record Plant, using the same tape-flanging setup that Jimi Hendrix used for Electric Ladyland (his sessions were booked in the slot before ours, and Vanilla Fudge had the slot after us. Ah, those were the days!). So that's the sound I always want to attain with flanging.

Several factors made tape flanging unique. First, there was always the thrill of potentially blowing up a tape capstan motor. But sonically, it was a combination of tape itself, the willingness to experiment with feedback paths within the console and, perhaps most importantly, the fact that with two tapes playing against each other, and one using variable speed, one tape machine could actually go forward in time compared to the other: a phenomenon called 'thru-zero flanging'.

Sonar's Sonitus:fx Modulator has a 'Tape' button that provides delays through zero, so why doesn't it sound like real tape flanging? The remaining tape-flanging characteristic that few processors emulate (I've only seen it in Virsyn's tape flanger) is the inertia of tape machines. Tape flanging was not the province of a precise LFO, but rather a sort of sloppy process where tape would speed up or slow down past the zero point. Although adjusting a tape's varispeed control essentially adjusted the frequency of a sine-wave oscillator (which was amplified to line voltage levels, and then went on to feed the capstan motor), the change wasn't immediately audible, because the motor couldn't react instantaneously.

As you've probably figured out, I wouldn't be going through all this history if I didn't have a solution for creating a highly accurate tape-flanging sound with Sonar. So switch on your lava lamp, light some incense and travel back with me to the psychedelic '60s and the world of groovy tape-flanging...

In case your memory needs refreshing, flanging occurs by mixing together a signal with varying delay and a dry signal, in equal proportion. Begin by inserting an instance of the Sonitus:fx Modulator in the track you want to flange. This track will serve the function of the variable-speed recorder. Then clone the track (including effects) to create a secondary track.

The cloned track provides the dry signal and is the equivalent of the fixed-speed tape recorder, but we'll delay it slightly so that the primary, varying delay can actually go forward in time compared to the dry track. Edit the cloned track's modulator for the following settings, as shown in the top of the 'Modulator Settings' screen shot: 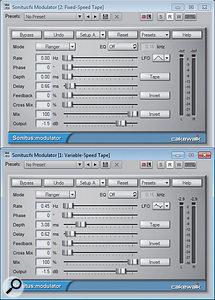 Modulator Settings: The upper Modulator is set to a fixed delay and provides the dry part of the flanger effect. The lower modulator allows for a variable delay to create the flanging effect itself.

Adjust the output to taste, but set the output levels identically for both effects. Their respective channel level settings should also match. Consider setting the channel Volume sliders to the same value and grouping them so that you don't have to be concerned about their levels not tracking. To group, right-click on one channel's Volume slider, select Group, and then pick one of the letter groups. Similarly, right-click on the other channel's Volume slider, and select the same letter group.

There are two basic ways to change the flanging tonality: phase and feedback. Here's a summary of how varying these parameters changes the sound.

Varying the cloned track's Mix Invert button changes the sound from 'positive' to 'negative' flanging. Negative flanging has a more hollow sound, and the cancellation that happens at the through-zero point is more intense because out-of-phase signals have a tendency to cancel anyway. (You can get the same effect by flipping the cloned channel's phase switch in Console view.)

Feedback adds a sharper sound, but there's little point in varying the feedback in the cloned track, as it stays at one frequency. With the primary Modulator, turning up feedback increases sharpness by enhancing the tone of positive flanging. Clicking on the feedback's Invert button gives the hollower, 'whooshing' sound associated with negative flanging.

Interestingly, if you switch the cloned channel's Mix Invert button, inverting feedback on the primary channel retains its essential character — positive or negative — regardless. Nonetheless, there's an interesting change in tonality.

Turning up the primary channel's Phase control creates a stereo spread by throwing the LFO out of phase for the left and right channels. Note that this doesn't cause problems if the track plays back in mono; the sound is the same as if the Phase fader was at zero.

These are the main variations, but all the permutations and combinations of feedback, phase inversion via the Invert button (for both the feedback and mix), Phase slider and Cross Mix slider make a difference to the sound.

A Mind Of Its Own

The key influence of the motor inertia was that the flanging effect would have something of a mind of its own as the tape drifted, but you could add a degree of control by how you used the variable-speed oscillator control. Let's now look at how we'll imitate that effect in Sonar.

The primary Sonitus:fx Modulator provides the 'mind of its own' part by retaining a constant LFO Rate, but we can place the rate under manual control so we can alter it from one moment to the next. This creates a fairly sensitive effect as slight rate variations have a major impact on the sound, and it really does feel quite a bit like varying a variable-speed oscillator speed control. If you don't change the rate, it changes anyway (unless it's set to 0.00), so when you alter it, you're sort of pulling the rate in one direction or another.

One of the hallmarks of '60s flanging was that it was often applied to the entire mix, not just individual tracks, as dealing with individual tracks meant involving a multitrack in the flanging process, which was tricky. It was often easier just to flange one two-track against another, and you can produce the same type of effect in Sonar.

The general concept is to create a second 'flanging' bus that parallels the master bus, and feeds the same output as the master bus (not the master bus itself). You then add a send that feeds the flanging bus to every track. The Send Assistant can make the process of adding all these sends much easier:

The only tweak you'll need to make is for the Flanging bus level. Adjust it for the best flanging effect. As with the per-track flanging example we can see in the 'Master Flanging' screenshot, you can write-enable automation for the Flanging bus Modulator, and write automation into the bus to simulate motor inertia. Now, bask in the glow of that lava lamp and the sound of your '60s 'tape' flanger...