It's possible to copy just a track's envelope, then paste it to another track.

Find out how to load REX files into Sonar, discover which digital audio editors work best with loops, and explore some useful envelope techniques.

With the Sonar 3.1 update settling in rather nicely, let's re-visit a couple of subjects we've touched on in earlier columns. Yes, articles can have updates too...

One of the aspects of ' Acid ising' a file (or, in Cakewalk-speak, turning it into a 'Groove Clip') is adding markers that tell the program how to timestretch the file. When you bring a standard audio file into Sonar or Acid, either program places default markers that represent a 'best guess' as to where these markers should go. However, their positions are seldom ideal, with the possible exception of when you're using simple patterns with sharp transients (for example, drum machine loops). I often end up spending several minutes tweaking the markers in a loop, using the procedures described in the March 2002 Sonar Notes. This can greatly improve sound quality when timestretching over a wide range.

However, after doing this tweaking it's sometimes necessary to process the loop further. While you can usually use a plug-in within Sonar, when correcting a problem with the file by using something like noise reduction, equalisation or limiting, it makes more sense to do destructive edits so that you won't have to make the same changes again in the future. Yet I've found that not all editors are created equal, nor do they create files that work similarly in both Sonar and Acid.

Assume you've tweaked a loop's markers, imported the loop into a digital audio editor, processed it, then saved it. Here's what happens when you re-import that file into Sonar and Acid.

Remember, though, that it is possible to process the audio within Sonar by applying plug-ins, and retain Groove Clip marker tweaks. But be careful: If you insert an effect in the FX insert bin and then go Process / Apply Audio Effects, the Groove Clip reverts to a standard type. Instead, go Process / Audio Effects, choose the effect, then click on 'OK' to apply the effect. For more information on this process, see the January 2003 column.

The bottom line is that if you want to process Acid ised loops outside of Sonar in a digital audio editor, Adobe's Audition gets the thumbs-up.

The Sonar MP3 encoder costs extra, but you can export to Windows Media Advanced Streaming and RealAudio G2 file formats for free. Go File / Export Audio and choose your format.

To insert markers from a MIDI pedal or key combination, go Options / Key Bindings and create a MIDI key binding for the Insert-Marker command.

If you need to undo a lot of operations, go Edit / History and choose the point to which the sequence should revert.

You can choose from six different Project timecode rates at Options / Project.

Put It In An Envelope

A reader writes: "The other day I was mixing down a piece containing two separate tracks of two takes of the same guitar piece. I automated the first of the two tracks by drawing a volume envelope on the track, and assigned a group (absolute value) to the volume control of both of these tracks. The first track followed the drawn envelope on playback but the volume of the other track, even though 'joined' using the same group, did not move. However, moving either track's actual volume fader caused the other track fader to follow along. Why is this, and how can I get two tracks to follow a single envelope?"

Once the MIDI sequence is in place, drag the slices saved by ReCycle on top of the notes, in the appropriate order. Delete the MIDI sequence when you're done.Grouping controls works only for user input; automation renders independently on all parameters. If you have an existing envelope for a parameter and want it to affect another parameter in a different track (it doesn't have to be the same parameter), you can simply copy the envelope to another track.

A somewhat easier solution when using a 'native' parameter such as volume or pan is to route both tracks to a buss and do your automation at the buss. If you know in advance that you're going to want two tracks with the same envelope, perhaps the easiest solution of all is to group the desired parameters, arm them, then record automation. Two envelopes will be recorded.

The July 2002 Sonar Notes described how to slice up standard WAV files in Sonar, to provide a non-Acid ising timestretch option based on the process behind Propellerheads' REX file format (which Sonar currently doesn't support). Since then, several people have asked if there's some way to load actual REX files into Sonar and have them play back correctly. There is indeed a workaround, providing you have a copy of Propellerhead Software's Recycle program.

A REX file works by slicing a file into pieces based on transients, much as Acid isation does. However, REX slices are discrete 'chunks' of sound that are triggered as if they were notes in a MIDI sequence; play the 'sequence' faster and the tempo speeds up, play it slower and the tempo slows down. There are some fine points, too. For example, if you slow the tempo below the original one, the slices retain the same duration and therefore drift farther apart, opening 'holes' between slices. A REX file can apply a variable amount of timestretching to note decays in order to fill in these 'holes' between slices. When files are sped up, decays are truncated so that start points remain undisturbed.

To bring a REX file into Sonar, first you have to save each slice out individually. Recycle 's heritage includes the ability to send each slice to a key on a hardware keyboard sampler, so there are provisions to save a REX file as a collection of slices. 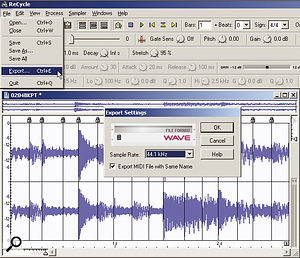 When you export the REX file, make sure that you also export a MIDI file with the same name, to serve as a template for where the slices should go.

There are some limitations to the technique. For example, if you slow down the tempo considerably, there won't be anything to fill the holes between slices. Often, drawing a fade at the end of each slice can make things sound a bit better. On the other hand, if you speed up, the end of one slice might overlap another. Here you may need to add crossfading, or slip-edit one slice's end so that it doesn't interfere with the start of the next slice. Remember, it's always the slice start time you want to preserve.

Interestingly, in one way this method improves upon true REX files: If a slice marker in a REX files lies in any area with lots of signal, there's usually a click during the transition from one slice to the next. In Sonar, sometimes you can eliminate this effect by adding a quick fade in/out or crossfade

To handle these slices as a group, draw a marquee around them. If you're certain of the tempo, go Edit / Bounce to Clip(s) so that they turn into one big clip, making it easier to drag the file around and copy it. You can even Acid ise the pseudo-REX clip if you slip-edit the end of the last slice to fall on a measure or beat boundary, then bounce to clip at the clip's original tempo (as found in Recycle at the start of this whole process).

Although Acid ising remains the most convenient way to timestretch files within Sonar, slicing in this manner can preserve fidelity a bit better for sounds with percussive attacks and short decays, such as drums and even bass or horn stabs.