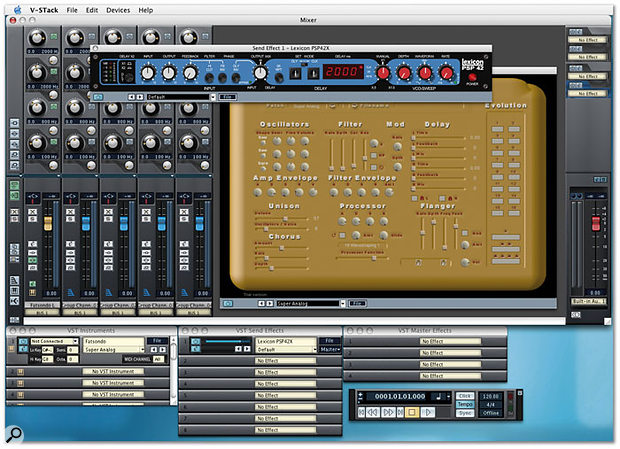 If you're suffering from kernel panics, if no one else can help, and if you can find a log file, maybe you should hire (well, read, at least) this month's Apple Notes...

Will the last developer of Mac audio-editing software please turn out the lights when they leave the building? It sounds bizarre, but that's the thought that occurred to me when, in a slightly surprising move this month, TC Electronic (which now encompasses the TC Works brand) decided to end development of their Mac-based audio-editing software, Spark. Currently at version 2.8.2, Spark has won many friends since it was originally released back in 1999, being one of the first audio applications to be ported from OS 9 to OS X. TC claim that the Powercore DSP systems account for almost 90 percent of the company's computer recording revenue, and for this reason the Native Bundle of plug-ins will also be discontinued.

While this will undoubtedly be viewed as fairly annoying by the existing Spark user base, TC have had great success with the Powercore platform, and such a change in strategy for the company is clearly a sign of the times, for want of a better cliché. It almost goes without saying that companies are finding it harder to generate revenue from audio applications that don't require any additional hardware. At least for effects, TC's new Powercore Element PCI card, priced at £516, will fill the void left by the Native Bundle, but it might be harder to find an alternative to Spark. The most obvious choice would be BIAS' Peak (www.bias-inc.com), which is certainly a mature stalwart of the Mac audio-editing world, although i3's DSP Quattro (www.i3net.it) is also worth a look, carrying, as it does, the torch of the classic Mac audio editing application D-Sound Pro.

Still, as some products depart, others arrive, with Steinberg (www.steinberg.net) bringing VStack to the Mac OS X platform with the newly released version 1.2. VStack is a host for running VST instruments on another system in addition to your main sequencing computer, and offers support for both VST System Link and Rewire. VStack offers a full onscreen mixer with insert and send effects, along with four EQs per channel, and supports master keyboard-type functionality for the layering of multiple VST Instruments on the same MIDI channel, with transpose and split capability. It's available as a direct download from Steinberg's web site, at 49.90 Euros.

Back To The Garage

Last month's Apple Notes was devoted to Garage Band, the entry-level sequencer supplied with every new Mac and available as part of Apple's iLife 04 bundle. Over the last month the Internet's jungle drums have been beating about a seemingly hidden feature in the version 1.0.1 update. Despite Garage Band 's entry-level position, v1.0.1 will act as a Rewire host so that you can run it alongside (and integrate with) applications such as Propellerhead's Reason and Ableton's Live. To use Garage Band as a Rewire host you'll need to make sure it's running before the Rewire client, but when you then run Reason or Live, the audio from that application will be routed through Garage Band and the transport controls of the two applications will be locked together.

Garage Band now makes a potentially ideal candidate for running alongside Live to provide some additional MIDI sequencing capabilities — but there's a caveat. A big limitation to using Garage Band as a professional tool is that it doesn't allow tempo changes to be created, and since a Rewire slave must follow a Rewire host in respect of the current tempo and time signature, Garage Band is only useful if your track doesn't need to contain any change in tempo. Hopefully the tempo issue will be addressed in a later version...

There's nothing quite like an OS X kernel panic to brighten up your day, much as there's nothing quite like the family pet being flattened by a delivery van. But seriously, while Mac users may have laughed at the so-called Windows 'blue screen of death' over the years, the sinking feeling you get when your Mac screen becomes elegantly darker and a message appears in five languages to inform you of the need to restart your computer doesn't make the alternative any easier to swallow. In other words, the error message may look prettier on the Mac, but the resulting restart and any subsequent problems are just as frustrating.

For most desktop or workstation users, OS X is actually a pretty stable operating system; and while I've yet to satisfactorily figure out how many days OS X should be able to stay booted without restarting, at least if an application crashes it rarely takes the whole system down. This is one of the many advantages afforded by pre-emptive multitasking and protected memory, of course, so if the system dumps rather violently with a kernel panic, you can be sure something slightly more serious has happened.

The main source of a kernel panic is usually a hardware related issue, or the associated low-level drivers used by OS X to access certain hardware devices. Bad memory can be the cause of kernel panics, for example, and it's surprising how often systems can be rendered unstable by having the wrong type of memory installed, or simply by faulty modules. For this reason, it's a really good idea to run the Apple Hardware Test CD-ROM supplied with your Mac, as well as running the memory test if you install new RAM, just to save yourself the pain of an unstable system later on. Running an early version of Pro Tools 6 under OS 10.3 also causes the same effect, and it's easy to forget this if you have an installer CD that predates the latest version.

Worm In The Apple? 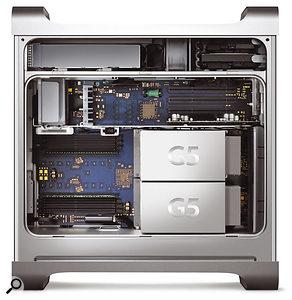 Power supplies are implicated in noise problems with some G5s.As I finish this column, there's a fair bit of back-patting being done by Apple on their web site about the Power Mac G5. But there's an issue regarding G5 noise that has left many users wanting to get even more physical with the company. The problem has been officially attributed by Apple to faulty power supplies in dual-processor machines (single-processor G5s are unaffected, as they use a different type of power supply). These PSUs can make audible sounds actually emanate from affected G5s, in addition to causing noise in the audio output signal from the computer — even, apparently, if you're using an external Firewire audio interface.

Users affected by this problem are being offered replacement power supplies by Apple, and unless your dual-processor Power Mac G5 has a 'Revision E' power supply unit it's possible that you could be one of these users. However, rather frustratingly, there are reports from G5 owners who, even after having their power supply unit replaced by Apple, are still experiencing the same problem. This is obviously of particular concern to those who use their Macs primarily for music and audio applications. I've spoken to several musicians who just assumed they had a ground loop elsewhere in their studio, until it turned out to be the G5 itself causing the problem.

Users have come up with workarounds to help the situation, although many such workarounds have been warned against by Apple. One very easy solution that's been suggested is to set your performance to 'Highest' in the Energy Saving System Preference, since this will reduce the power fluctuations caused by the processor switching states between its two performance modes. Contact your local Apple vendor or representative for more information about this issue and for advice on getting your G5's power supply replaced if you're affected.

For most hardware- and driver-related issues, a little more detective work is required, and the secret to your system's kernel panics can often be revealed in the log files stored on your hard disk. In general terms, a log file is, as the name suggests, a diary of events generated by an application or a service within the operating system. For example, installers usually produce log files that detail which files have been installed, or what parts of the system have been configured, during installation. And in the case of OS X, as with Unix, the system maintains many such log files for keeping track of services such as Personal File Sharing, Apache (for Personal Web Sharing), and a general System log that details pretty much every event during startup, shutdown and the use of your Mac, such as starting applications. 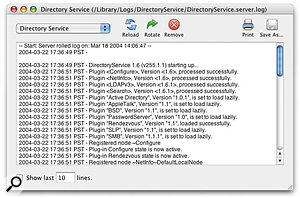 Cocktail's log manager makes it easy to browse, save and print the log files generated by OS X.While some log files can be found in the system and user Library/Logs folders, many such files are hidden from the user in the Finder by default, although you can still access them from the OS X Terminal if needed. On the other hand, if you don't fancy delving into OS X's command-line interface, there's a very handy utility called Cocktail (www.macosxcocktail.com) that can be considered a Swiss Army Knife for many 'under the bonnet' features behind Mac OS X's glossy Aqua veneer.

Cocktail features a log file manager, which makes it easy to view the main log files generated by the system on a given day. When your Mac dumps with a kernel panic, information about this is stored in the Panic log, which can be selected from the pop-up menu of logs in Cocktail 's log file manager.

As an example, I was recently trying to diagnose why a G5 was throwing up kernel panic errors a couple of times a day, and looking in the log files revealed that the 'IO Kit' drivers associated with PCI and Firewire hardware were causing the system to dump. The G5 had a MOTU PCI424 card inside it, and TC Powercore connected via Firewire, although the MOTU card potentially used both PCI and Firewire elements, since a Firewire-based interface is used to connect the external audio converters to the card. The log file therefore suggested that there was a conflict between the Powercore and the PCI424 card and, sure enough, disconnecting the Powercore has solved the problem.

This isn't a brilliant solution, though, since it means that there's a spare Powercore sitting around doing little else than making a rack look slightly more intriguing with its brushed metal and blue-LED-illuminated exterior. To be fair, there's probably nothing wrong with either device, but the combination of these two devices with this particular G5 proved to be toxic, and hopefully it's something that will be fixed with later versions of the PCI424 and Powercore drivers. However, this is a good example of how a little poking around in the more intimate parts of OS X can make your troubleshooting a little more reasoned and methodical.