For every destination you might have for your mix, there's a correct audio output format. We explain the options.

It was so simple in the good old days — or the 1980s, as we call them. When you had completed your magnum opus in Logic, all you needed to do was export the stereo mix to a file and burn it onto CD. Things are more complicated now: you may want to a create a stereo file suitable for sending to a mastering engineer, to pop off to MySpace, or to import into a video editing package such as Apple's Final Cut Pro. Logic's capabilities in the export and output department have come along in leaps and bounds over the years, and Logic Pro 9, in particular, addresses many of the requirements (and irritations) that users of the program have been asking Apple to address for some time.

If all you need to do is to drop your current mix onto a CD, Logic Pro has the ability to burn an audio CD or DVD‑A (for high bit/sample rates) directly from the program. Confusingly, this feature is buried in the File menu's Bounce window. Here you can select the device you want to use to create the CD and the speed of the burn. There's also a simulation mode, which can be useful if you want to check the veracity of the output and reduce the possibility of producing coasters. The only parameter here that you might not find in more conventional CD‑burning programs is Dither. Dither works by adding noise to the audio in a clever way that minimises the effects of quantisation error when you reduce word length, and should only be used if you're bouncing down to 16‑bit for the final version of your mix. Logic offers a few dither types, including Apogee's well‑regarded UV22HR, and you'll find much discussion on the Internet over which one is best. Some prefer the results with no dither applied at all! The only way you can decide which one you prefer is to do some critical listening tests, bearing in mind that the efficacy of the different types will vary with the kind of audio you're truncating. Before bouncing, make sure the correct time range is defined by the locators, as set via the Cycle mode or by directly editing the values in the Bounce window.

Logic can create many audio file types, and which one you choose depends on what you want to do with it afterwards. These days, most of us record 24‑bit files, and a growing number are exploring higher sample rates for (arguably) better audio quality. If your stereo mix is destined for further processing, it's probably best to bounce the stereo audio file 'as is': for example, if you've recorded at 24‑bit/88.2kHz, these are the settings you should select when choosing PCM (Pulse Code Modulation) as the output type in the Bounce menu. Of course, these bounced files can be re‑imported into Logic for further processing and then output in a different 'final' format. Staying with the Bounce menu, let's take a look at the options, first for file format:

Under the Mode option, you can choose Realtime or Offline. There are those who claim that real‑time bounces sound better than off‑line ones, but the most important reason you may need the former is when you are using any of Logic Pro's suite of MIDI processors in the Environment, such as the Arpeggiator or MIDI Delay. Otherwise, you can speed up the bounce quite considerably by using the off‑line setting. The 'Include audio tail' option stretches out the end of the bounce slightly to compensate if you're experiencing, for example, reverb tails cutting off, but I usually just extend the bounce well beyond the end of the song itself to make sure that this doesn't happen. The cryptic 'Bounce 2nd Cycle Pass' option creates the bounce file on the second pass and allows you to add the effects tail to the start of the bounce — though why you may want to do this, I have no idea!

Next up is the Normalize option. Normalisation is a process that drags the highest peak in a file up to 0dB and increases all other levels in proportion — including the noise. There are very few situations I can think of where you'd need to normalise a whole mix, but the option is there, along with the more sophisticated 'Overload Protection Only' setting, basically a limiter that prevents peaks from running hot past 0dB. You might find this handy when rough mixing in a hurry, for example.

So far, so stereo. But what if you're working in surround rather than plain old stereo? Logic Pro enables you to create a single multi‑channel file from a surround mix, but that's not much use if you want a TV or film audio editor to have extra control over the balance of the different elements of the mix, to correct for those moments where your music may overwhelm a voice or the singing chipmunk on the screen. To give editors this flexibility, you can use Logic to create so‑called 'stems'. These are independent audio files that contain sub‑mixes of your mix. For example, in a surround‑sound project destined for a video editing session, file one could be a stereo mix without the bass elements and anything destined to be panned centrally, file two could be anything you want at the rear of the surround mix, again in stereo, file three could contain the audio you want in the centre speaker, and file four the bass elements. The dub engineer could then place these left front, right front, left rear, right rear, centre, and sub, with full control over the levels of each section.

In Logic Pro, you'd generate these files by using auxes. Say you had 16 tracks you wanted to send to the various stems, as described above:

1. In this example, you want to route tracks 1‑6 to the front stereo pair, so highlight tracks 1‑6 in the mixer and route their outputs to a bus, in this case Bus 1. An aux is automatically created to receive this bus, so you would name it Front L&R.

Tracks destined for the Left and Right front channels routed to Bus 1 and Aux 1.

3. Highlight the auxes and select 'Create Arrange Tracks for Selected Channel Strips' from the mixer's Options menu. These auxes will then appear on the Arrange page as tracks. If you use the Pencil tool to create short empty regions on each of the aux tracks in the Arrange page, you can use the All Tracks as Audio Files option from the File menu to export these stems as audio files (along with all the other tracks, which you can discard). 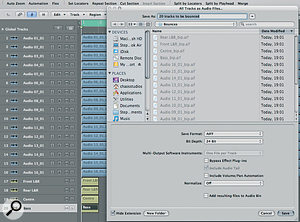 Exporting the stems (and tracks) to audio files.

Stems are useful in other situations, too. You might want to create stems containing various parts of a conventional stereo mix — say, stems of drums, bass, guitars and vocals — to send to a remixer, or even to a mastering engineer.

The All Tracks as Audio Files option mentioned above can also be used to render to disk each of your DAW tracks, whether audio, instrument or auxes, with or without automation and effects. This makes it easy to swap projects with other Logic Pro users — who may not have the same plug‑ins as you — for collaboration, or for them to mix. You can also export for use in other DAWs, which could be useful if you want to take your tracks to a 'pro' studio that exclusively runs Pro Tools.

Logic Pro 9's collection of output options makes it easier than ever to finalise, compile, distribute, master and share your work with others. Now all you have to do is actually finish the damn songs!