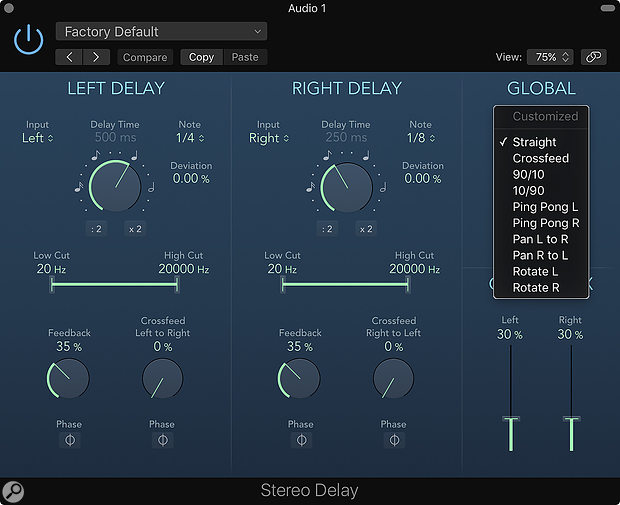 We serve up some fresh ideas for vocal processing using Track Stacks in Logic Pro X.

In this month’s Logic workshop we will create a Track Stack for processing lead vocals. By taking this less conventional path, we’ll use a Track Stack to encapsulate the vocal track and its effects sends, and explore some of the advantages of this approach.

We’ll also dive into Logic’s Stereo Delay plug-in, looking at how you can use the key features of the effect to maintain separation between the delay repeats and the dry vocal. We’ll then add reverb and compression to make the vocal sound ‘bigger’, looking at which parameters we can tweak to stop the vocal losing its position at the front of the mix. To finish off we will assign the key parameters from our effects to Smart Controls so that we can tweak them easily in one place.

Begin with an audio track with a lead vocal recording on it and name it Lead Vocal. Add any basic processing such as EQ and compression so the dry vocal is ready to use. On the Lead Vocal track create a send to an effects bus and name the bus Vocal FX. Now, let’s create the effects chain on the Vocal FX bus. As we add effects let’s consider how we can maintain separation between the Lead Vocal and the Vocal FX. On the Vocal FX bus add an instance of Logic’s Stereo Delay plug-in. The UI is divided into four sections: the Left Channel, the Right Channel and the Global and Output sections. The Stereo Delay is useful for when you want the delay effect to stand apart from the mono source since it adds width to a signal or movement across the stereo field.

By default the Stereo Delay plug-in loads as a ‘Straight’ stereo delay where the left channel is delayed by a 1/4 note and the right channel delayed by an 1/8th note. As the left and right channel delay times are multiples of each other we can increase the width of the Stereo Delay by using the Deviation parameter to offset them slightly. To do this, set the Deviation for the Left channel to -1 percent and the Deviation for the Right channel to +1 percent. Offsetting the left and right delay times by a few milliseconds will ensure they never sound exactly at the same time, which creates extra width.

The Stereo Delay has many potential setups and the Routing parameter (see Screen 1, above) makes auditioning different options quick as it contains a series of preset snapshots for the Feedback, Crossfeed and Input parameters. This lets you quickly jump between these different behaviours. Go to the Routing field and from the drop-down menu choose Ping Pong L. The following things will change from the Straight setting: the Left Input field will be set to L + R whereas the Right Input field will now be OFF, meaning only the left channel will receive our input signal. The Left and Right Feedback controls will be set to 0 so, initially, it may look like there is no feedback. However, the regular Feedback controls are simply replaced by the Crossfeed Left/Right, Crossfeed Right/Left controls. Experiment with the different options in the Routing field. For the vocal I was processing I preferred a tweaked version of the Ping-Pong setting as it was more distinct from the dry vocal giving it width but without cluttering it.

We can use the Low Cut and High Cut filters to make the Vocal FX distinct from the dry vocal. I chose to remove some bottom and top end, and found that values 160 to 5300 Hz worked best for my vocal. Here, the duller delay was less distracting and commanded less attention than when the timbre was the same as the Dry signal.

Now that we have our delay sorted let’s explore another common vocal processing technique by running the delay into a reverb processor to create a hybrid delay/reverb effect. As we are going to input the Stereo Delay into a reverb, set the Left and Right mix parameters to around 30 percent. After the Stereo Delay insert an instance of Logic’s Space Designer reverb plug-in. Rather than loading an Impulse, let’s just use the algorithmic generation that occurs in its default state. As a starting point, set both the Dry and Rev controls to -8dB so that you have equal delay and reverb, then adjust the Dry/Rev control ratios to taste. Turning up the Dry control will increase the Delay signal, whereas turning up the Rev level will give you more of the delay signal drenched in reverb.

Now let’s copy our Stereo Delay plug-in so that we can compare adding delay pre and post reverb. We have created Input Delay > Reverb > Output Delay. Experiment by comparing the results of the Input Delay generating repeats, compared to the Output Delay; do this by bypassing each of them in turn.

Ducks In A Row 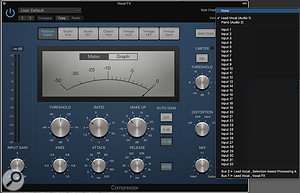 Insert Logic’s Compressor plug-in after the last Stereo Delay effect and choose the Lead Vocal track from the Side Chain drop-down menu located in the top right of the plug-in window. Adjust the Threshold and Ratio controls to achieve the desired amount of ducking.

Now that we have our basic lead vocal chain we’ll simplify the interface. Put the Lead Vocal track and the Vocal FX bus into a Track Stack and assign the key effects parameters to Smart Controls. Go to the Mixer and Ctrl-click on your Vocal FX bus mixer strip and, from the pop-up menu, choose Create Track. In the Workspace area, select the Vocal Track and the Vocal FX bus and Ctrl-click on one of their track headers. From the menu that appears, choose Create Track Stack. Then, from the pop-up menu choose Summing Stack and name the summing bus Lead Vocal Stack. From within the Track Stack select the Vocal Effects Bus and show the Smart Controls panel. Press the (i) to reveal the Inspector so that you can configure the Smart Control interface.

Let’s divide the interface into Input Delay, Reverb, Output Delay, Ducking and Volume. From the Inspector choose the Modern Black 66 template and configure the first knob and accompanying button to control the Stereo Delay. To do this, click on knob one and then assign the ‘Stereo Delay - Mix Left’ parameter. Click the settings icon and select Add Mapping, then repeat the assignment process for ‘Stereo Delay - Mix Right’. Assign the accompanying button to Main / Insert 1 Bypass. You now have a knob to add delay and a button to bypass it. Do the same thing again, assigning the key controls and a bypass from the other effects until you have a completed Smart Control layout.

Screen 3: My finished Smart Control layout contains all the main controls from the different effects on the Vocal FX bus so that I can quickly try out different processing ideas. I added Chorus, Sample Delay and Low and High Cut filters to finish off my chain.

Once you have got the hang of this you may want to add more effects to the Vocal FX bus and assign them as well. Screen 3 shows my finished effects layout in which I added Chorus, Sample Delay and Filtering to my Vocal FX bus. This Smart Control layout will be displayed whenever the Vocal FX bus is selected. Repeat the same exercise for the Lead Vocal track and the Track Stack summing bus, adding the effects you might use and assigning them to their own Smart Control layouts. Lastly, save the Track Stack by going to the Media Browser and hitting the Save button in the bottom right-hand corner.

To feel the full power of Track Stacks, open a new project, select your vocal track and go to Media Browser / User Patches and load your preset; the audio track will be replaced by your entire Lead Vocal setup with all the routing and Smart Controls ready to go.