Logic Pro X: Making The Most Of Amp Designer

Get the most out of Logic's Amp Designer plug-in.

I know a number of Logic users who have tried Logic's Guitar Amp Designer plug-in, skimmed through the presets, and then dismissed them as less authentic than some of the third-party options. That may not be entirely fair, as with a little perseverance, it is possible to coax some extremely usable sounds out of it. 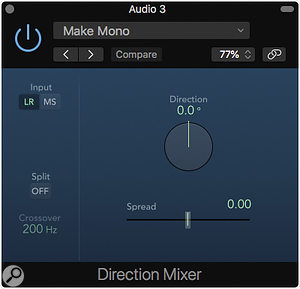 In order to achieve a stereo signal chain for a mono guitar input, you'll need to use a stereo channel with the Direction Mixer plug-in inserted first in the signal path. This allows you to send your DI'ed guitar to different left/right processing setups.As a rule, amp modelling works well enough for clean sounds and also for heavily distorted, edgy rock sounds — it's when you want something that falls in-between the two that you have to work a little harder. While the focus on this Logic workshop is on getting the most out of Amp Designer, I like where possible to put some analogue pedals before the input to my audio interface rather than relying on Logic's pedalboard for everything. Pre-conditioning the sound using a light overdrive is a good start if you're after a bluesy/classic rock sound — or use your favourite compressor pedal if you need a clean sound. As well as ensuring you have the right input impedance, using analogue pedals helps round off any sharp peaks that might cause brief converter clipping, which in turn makes the attack of the notes sound more natural. And don't be tempted to push your record levels too high — peaking at around -10dBFS is more than loud enough.

The Duality Of Mono

One of the more useful additions to Logic Pro X is the ability to call up certain plug-ins in Mono, Stereo or Dual Mono mode. If you call up a Dual Mono plug-in you'll see L and R tabs that let you view and adjust the left and right channels independently. This opens up some interesting creative possibilities, particularly when it comes to guitar processing.

To make use of these Dual Mono plug-ins, we need a stereo channel — even though the guitar input (or pre-recorded dry track) is probably mono. My approach is to set the track to stereo input, then instantiate a Direction Mixer plug-in (from the Imaging plug-in menu) and adjust its Spread fader to give zero stereo width — which puts your mono input equally into the two channels. 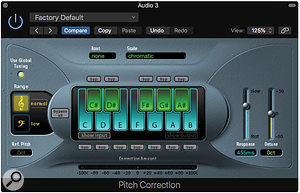 A Dual Mono instance of the Pitch Correction plug-in will let you achieve a natural-sounding double-tracked effect.If you want a safety net to ensure your bent notes end up in exactly the right place, then put an instance of Logic's Pitch Correction after it set to Chromatic and with a slow correction speed — about half way up on the correction speed fader. This allows your bends and wobbles to pass through intact but any long sustained notes will land on an accurate pitch. This might sound like a bit of a cheat, and it won't work quite so well if you like to use those slightly off-key blues bends, but it can also be used creatively by setting different correction speeds for the two sides of a Dual Mono instance, to introduce small changes in pitching when notes are being bent. This helps cement the fake stereo double–tracking illusion that I'll cover later on.

A little compression before any amp modelling can help make the sound feel more springy. If you haven't got a compressor pedal you can always just use a plug-in — I like to use the Logic X Opto or Vintage FET compressor models set to an attack time of 10 to 20 ms and a release time of maybe 50ms. A ratio of around 4:1 usually works well, then adjust the threshold to get between 5 and 10 dB of gain reduction on the loudest peaks. This doesn't sound too obviously compressed but adds a bit of life to the guitar sound. 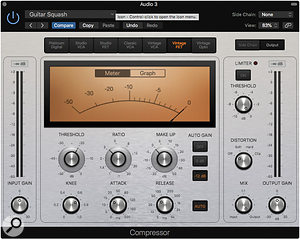 Placing a compressor early on in the signal path will help smooth out the 'spimky' DI signal.As any amp or pedal designer with tell you, EQ is a powerful pre-treatment, as the overdrive section of an amp or pedal will react differently according to the EQ of the input. I'm planning to use a Dual Mono amplifier for this example so I've put a Dual Mono Channel EQ after the compressor, dialling in a few dB of mid-range boost between 1 and 2.5 kHz, depending on the sound I'm after. If you make the centre frequency a little different on the two channels, that will also help create a bigger stereo image. Using mid–boost EQ in this way helps sharpen up the amp sound without making it 'fizzy'.

Some users suggest feeding two chains of amps and effects from buses, but to play without annoying latency, it is necessary to engage Logic's Low Latency button, and this disables bus sends as well as plug-ins that cause long delays when active. (If you can't see this button, go to Customise Control Bar and Display by clicking and holding on the down arrow at the right of the bars/beats window in the transport area, then tick the Low Latency box to add it). After recording, click off the Low Latency button and all your tardy plug-ins and buses come back to life. Using buses is no problem if you are treating a dry guitar track you've already recorded, but if you want to hear something like the final sound as you record, bus sends are probably not the way to go.

As a rule, amp modelling works well enough for clean sounds and also for heavily distorted, edgy rock sounds — it's when you want something that falls in‑between the two that you have to work a little harder.

Now we can insert a Dual Mono guitar amplifier, the advantage being that we can have different amplifiers and/or speaker and mic models on the two channels. Which amplifiers you choose depends on the sound you're out to achieve, but a useful tactic is to choose an amplifier and speaker combination that delivers a bright attack for one channel with perhaps a warmer sound that has more body to it for the other. By mixing them using the amplifier output level controls, you should be able to get a solid sound that still has a well-defined attack. One often–overlooked feature of Logic's guitar amplifiers is that if you click EQ above the tone controls, you'll see a menu offering alternative EQ types, and they all sound distinctly different. If the amp sound is too dull or too edgy, try a different EQ.

It's well worth experimenting with different amp and cabinet models. The virtual microphone position can also make a big difference to your final tone.

Amps load up with default choices of loudspeaker cabinet but again you can mix and match to get closer to the sound you're looking for. Speakers make a huge difference to the sound and, in very general terms, the smaller speakers tend to sound thinner and brighter whereas the larger ones have more low end and less 'edge' to the sound. There's also a huge difference between the various 12–inch speaker types, with the mic type and position offering yet more variation. As a rule, putting the mic close to the centre of the speaker cone gives the brightest sound whereas moving it away and to one side gives a warmer sound. The SM57 model has a bright, slightly nasal character while the ribbon mic model has the warmest sound.

For bluesy overdrive tones, adding just a small amount of dirt using a pedal at the input combined with a modest amount of amplifier gain will usually get you close to where you need to be. For a clean sound I'll often pick something like a Fender or Vox amp model on one channel and a clean preamp on the other channel, with the speaker emulation bypassed on the clean preamp channel. Mixing a clean DI'ed sound with an amp emulation sometimes gets you a sweeter clean sound than using an amp emulation on its own. If you don't want the two sounds panned hard left and right, you can use another instance of Logic's Direction Mixer plug-in, after the Amp Designer, to narrow the stereo field or even collapse it to mono. 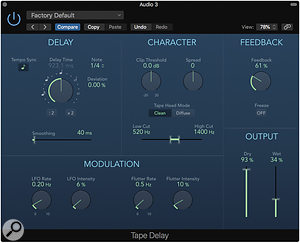 Try using different delay settings for the left and right channels, to give you a wider guitar sound.For those big rock solos, delay often works better than reverb, and if you put a Dual Mono version of Logic's Tape Delay after the amplifier, you can then use the Deviation control to the right of the delay knob to shift the delay time slightly away from the tempo-locked value. A useful setting is to have both sides of the delay set to quarter notes, but then set the Deviation to around +1 percent for one channel and -1 percent for the other. I also tend to set the LFO modulation to be slightly different on the two sides too.

And if you want a really wide double-tracked sound, use a Dual Mono version of Logic's Pitch Shifter plug-in, set to +4 cents on one side and -4 cents on the other. This could go anywhere after the amp plug-in, though I generally put it directly after the amp. Set each channel to 100 percent wet, select the Timing mode as Pitch Tracking for one side and Manual for the other, then set the Manual channel's Delay slider to around 15ms. This spreads both the pitch and timing of the two amplifiers very slightly, producing a decent double-tracked sound. 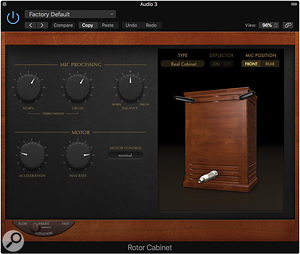 The Rotor Cabinet plug-in is great for adding a bit of warmth to your sound when set to its 'Brake' mode.Another useful trick that you can use if the finished guitar sound still comes across as too hard or edgy is to insert Logic's Rotary Speaker plug-in, but set the speed control to its Brake position so there's no modulation. This adds a lovely warm character to the sound. You can experiment further by changing the rotary speaker type in the box just above and to the left of the picture of the speaker. They all sounds very different, though I usually find that one of the the first three sounds best. If you're an old hippy like me, turn the speaker motor back on and enjoy the swirls.

I'm sure there are lots of other strategies that can be employed to create usable guitar tones — after all, every guitarist has their own ideal sound in their head, which is what makes the electric guitar a truly unique instrument. The ones described here work for me most of the time and when I come up with a chain of plug-ins that gives me a useful sound, I save it as a channel preset so I can call it up again when needed. If you were disillusioned by the presets, give these simple techniques a try as I'm sure you'll come up with something useful.