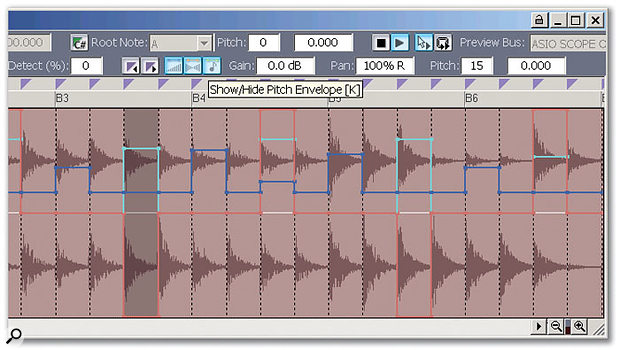 Sonar 4 has excellent loop editing facilities, and here we're going to show you how to use them.

When Sonar first appeared, one of its strengths was the ability to create, edit and save WAV files that could stretch automatically with the project tempo and pitch. Previously, this type of convenience was pretty much the domain of Sony's Acid software (originally introduced by Sonic Foundry). Although DJs and groove-orientated musicians took to this concept initially, over time loops have worked their way into a variety of musical genres, including rock and soundtracks, and while many musicians are content to get their loops from sample libraries, quite a few are creating loops from their own recorded material. For example, if a guitarist plays a great lick, sometimes it's worth repeating as a motif in different parts of the song. Even if you only ever use commercial loops, it's important to know how to edit them because, sadly, a lot of sample CDs are carelessly 'prepped' and do not stretch well over a range of tempos.

Sonar 's Loop Construction window is the centre of activity for editing, creating and saving stretchable loops, which Cakewalk call 'groove clips'. We've covered some aspects of looping before in Sonar Notes, but Sonar 4 added several new capabilities (facilitating some rather nice special effects) to the Loop Construction window, so there's still plenty left to talk about.

To make this article as hands-on as possible, I'd recommend that you download my example loop from the SOS web site (

sonarloop.wav). This is a file from my AdrenaLinn Guitars sample CD (but with the groove clip characteristics removed). We'll use it to illustrate the various points in this article. 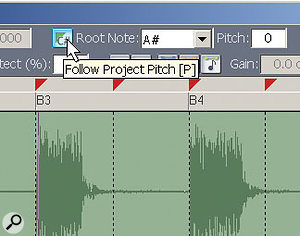 Here's the way to make a loop follow any key changes in the Project, as set by the Project pitch value.For melodic loops, enter the original key (the one the loop was recorded at) in the Root Note field. If you want the loop to follow the Project pitch, click on the 'Follow Project Pitch' button. In the case of an unpitched sound (such as a drum loop), you probably want the pitch to stay constant regardless of what's happening in the song, so make sure this option is not enabled.

A Sonar groove clip embeds pitch and tempo information into a standard WAV file's header. This information instructs a compatible host how to play back the file in the face of varying tempo or pitch changes. The more accurate and detailed the pitch/tempo information embedded in the file, the better the stretching quality during playback. Sonar 's groove clips are compatible with the ' Acid ised' file format that was introduced in the Acid loop-based composition program; in fact, you can load ' Acid ised' files into Sonar and Sonar groove clips into Acid. 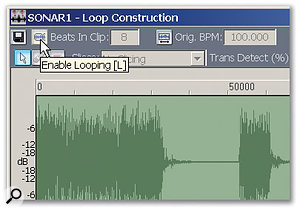 Clicking on Enable Looping turns the clip from a standard WAV file into a Groove Clip.

The underlying technology that allows such advanced loop manipulation is DSP-based. The basic idea is to create 'slices' of audio at transients, add or remove samples to lengthen or shorten the loop respectively, then crossfade these segments to smooth any transitions within the loop. Some wonder how this differs from REX files. Well, in the case of the latter, minimal DSP is applied to the slices, so audio quality is virtually unaltered. However, REX files are best suited to percussive material, as putting slices in the middle of a sustained tone produces an audible discontinuity. With DSP, crossfading within a sustained tone hides these kinds of problems.

There are limits to the stretching abilities of groove clips. If you slow down the loop too much, you'll hear artifacts as the algorithms struggle to insert samples that extend the material. Speeding up is less problematic, as it's easier to remove existing material than create new material that never existed previously. This is why pro loop-library designers often record their loops at slower tempos, if possible. 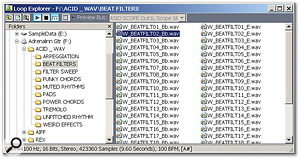 A loop has been selected for auditioning. Double-clicking on the loop inserts it into the Clips pane.There are several ways to bring a file or loop into Sonar:

The Loop Explorer (View / Loop Explorer, or type Alt+1) provides a way to locate and audition loops, as well as see their properties. If the loop is a groove clip or Acid ised file, it will play back at the Project tempo as you audition it (see screen below).

The Loop Explorer is laid out like Windows Explorer, with a tree structure to the left for navigation. Files are displayed in the right pane, and when you click on a file its properties (sample rate, bit resolution, number of samples, length in samples, original tempo and original key) appear in a line at the bottom of the window. 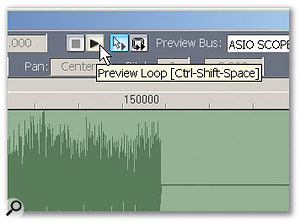 Click this button at any time to hear the loop play.

The toolbar in the upper left has two distinct sections. The three buttons to the left relate to navigation. From left to right, these are:

The next three buttons to the right control auditioning. Again from left to right, we have:

Once playing starts, unless Auto is enabled a file will continue to loop until you select another file or click on Stop. Either of these actions stops the file from playing. If Auto is enabled, the only way to get the Loop Explorer to shut up is to click on Stop. If you double-click on a file in the Loop Explorer, the file will be inserted into the active track, starting at the Now time.

The rightmost toolbar button has a drop-down menu that chooses the display mode for the right pane: you can choose a list format, details, small icons or large icons. Another item, Folders, shows or hides the left pane. To the right of this button is the Preview Buss drop-down menu, which provides a list of available outputs over which you can monitor the loops. Finally, note that there's a splitter bar between the left and right panes, so that you can change the proportion of the window taken up by each pane.

Bring the example file W_FUNK04_Bb.WAV into Sonar, and we'll turn it into a groove clip. 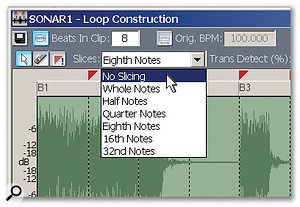 There are several semi-automatic options for placing slices within a file, but we'll do some of it by hand.

When you play the clip, you'll hear that it contains several guitar chords. What we'll do is put a slice at the start of each chord's attack, so each chord lives in its own slice. 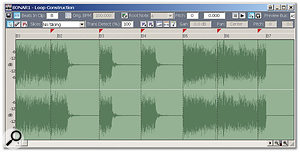 A drop-down 'Slices' menu puts slice markers at specific intervals. This can save time if you're slicing something like a drum-machine pattern with a regular 16th-note hi-hat pattern; set the slices to 16th notes and you're probably done. In fact, if you set the Trans Detect percentage value to '0', slices show up only at the interval you specified. I'm not going to make things that simple, because this is a guitar part played by a human! So we're going to add slices manually.

Another problem with slowing down tempo is that sustained sections can sound uneven, because a fairly long section is being stretched. We can remedy this problem by adding another slice marker in the middle of long sections. For example, when you preview the file at 70bpm, note that the first slice suffers from a little 'wavering' Add a marker in the middle of this slice and the wavering goes away. Try the same technique with the slice that begins at beat five as well. 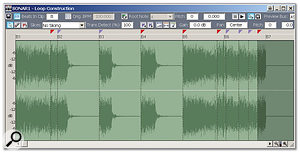 Note the three slice markers added just before each chord's final decay. These help create a more realistic sound when you slow down the tempo.You can tweak groove clips forever, but this one works pretty well from about 80bpm to 180bpm. More tweaking won't improve it that much.

Sonar 4 added the option to change pitch, pan and gain for each slice. This works in a very similay way to standard envelopes, although changes are quantised to each slice, and you can't change values within a slice. In other words, an individual slice can't fade out or pan from left to right — it will be set at a constant level or constant pan position.

Edits can be done graphically or by entering numbers in fields. For graphic editing there are three toolbar buttons, each of which shows/hides an envelope (orange for pan, light blue for pitch and dark blue for gain). Drag the envelope within the slice to edit it (see the screen on the first page of this article). The only significant difference between graphic and numerical editing is that when you're working graphically you can change pitch only in semitone steps. When you're doing so numerically there's a field for semitones and another field for fine-tuning. There are some limitations — gain changes might produce pops if there are significant level shifts, for example — but being able to change these parameters offers tremendous creative latitude.

I'm sure you don't want to do all this tweaking again, so now you should save the file. Either of these options will save it as an Acid ised WAV file: either drag the loop from the Clips pane to your desktop (or to a folder on your desktop), or click on the floppy disk ('Save Loop to WAV File') button. Happy looping!