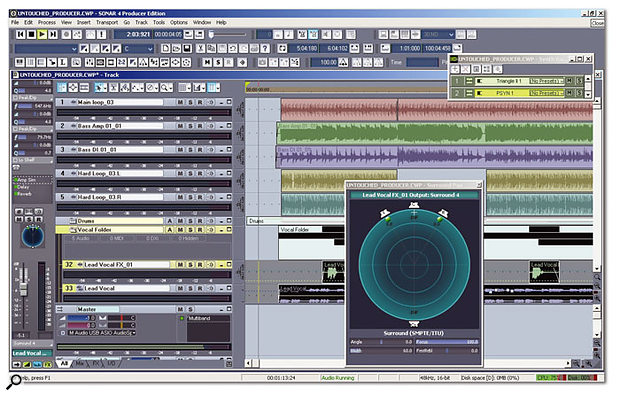 More screen space without having to buy a second monitor — just one of the Sonar nuggets we've got for you this month...

With any modern sequencing host, not just Sonar, it seems there's never enough screen space. Although Sonar lets you save screen layouts and recall them, it's not as useful as a dual-monitor system. If you've found yourself wanting a way to organise your desktop differently, visit www.fatfreesoft.com/2desk.php and download Double Desktop. This efficient system-tray utility doubles the width of your desktop, then lets you switch between the two halves using an arrow button in the system tray (or a hot key). Best of all, it's free for non-commercial use.

You might set up the console view in the 'extended' desktop while the main desktop shows the track view, which you would do by 'pushing' the console into the other desktop, switching, then dragging it the rest of the way. It stays there until you exit the program. Or you could drag all your soft-synth interfaces to one desktop and switch between working with Sonar itself and editing synth sounds. What's more, if you're already running a dual-monitor system, each desktop becomes a dual-monitor desktop, so essentially you have two pairs of two screens.

To make it easy to know which desktop you're on, you can choose different wallpaper for the second desktop and change icon label colours separately for both desktops. To return to normal, just exit the program. Over the couple of months that I've been using Double Desktop I've experienced no stability problems or other glitches.

When you clicked on the Install option of the Sonar 4 installation disk, there's a good chance you clicked 'Install Sonar 4 ' and left it at that... in which case you may have missed the options to install some MFX (MIDI FX) and utilities.

To install these, close any open programs, then insert the Sonar installation CD (you won't need the serial number for this aspect of installation). Click on 'Install', then on 'Install Utilities'. Each of the utilities, as follows, needs to be installed separately:

The 'Install MFX' option on the installation disc lets you install several MIDI effects: JMT Orchestrator, Music Lab MFX, and Ntonyx MFX. Each of these must be installed separately. In a future column, we'll cover these under the broader topic of MIDI plug-ins and Sonar.

Emu make some fine interfaces (1820M, 1820, 1212m and 0404) that not only run the Proteus X and Emulator X soft synths but also provide audio interfacing. Quite a few people run Sonar with these interfaces, but some have reported inconsistent operation. The good news is that you can now go to www.emu.com/support and download the Digital Audio System/Emulator X Driver patch V1.8 (if you're using the Emulator X or Proteus X, you should also download their version 1.5.1 update).

Version 1.8 has several enhancements, including better ASIO behaviour when used with Sonar, as well as improved ASIO/WDM recording performance during bursts in PCI-buss activity (this helps to minimise recording drop-outs). The new version also fixes a bug that caused Sonar to crash when using ASIO at a sample rate that differed from Patchmix DSP 's rate. There's improved PCI performance and greater PCI-buss utilisation efficiency, and the ASIO driver now recovers fully after an ASIO application crashes or terminates prematurely.

Here's a documented but not commonly known tip presented by Sonar aficionado Jeff Noel in Cakewalk's user forum. If you Ctrl-double-click on individual MIDI Clips, each will open in a separate Piano Roll View window, instead of the standard Multiple Track view in a single window. Jeff points out that this is especially helpful when you're building multi-voiced bass lines with multiple instances of a program such as Spectrasonics' Trilogy.

The normal font size in Sonar 's Track View is usually fine — unless you're overdubbing on an instrument located several feet away from the computer screen. Fortunately, it's easy to up the font size a bit by altering Windows' default DPI (dots-per-inch) setting.

To increase the font size, right-click on the desktop and select Properties. Don't go to the Appearance tab and attempt to adjust the font size there; doing that will affect Windows, but not Sonar. Instead, click on Settings, then the Advanced button, then the General tab. Under display, change the DPI settings drop-down menu value from 96 DPI to 120 DPI. You'll be informed you need to restart the computer before this setting takes effect. Click on Apply.

You'll then be told whether you need to install the font files from your Windows CD-ROM or network, or already have them on your system. Choose the appropriate answer (usually Yes), then click on Close to close the Display Properties window. Restart and enjoy your easy-to-read fonts!