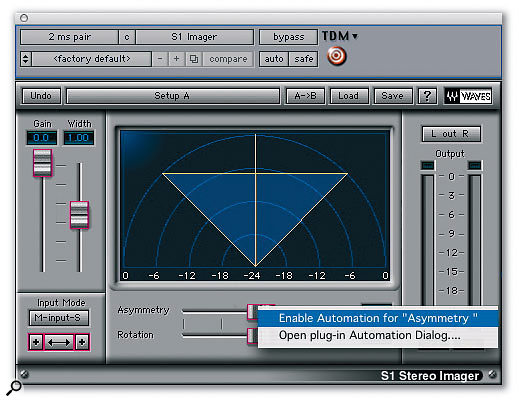 Clicking on a plug-in parameter with the Ctrl Command keys held enables automation for that parameter.

You'd be surprised at the things you can do without opening a menu in Pro Tools. And if there's no shortcut for the command you need, why not create your own?

It's another keyboard shortcut-fest this month in our regular guide to getting more from Pro Tools. Following our look at the Keyboard Focus, I think it's time to introduce some of the more obscure shortcuts. Most of these are available on both Mac and Windows versions of Pro Tools, but some aren't documented at all, so they might be new to many readers.

I am sure many of us automate plug-in settings by clicking on the Auto button in the plug-in window, selecting the parameter, adding it to the list and clicking OK, then selecting the correct parameter on the audio track, missing it in the list by mistake and having to try again! For us, there is a really useful shortcut. It turns automation on for your chosen plug-in parameter and switches to the automation data display on the track in two very quick and easy steps...

That's it! Now you are ready to edit the automation graphically.

Using The Trim Tool To Fill

Have you ever wanted to trim out a region precisely to a preceding one? Well you can: by holding down the Ctrl (PC: Start) key whilst trimming, Pro Tools will stop at the preceding region's edge. This works with the Trim tool in TC/E mode, too, thus enabling you to precisely fill or stretch to fit a gap. Neat!

To add breakpoints (or anchors) in any graphical automation you can click with with the Grabber tool, but there are alternatives. On the Mac, you can use Option+'/', which is really nice, as there is a '/' key above the right-hand Option key on most keyboards. On the PC, you simply right-click.

To access graphical automation data more easily, you can use Ctrl+Command-click (PC: Ctrl+Start-click) in the Edit or Mix window to change the display as follows:

On the Mac, adding the Option key to any of the above will make the change to all tracks. These shortcuts work on both the Mix Window and the I/O section of the Edit window. 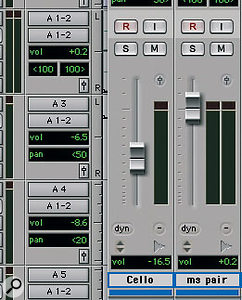 Clicking on the meters with all three modifiers held switches them to 'fat' mode.

Mac Users: Create Your Own Shortcuts

For Mac OS 9 Pro Tools users, it was possible to add shortcuts to commands that didn't have one by default using a third-party application like Quick Keys. Now, however, you don't have to, because there is a feature in the Mac OS X preferences that enables you to create some of them there. Here's how to do it.

First, quit Pro Tools if it's running. Now open the System Preferences window and then launch the Keyboard & Mouse preference pane. Select Keyboard Shortcuts and click the little '+' sign in the bottom left corner of the window. From the pull-down menu, choose Pro Tools from the 'other' item. (It won't come up in the main list, so you will need to navigate to the Pro Tools application in your Digidesign folder, which should be in the Applications folder on your hard drive.)

Now type in the exact menu option that you want to add a shortcut for. In this example, I wanted to have a shortcut for the Bounce to Disk command. I found it helpful to make a screenshot of the menu so I got the exact spelling and punctuation correct, as you must type it exactly how it appears in the drop-down menu. Make sure your upper and lower-case characters are right as well as any full stops. Now press the key combination you want to use (in this case

Alt+Command+B) and you will see it appear in the field. You should make sure that you are not using a shortcut already assigned from the standard menus, remembering the not-so-obvious ones too. 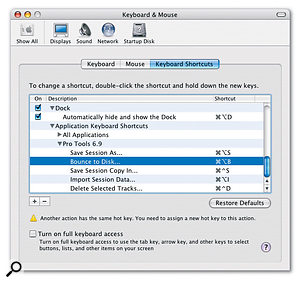 You can set up your own keyboard shortcuts for any non-Classic Mac OS X application in System Preferences. 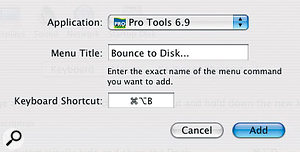 Quit System Preferences and launch Pro Tools again, and all being well, you should see your newly added shortcut in the menu. If a particular shortcut has already been allocated for that particular application, your new one won't 'take', and you won't see it appear in the menu against the appropriate item.

As you will see from the screenshots, I have already set up the following...

If you are thinking of trying this feature out, here are a few words of warning! If your chosen menu item has three full stops at the end, as is the case with 'Delete Selected Tracks...', then including the Alt key in the shortcut will bypass any warning message that comes up — in this case, for instance, where there are regions on the track you are trying to delete. This is a Mac OS X convention — for example, Alt+Empty Trash will empty the bin without asking if you are sure. This is why my Delete Tracks shortcut doesn't have Alt in it.

Some shortcuts also do other things. For example, my Delete Selected Tracks... shortcut will do a Region Duplicate if there is a region or regions highlighted — in this case, the system seems to ignore the Ctrl key and responds to Command+D!

There has been some confusion as whether you should use Journalling when formatting audio drives with Mac OS X and Disk Utility. Hopefully I can clear up this simply: Digidesign recommend the use of Journalling for Pro Tools versions from v6.9 and above, whether you are running Panther (10.3.x) or Tiger (10.4.x). However, if you are still running v6.7 or lower, you should leave Journalling off.