Making The Most Of EQ In Sonar v4 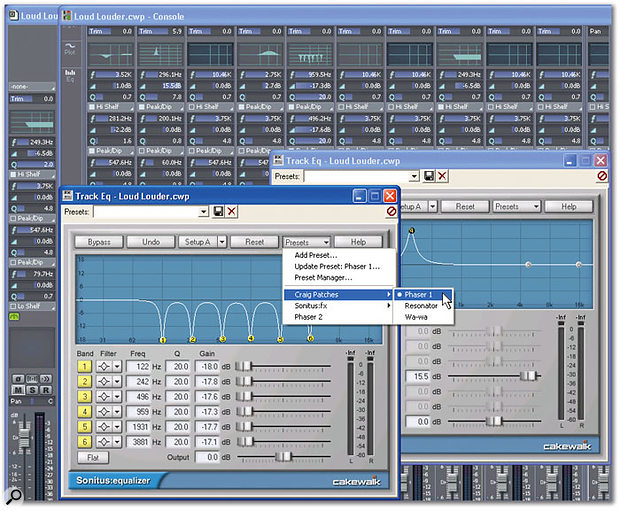 When is an EQ not just an EQ? When it's the Sonar 4 Producer Edition Sonitus EQ and you use it for some of the amazing processing tricks we're about to explain.

Although the Sonitus EQ bundled with Sonar 4 Producer Edition might not seem all that spectacular, it actually has a lot of hidden talents. For example, did you know it makes a great automatable phase shifter? Or models wah-wah pedals? Or that you're not limited to placing EQ pre- or post-effects, but can patch it both pre- and post-effects?

Sonar 4 Producer Edition includes per-track EQ that you can access via the Console View or Track View Inspector. With previous versions of Sonar, or Sonar Studio Edition, you need to insert EQ (or any other effects) manually in a track's FX bin by right-clicking on the bin, going to Audio Effects, then navigating to the desired plug-in. Even if you're using Sonar Producer, though, there can be advantages to inserting the EQ plug-in into the FX bin instead of using the per-track EQ... as we'll see in some of the tips that follow.

Even though you see only four stages of track EQ in the Inspector or Console View, the EQ is based on the Sonitus EQ and you can actually use all six stages by 'opening up' the per-track EQ to its full interface View. This also gives you the other advantages of the full interface: you can call up presets, use Undo, have separate settings for Setup A and Setup B, and so on.

It's possible to open up the full EQ View only if the EQ is actually enabled. To enable it you can either right-click on the plot and select 'Enable EQ', or click on the EQ module's power button toward the bottom of the EQ module. Now you can open up the View. In the Inspector or Console View, double-click on the EQ plot and you'll see the full equaliser. The other option is to right-click on the EQ plot and select 'Show EQ Properties'. Note that if you open up several EQs it appears that they replace each other in a single window, but they actually don't do that: each window stacks on top of the other, so you can separate these windows and view the individual EQs if you want to.

One possible problem is that if you make adjustments in band five and/or six of the EQ and then close the interface window, you won't see them in the per-track EQ display and you could forget about the adjustments you've made. However, with respect to track EQ, you can make sure that what you see is what you get by right-clicking on the EQ plot and choosing 'Reset Hidden EQ Parameters'. This turns off stages five and six. If this option is greyed out, it means that stages five and six are not enabled. 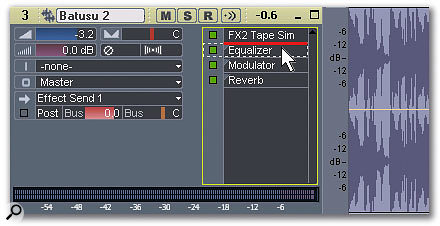 Insert EQ into the FX bin, click on it, and drag it into whatever position you want in relation to the other inserted effects.

EQ: Before Or After Effects?

There are two main ways of dealing with this issue. If you're a fan of the Console or Inspector View, right-click on the EQ plot and choose 'EQ Pre FX' or 'EQ Post FX' — simple. But you needn't be limited to just 'pre' or 'post' effects: you can place the EQ anywhere in a chain of effects, including the middle, so the EQ is both pre- and post-effects. However, you can't do this with the per-track EQ. Instead, insert your EQ in the track's FX bin, along with whatever other effects you want to use. Click on the EQ's label in the bin (dragging on the enable/disable button doesn't do anything) and drag it into the desired position in the chain (see the screen above). Note that the signal flow in the bin goes from top to bottom (or left to right, if you use horizontal rather than vertical FX bins). 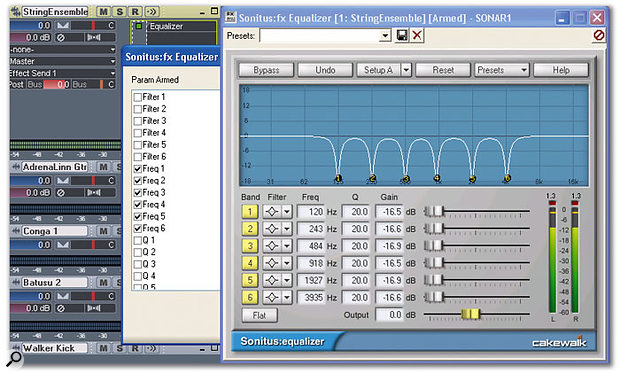 The equaliser has been set up for the type of frequency response produced by a phase shifter; the six filter markers have been linked together, then armed for automation in a separate window.

The Sonitus EQ is a natural for automated phase-shifting effects. After all, phase-shifting places several deep notches in the frequency spectrum and moves their frequencies up and down in unison. We can do this by linking all of the EQ's frequencies, then automating the response so that they all track together. However, you can't do this trick with the pre-track EQ; you'll need to insert an EQ into the track's FX bin and work with that.

Assuming you have Producer Edition, what about using the four effects sliders in the Console view to automate phasing? You can do this, but with the caveat that you'll only be able to shift four of the stages, not all six. You'll also need to specify that the filter markers retain their same frequency relationship (an octave apart) as they're moved. To set this up: 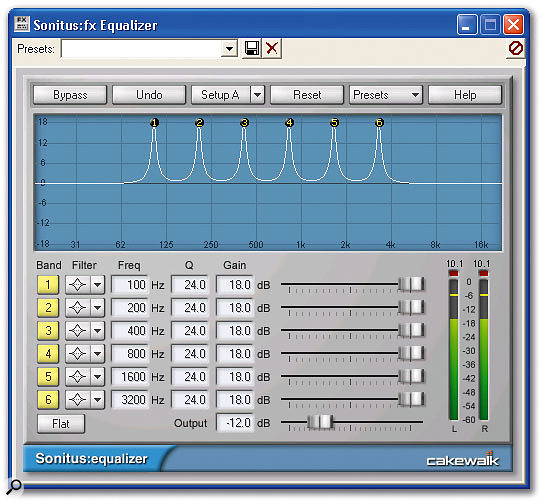 By adding lots of gain instead of taking it away, the phaser configuration can work as a resonator instead.

A variation on the above technique creates a resonator. This produces a series of harmonically-related peaks that impart a sense of pitch to the material being processed.

As you spent all that time typing in frequencies, why not save this as a preset? Go to the Presets drop-down menu, select 'Add Preset', specify the bank where you want it to live, and you can use the same curve again in other projects.

Before leaving the world of phasers and resonators, I should mention one other response that gives some very interesting sounds: a combination of the phase shifter and resonator settings ('phasenator', perhaps), where there are three peaks and three valleys. The tone resembles some of the vintage, stomp box-type phasers that used lots of regeneration. Because of the peaks, you'll need to pull back on the output level, albeit not as much as with the resonator. 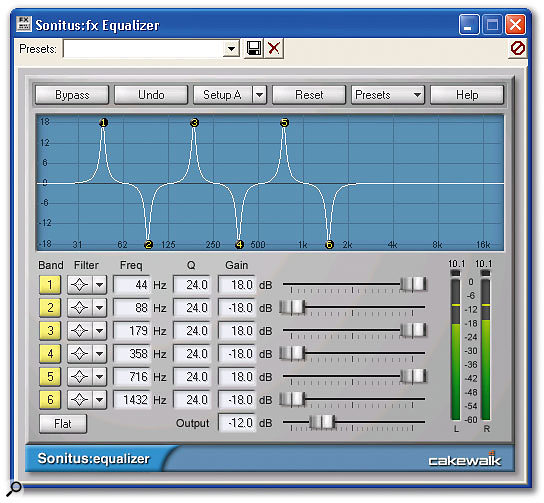 Yet another variation on the phase-shifter response produces yet another timbre-warping effect.

Here's a basic but highly useful feature: you can change the resolution of the EQ's graph in the interface. It defaults to an amplitude-axis range of ±20dB, but it's possible to right-click anywhere in the graph and choose ±40, ±10, or ±5dB as the range. The finer resolutions are very helpful with subtle settings; I usually use ±5dB, with occasional forays into ±10dB. By the way, if you change the graph's resolution in the per-track EQ, you won't see any resolution change in the channel-strip plot (frequency-response graph). Resolution changes are visible only in the full interface.

We covered this trick in a more basic way in an early Sonar Notes, but that was before the Sonitus effects and the option to tie parameters easily to MIDI control, so it's time to revisit the subject.

The idea of sweeping an equaliser's band-pass filter to create wah-wah effects is not new, but most people find the end result unsatisfying compared to using a vintage wah-wah pedal. This is because in an EQ, frequencies above and below the peak remain at their normal levels, whereas with a wah-wah pedal, response progressively drops off either side of the peak. Fortunately, there's an easy way to simulate that effect. 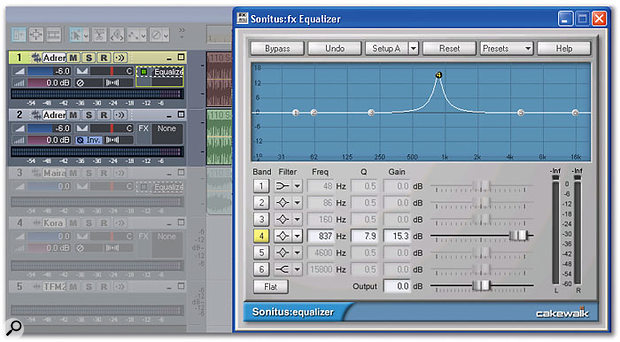 Wah-wah emulation: Track two has been cloned and flipped out of phase; the equaliser has been set up for a wah-wah type of response, and inserted in the FX bin for Track one.

But what's a wah-wah without a footpedal? We'll assume you have a synth in your studio somewhere that allows for footpedal control, so that when you move the footpedal, MIDI Continuous Controller #4 messages emanate from the synth's MIDI out. We can tie the two together with the real-time effects sliders that appear in the effects section (Sonar Producer only). However, there's a complication: you probably don't want the pedal to sweep the filter cutoff-frequency's full range, but only a portion of it. There's a way to do this, although it's a bit of a workaround. 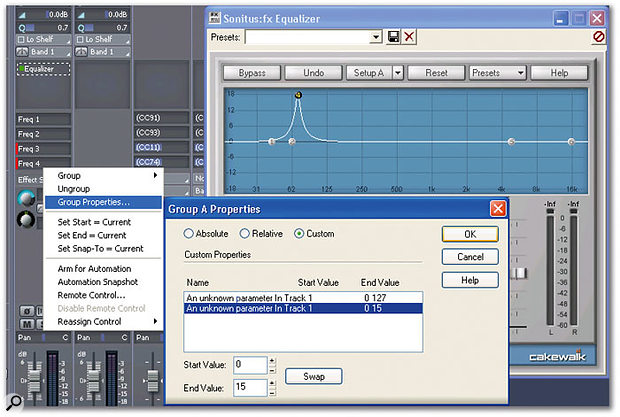 The Freq 3 and Freq 4 sliders have been grouped together. The Properties window allows Freq 3's slider to cover its full range, but here you can limit the Freq 4 slider response to cover a narrower range when the two are grouped and moved together.

Still Think It's Just An EQ?

If you really want to push the envelope, bear in mind that some of these techniques just beg to be used in stereo — in other words, clone a track, as with the wah-wah example, but don't invert its phase, and insert an EQ into each track. Set these both to do phase shifting, but have different rates and sweeps going on in the different channels...very psychedelic!

Setup B is currently selected but, via the drop-down menu, is about to be copied to Setup A as well.

It has always struck me as odd that so few plug-ins have a compare mode, which was common in hardware processors. However, the Sonitus effects have a very useful compare mode, accessed via the effect's toolbar. There are two independent parameter setups for each effect (three if you also count Bypass): Setup A and Setup B. You can toggle between them by clicking on the Setup A/B button.

A drop-down menu provides further functionality. Suppose you're comparing two curves, you have curve B selected, and you decide that you like B better than A — but you think you can still do better. On the drop-down menu, select Copy to A and the curve in Setup B will be duplicated in Setup A. Now you can keep tweaking B, safe in the knowledge that the original is safely stored in Setup B if you want to revert to it. Obviously, you can also copy the curve from Setup A into Setup B.

If you change your mind, Undo will work with this function, but (as always) it affects only the last operation. Also note that the Reset function, which flattens the gain at all frequency points, works independently for the two setups, so that you can reset one without disturbing the other.