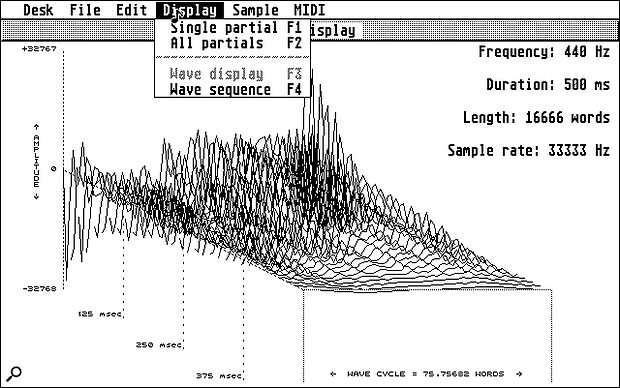 The MbooM commercial VST‑compatible Mac sequencer is creating a bit of a buzz at the moment, but did you know that it originated on the Atari and is now a free download for the platform? Derek Johnson finds out more...

I've recently expressed surprise that unfamiliar Atari software still manages to surface — despite the Atari's longevity and the fact that there's not much commercial development still going on — and this month it's happened again. Intuitive Music System, from Belgian developers MeepMeep, is a sequencer which has existed in some form since 1992. It's been ported to Windows and MacOS as MbooM, a downloadable commercial package, but the last Atari version is a fully‑working freebie. Obviously, there's no support, but Atari musicians are no strangers to this situation!

The Band's All Here

Essentially, IMS is a 128‑track combination of loop‑ and song‑based sequencer, with an unusual interface and approach to recording MIDI performances. Central to the software is the 'instrument' concept — similar to the idea used by MOTU's Freestyle Mac/PC sequencer? This basic unit can be given a name, MIDI channel, and output port (IMS recognises most MIDI Output expanders), plus other parameters. Select an Instrument, and make a recording with it; only now do you assign it to the software's version of a track. The program keeps tabs on these recordings, in a sort of 'pool', and you can assign them to other locations in other tracks — great for quickly knocking together a piece from short 'sequences' such as one‑bar drum parts and two‑bar bass lines. In fact, simply lengthening a sequence with the pencil tool causes it to repeat for the length of the stretch, with no separate copying operation required — very intuitive!

The performance can now be edited using List, Key, Grafix, Drum and Vintage editors. Grafix and Vintage are unusual options: the former displays data as vertical beams, while the latter displays events and their values as faders, emulating an analogue sequencer. Editing, and operation in general, is aided by many keyboard shortcuts and on‑screen soft buttons.

And there's more: comprehensive synchronisation options, a MIDI analyser, easy on‑the‑fly sequence playback for quick song creation, MIDI File compatibility, on‑line notepad, on‑line help, an elegant way of dealing with bank select commands, the on‑screen '2D controller' for combined level and pan control, and the tempo fader, to mention just some extra features. Reports are that IMS is compatible with any flavour of Atari (except TTs or systems running NVDI); it requires 1Mb of RAM, though, and a hi‑res monitor. The program is definitely worth exploring as an alternative to established MIDI sequencers, and once again the price is right!

The prolific David Snow's software has been mentioned a couple of times recently, and this month I have two more freeware examples of his work. Phraser is a simple program, with few controls, yet it outputs "instant pseudo‑12‑tone" compositions like nobody's business. Gareth Jones' Schoenberg (reviewed SOS September '97) offers something similar, focussing on 12‑tone serial techniques, but is more sophisticated. Snow's software works like this: load the program, enter a tempo (20‑240bpm) and beat‑subdivision value (8th notes, 16th notes, and so on), and start playing notes on an attached MIDI keyboard. This kicks Phraser into action, causing it to create random phrases based on the notes you play — kind of like a serial arpeggiator. Note density is controlled by playing velocity. If Phraser produces something you like, the performance can be saved as a MIDI File to import into another program for further manipulation.

Now to a quick summary of David's Falcon‑only New Wave, which allows you to create 16‑bit sound files using additive synthesis. There are three ways to create sounds in New Wave. With 'Single Partial Editing', the pitch and amplitude envelopes for up to 24 partials can be individually manipulated. A range of tools allows envelopes to be copied and swapped between partials, reversed, and so on. The final 'calculation' process involves setting the pitch, duration and sampling rate of the imminent sample, at which point work is auditionable. Finally, the sample can be dumped (via SDS) to a sampler or sample RAM‑equipped synth, or saved to disk (in Sound Designer format, despite the .WAV extender).

The second method, 'Timeslice Editing', lets you edit all partials of a sound at discrete points in time, rather than editing each partial individually. A sample is divided into 32 time segments, and you manipulate 24 volume sliders, each of which represents the amplitude of a partial at the selected point in time. When at least two slices have been edited, they're joined into a continuous envelope. A sample can be generated in the same way as with single partial editing. Finally, 'QuikWave' is the no‑brain option: the software does most of the work, in response to numbers entered into dialogue boxes.

Since I haven't yet tried New Wave myself, I can't offer my subjective opinion. But it's not as if I'm suggesting you spend loads of money to try the software out! The facilities seem comprehensive enough, and it has to be worth a look if you're into exploring sound at a fundamental level.

It's typical. You go to press with info on a long‑awaited software upgrade, and almost immediately another upgrade is announced. That's what happened last month: I passed on news of v1.33 of Neil Wakeling's excellent Pulsar 3‑channel analogue‑style sequencer, and the day after deadline I learned of v1.41. New functions include: Global Transpose, using the numeric keypad; Global Tempo change with the '+' and '‑' keys or mouse; Series Mute using F1/F2/F3; and Start/Stop with the space bar.