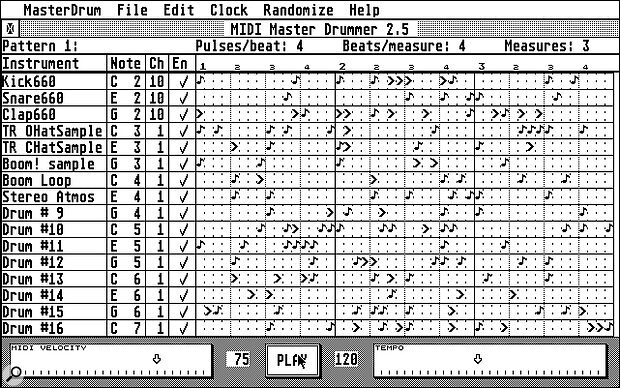 The grid‑like interface offered by MIDI Master Drummer is easy to get to grips with.

Derek Johnson gets into the groove with an 'emailware' rhythm‑creation program and goes analogue with an updated step‑sequencer...

Last month, I had a look at two pieces of nifty software from David Snow — his MIDI Square mouse‑orientated MIDI performance controller and Music Box four‑part algorithmic generator. Space ran out before I could examine his MIDI Master Drummer rhythm composition tool, so that's where we'll start this month.

Just like David's other software, MIDI Master Drummer, which originally had a commercial release in the early '90s, is now freeware, downloadable from www.egroups.com/files/ atari‑midi/. The software offers a graphic approach to rhythm creation, using a grid‑like interface not dissimilar to the drum editor in Steinberg's Cubase. Anyone familiar with F10 Software's more well‑known Robobop on the Atari will get the idea.

Three operating modes are provided. In Pattern mode, you create up to 96 individual patterns. Each Pattern has its own time signature and length, though a pattern can only have a maximum of 48 'pulses' or sub‑divisions per beat; that boils down to three bars of 4/4 with four (16th note) pulses per beat, for example. Sixteen drum instruments play in a Pattern; each can be named and configured to transmit its own note number on any MIDI channel, so sounds from different MIDI sound sources could be mixed and matched. Of course, the target 'instrument' doesn't even need to be a drum sound — it could be a sound effect, sampled loop or a single note on a synth. The user inserts notes, and velocities, at the desired points on each instrument's row on the grid.

In Phrase Mode, Patterns are linked into larger musical units: a list of Patterns can be typed into each Phrase's 'field' (16 Phrases are available). Velocity offset, tempo and Phrase repeat events can also be inserted into this list, which helps create a more complex Phrase. Phrases can be selected in real time, to create a performance, but for a more permanent result, move to Song Mode.

Song Mode is similar to Phrase Mode, except that you'll be chaining Phrases in one of a Song's 16 'Part' fields. A Song plays through each Part in turn to create the finished performance. Songs can also include velocity offset, tempo and Part repeat events.

Further neat features of MMD include a range of randomise functions for Patterns, Phrases and Songs, keyboard shortcuts, excellent on‑line help, tap tempo and MIDI sync options, and plenty of Pattern manipulation functions (including note‑shift and rhythm compression/expansion). Work can be saved as MIDI Files, for export to a full‑blown sequencer package. All in all, it's a flexible and fun program to use.

At the moment, there's no full documentation with MidiJoy, so operation is a bit 'hit and miss'. However, the program can be accessed with reasonable satisfaction via the tried and tested technique of pointing the mouse and prodding the ST keyboard. And with screens this busy, there's plenty to point and prod at.

Like Music Mouse, MidiJoy generates MIDI data in response to the mouse moving on an X‑Y axis. As you move the mouse, notes related to user‑definable scales are generated — the scales for both the X and Y axis can be changed in real time — and a host of other MIDI data (velocity, program changes, and control changes for example), again user‑definable, can also be generated. Scales can be transposed, note lengths changed, and a performance saved as a MIDI File. Nearly every key on the Atari keyboard is used to assist the performance and edit the many parameters, and the mouse's function can also be customised.

Note that MidiJoy won't run on a Falcon or TT (this is a shortcoming of the compiler used when the software was written at the end of the '80s), and that it's mono only; it also prefers operating with a screen accelerator such as Turbo ST (included with the software). MidiJoy is quite large for an ST application — after unzipping the downloaded archive, it's just over 820K. No problem for hard disk users, but obviously the program won't fit onto a 720K floppy. Solution? Separate the program and data files onto separate floppies during unzipping.

I'll return to MidiJoy when I've puzzled out some of its hidden functions — or when the manual turns up! But in the meantime, though I noted that MidiJoy is freeware, which is not strictly true. It's emailware: if you like the software and use it, email the author. Not much to ask, is it?

Mario Becroft's MIDI‑3 multiple MIDI Out port (reviewed in Atari Notes September 2000) is compatible with a variety of popular software, including Steinberg's Cubase and C‑Lab Notator. ASP, UK distributor for the MIDI‑3 (+44 (0)1235 534152), note that the unit is also compatible with Intelligent Music's RealTime, an unusual stab at sequencer design that was last reviewed in SOS back in August 1989! Not surprisingly, it's now available to download from www.egroups.com/files/atari‑midi/.

Preliminary news now of an update to Pulsar, Neil Wakeling's three‑channel, 16‑step analogue‑style sequencer (see Atari Notes April 1998), the original version of which had the excellent option of independent tempos for each sequencer row. A beta copy of v1.33 is downloadable from www.egroups.com/files/atari‑midi/ and so far, this fixes some bugs, adds a MIDI Clock output option and lets you copy notes from one row to another.