Reason 6's new mixer is living proof of its new 'grown-up' status: no restriction on the number of channels, flexible and great-sounding EQ, channel dynamics... Enough to make you salivate over your dongle. Yet there are some rather less conspicuous features that are just as exciting, and can really make a difference to how you work — and that's what we'll be looking at in this month's column. 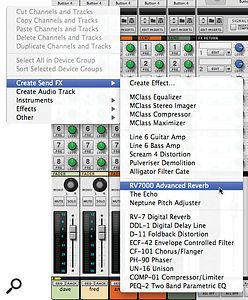 Having eight aux sends available, and all of them configurable as pre- or post-fader, is a real luxury. For general mixing, they're potentially great time and effort savers.

One common but very worthwhile technique is to connect just one reverb unit (for example) to the mixer, in a send/return loop, and then it can be 'shared' amongst any number of mixer channels. You just raise a channel's send level knob to divert a bit of its signal off into the effect device, and the effected signal comes back into your mix via an FX Return. The technique is massively more efficient and user friendly than applying many instances of the same effect to lots of individual devices or audio tracks. It's a bit of old-school studio engineering goodness that's still very valid.

2: With a send effect in place, you use it by enabling send buttons on individual channels (they light up in blue) and adjusting the level controls to determine how much effect is applied to each.

Setting up 'Send FX' like this is really straightforward. In the Mixer, right-click anywhere except on a knob, fader or button and choose 'Create Send FX' from the contextual menu that appears (screen 1). This then offers up the full complement of effect devices to choose from. The one you choose appears in the rack and gets automatically patched into the Master Section device. In the mixer, the device appears by name in the first free slot in the master section's FX Return area — make a quick note of which number that is. So, to now apply the effect to a mixer channel, you find the channel's Send section and click the send button with the same number to enable it. The accompanying level control determines just how much effect is added (screen 2).

For the most part, your sends should be set to post-fader mode when adding reverb, delay and the like. That's the default state of a send in Reason 6, and it ensures that the level being sent to 'external' effects devices scales automatically when you adjust the channel's main output fader. Also, the effect itself should have its wet/dry balance (if it has one) set to 100 percent wet.

Look After The Talent 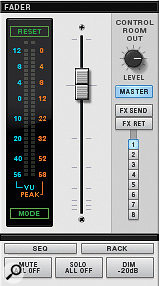 3: Reason 6's Control Room feature gives you a monitor controller knob, and lets you hear what's going out and coming into any of the effect sends and returns.

Another prime use for Reason 6's sends is setting up headphone mixes for musicians to use during tracking. And, thanks to another new mixer feature, that just got a whole lot easier to do.

Look at the master fader section of the mixer. Lurking in a nondescript grey panel is a 'Control Room Out' level knob, and some accompanying buttons (see screen 3). The Control Room section provides Reason 6 with a dedicated monitoring volume control, completely independent from the main output fader, and also lets you listen to effect sends and returns as well as the main master mix. This is an absolutely crucial feature in setting up good headphone mixes for your talent, allowing you to hear a headphone mix just as the artist will.

In a default new, empty song, the Control Room features don't do anything; they're effectively bypassed. But bringing them online, as it were, is really easy and well worth the effort.

Create or open a song, find the Master Section in the rack, flip the rack around, and (if it's not already like this) drag the cables that are connected to the Master Out sockets over to the CTRL Room Out sockets. Now, in the mixer, take a look at the buttons below the Control Room Out knob. They're 'source selectors', and determine what you'll hear through your speakers. Much of the time, you'll want Master selected, which simply lets you hear your main mix, but being able to select any of the eight effect sends and effect returns is a real plus. For example, if you want to check exactly what a send effect such as a reverb is contributing to your mix, just click the FX Ret[urn] button, and the number of the send/return loop your effect device is patched into, and you'll hear only that effect.

4: This is my Master Section setup for patching the Control Room outputs to my main monitors, and a headphone cue mix from FX Send 8 to an additional output pair.

But back to this headphone mix business. Let's say you need to provide a cue mix for a vocalist, and they want a completely different mix to the one you're building on your main faders. You're going to need an audio interface with an independently addressable headphone output, at least, or a multi-output interface with a pair of outputs driving a stand-alone headphone amp. You'll also have to set up Reason 6 to use multiple outputs (see the 'Multiple Outputs' box). Assuming that's all sorted, here are the steps you could take to build an independent headphone mix.

1. In the mixer, find an unused send, enable it on all channels and switch it to 'PRE' (pre-fade mode).

2. In the rack, at the rear of the Master Section, drag a pair of cables from the FX Send sockets that relate to the send you chose in the first step. Plug these into the pair of sockets in the Audio Output section of the Audio I/O device that correspond with your headphone output (screen 4). 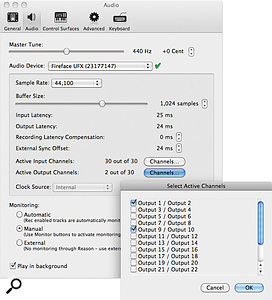 5: If you want to use multiple output channels in Reason 6, it'll let you do that, but you have to enable them first.

3. In the mixer again, switch your Control Room Out source from Master to the FX Send number you chose in step 1. This sends what your vocalist is going to hear through your main speakers.

4. Start to balance your channels in the headphone mix by adjusting the send-level knobs, not your main faders. You'll notice that there are no pan controls. This is just a cue mix, after all, but hey, at least it's in stereo!

5. When the mix is done, you can use the Master Section's FX Send section in the mixer (beneath the master bus compressor) to control the overall level if the headphone output or amp doesn't have separate volume control.

Just remember that when you finally come to track the vocalist, you'll need to make sure they can hear themselves too. How that works depends a little bit on how input monitoring is set up. If you're using the zero-latency features of your interface, remember to route the vocal input to the same headphone output, using the interface's controls or its software mixer application. But if you're using Reason 6's software monitoring, just remember to monitor-enable the track you're recording to and then raise its headphone pre-fade send level, just as you did for the backing tracks.

Reason has the ability to drive many separate audio outputs, but by default it's set up to use only two, for stereo monitoring. Adding more, to allow the setting up of independent headphone mixes, for example, is easy, though: it's done in the Preferences window. Go to the Audio page and click the Channels... button next to where Reason shows you how many Active Output Channels there currently are. What you see here varies according to the specifications of your audio hardware: screen 5 shows how it appears for the RME interface I use. In the pop-up dialogue box that appears, you can enable (or disable) additional output pairs. I've chosen an additional pair that relates to a headphone output on my interface. Once you've OK'd the dialogue box, and closed the Preferences window, you can then check out the Audio I/O device in the rack. You'll notice there's something a bit unintuitive about this: rather than enabling audio output sockets 9 and 10 (to correspond with my physical outputs 9 and 10), Reason just maps the physical output pair to the next available pair of sockets on the Audio I/O device. So I end up with my mixer control room output feeding sockets 1 and 2 (which relate to outputs 1 and 2 on my interface), and my headphone cue mix send connected to sockets 3 and 4, which represent outputs 9 and 10 on my interface. Potentially a bit confusing, but nothing a napkin and a biro couldn't sort out.