Find out how to make Sonar X2's Console Emulator plug-in work for you.

Sonar's X2 update included analogue console emulation at a fraction of the cost of third-party plug-ins. Console emulators may be controversial (after all, what's being emulated is imperfection), but if something makes a mix sound better, I don't care what it's emulating. On balance, I think Sonar X2's offering can provide desirable sonic qualities.

There are reasons why analogue consoles can sound different to mixing 'in the box', and also reasons why that may be a positive thing. Technically speaking, there are two main differences between analogue mixing and digital summing.

First, analogue circuitry has inherent non-linearities (or, in less polite terms, distortion). As a signal goes through multiple analogue stages, these non-linearities add up, although the end result can still be an extremely low level of them. The audible effects are most obvious at higher frequencies, as distortion creates harmonics in the audio spectrum's upper range, where instruments traditionally don't generate a lot of energy. With increased highs (which are more directional), this can create the feel of a wider 'sound stage' and also produce some of the 'sparkle' associated with processors like exciters.

Second, consoles often use audio transformers, and it's not an overstatement to say that transformers are some of the most complex signal processors ever introduced into a signal chain. What's more, the transformer's characteristics are dependent on the circuitry that surrounds it, such as the source impedance, capacitive loading, resistive loading, and the like. For example, the external circuitry may damp some of the ringing that occurs when square waves are passed through audio transformers. Transformers also generate distortion (primarily odd-order) that's highest at lower frequencies.

While the effect of all of these variables is subtle, many people like the sonic characteristics transformers can impart to a signal. I once visited Wendy Carlos when she had an Akai MG1212 digital tape recorder, and I couldn't get over how much better it sounded than other MG1212 machines I'd heard. The explanation? She had simply added transformers to the inputs and outputs, and that's when it hit me how important transformers could be to the sound. Overall, good transformer implementations provide a somewhat fatter low end, and can add warmth.

As with any processor, there are no rules if you want to get creative, so take the following as personal preferences, not as rules that must be followed.

Prior to mixing, I'd recommend inserting a Console Emulator Channel plug-in (CEC for short) last in the ProChannel for every track, and a Console Emulator Bus plug-in (CEB for short) in the master bus. The easiest way to do this is with the Quick Grouping commands covered in the December 2012 issue of SOS (/sos/dec12/articles/sonar-tech-1212.htm). In the Console view, open a ProChannel in a non-selected track. Then, while holding the Ctrl key, right-click within the ProChannel, select Insert Module, and choose Console Emulator Channel; this places the CEC last in every audio track. You'll need to insert the CEB in the master bus manually, as Quick Group only works across similar track types. 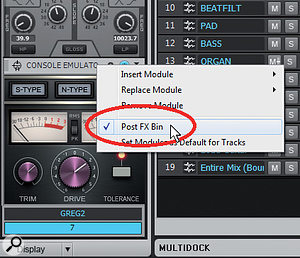 Then again, some Sonar users prefer putting the CEC or CEB first in the ProChannel chain, while others like adding one at both the beginning and end of the chain. Hey, whatever works for you — but I'd recommend starting with a 'plain vanilla' setup as you learn what the CEC and CEB do.

The Console Emulator Channel comes last in this chain, after the EQ and Concrete Limiter. Note the clip LEDs to the left of each module's bypass button; make sure these aren't lit up solid red, as that indicates distortion occurring within the ProChannel.

The main point is you want to mix while the console emulation plug-ins are active. How they affect a sound isn't something you can necessarily predict, so you'll want to make your EQ and dynamics decisions with the CECs and CEB in place. Also, remember that you can use Quick Grouping to bypass/enable all CECs simultaneously for comparison, as well as select the CEC type and control settings. Remember, though, that Quick Grouping using a CEC won't affect any CEB modules.

Start by choosing your emulation. To my ears, the S-type console is the most subtle, the N has the most character, and the A-type lies in between. As a very rough rule of thumb, I like N for rock, S for electronic (which already tends to have some 'sizzle', and benefits from the S type's 'rounder' sound) and A for primarily acoustic projects, to add a bit of a high-end lift, and where fatness isn't as essential.

These are very subjective opinions, but they can be borne out somewhat objectively. I generated sine waves at various frequencies and processed them through the emulations to find their essential characters, as well as how the controls affected the sound. It's well worth taking the time to run some tests of your own; Sound Forge, WaveLab and Audition can all generate high-quality sine waves, and you'll learn a lot when you hear how the console emulation controls affect the sound. Of course, you wouldn't judge a console emulation by how it processes sine waves, but you can get a handle on how it affects particular frequency ranges.

There are two main controls: Trim and Drive. The Drive control sets how much of the dry signal is affected by the emulation process, with higher levels producing more of an effect. Think of this as a character control. According to Cakewalk, Drive is designed to produce the most realistic emulation with settings between -6 and +2 dB; the additional range beyond those limits allows for more exaggerated effects.

Trim adjusts the input level going into the CEC so, for example, if you have Drive for two modules set similarly but one is dealing with a lower-level signal, you can turn up Trim to compensate. I tend to keep this at zero unless I need more input level, but if you want to really blow out the saturation, then turn it up. At that point, the CEC becomes more like an obvious saturator effect. (Note that the CEB doesn't have a trim control.)

Again, remember that you can Quick Group the CEC controls to adjust all instances of a parameter simultaneously.

For best results, pay close attention to gain staging within the ProChannel. There's a clip LED to the left of each module's enable/disable switch within the ProChannel — make sure no module's clip LED lights are solid red. Even a little bit of distortion can negate any Console Emulator benefits; you want carefully controlled non-linearities, not splattering digital distortion.

To hear a song that uses the Console Emulator on all channels, check out 'When the Grid Goes Down' on my YouTube channel at www.youtube.com/watch?v=eDYkMiE_cTQ. I also posted an excerpt with A/B comparisons at www.youtube.com/watch?v=pxEOk2DXV6I, both of which were discussed in the Sonar forums. Some people heard a definite difference with the A/B comparisons, while others didn't. But what was interesting to me was that sometimes the transition from processed to unprocessed is obvious, and sometimes it isn't. Overall, though, there's no doubt that when I bypass all the Console Emulation plug-ins, the sound becomes slightly less 'alive'. 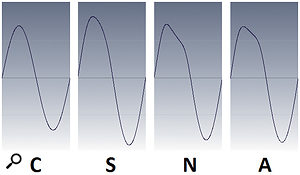 The non-processed, control sine wave is at the left. The waveforms for the S, N, and A types are to the right.

One thing that makes console emulation enigmatic is that it's not a broadband effect; it affects different frequencies differently, particularly with respect to transformer emulations and varying input levels. As a result, it's one of those 'mojo' effects that's difficult to explain.

When I first started using X2's console emulation, I wasn't all that impressed. But as I learned how to tame it, and how to mix through it, I started using it more and more. Sometimes the results are very subtle, but the end result is better than not using it. And that's what matters, right?