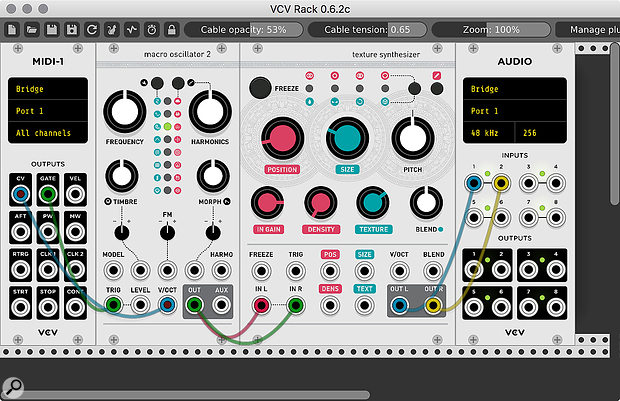 We show you how to connect audio, MIDI and CV between Reason and your virtual modular.

Since Reason gained support for VST plug-ins you may have experimented with using a virtual modular synth inside the Rack. So let's explore how to connect audio, MIDI and CV between Reason and these open-ended instruments.

There are a number of virtual instruments that present you with a modular synth environment. VCV Rack and Softube Modular are both direct Eurorack simulations with a mixture of their own core modules and ports of real–world hardware. Cherry Audio's Voltage Modular is also 'Euroracky' but with a focus on usability over simulation — in some ways it reminds me of Reason. Lastly, NI's Reaktor Blocks has just gained front-panel patching and suddenly feels much more like a real modular.

You might simply want to play a modular VI like a regular instrument — in other words get MIDI and/or clock from Reason into the synth, and get audio back out. You might also want to route audio from other Reason devices into the modular and use it as an effect. Or if you're feeling adventurous you can send CV and gates from the Rack into the modular (or vice versa) for sequencing or modulation.

Let's start with some basics. Softube Modular, Voltage Modular and Reaktor can all run as VST plug-ins, so getting started with them couldn't be much easier. All of them have presets that include the necessary MIDI, clock and audio connections for you to be able to play synth patches and synchronise any internal sequencing modules without manual configuration.

VCV Rack runs as a stand-alone app but has a companion Bridge plug-in that connects audio and MIDI to Reason. To use it you'll need to launch the Rack application and insert a Bridge plug-in in Reason. Your VCV Rack patch will then require a MIDI module to receive MIDI from Reason, and an Audio module to route audio back (or vice versa). Both modules have a display panel where you can select a device and port. Choose Bridge and Port 1 for both (see Screen 1).

All the plug-ins also have an 'FX' variant, for when you want to use them as insert or send effect devices. These are essentially the same plug-ins but appear in the Effects devices category and will be auto-cabled appropriately by Reason when added after another device in the Rack, or inserted into a Mixer channel. When used in this way the plug-ins will not be given a Sequencer track or their own mix channel. Remember, though, whichever way you initially create a device for your modular VST, you can change things later and add more audio and MIDI routing.

Reason's VST container has two audio inputs and outputs on its main rear panel, with a further six ins and 14 outs tucked away behind the Programmer Panel. These are great for bringing in multiple audio sources separately from your modular monstrosity, and (as we'll see shortly) for routing modulation between the two environments.

Each plug-in has a slightly different way of dealing with audio connections. Voltage Modular and Softube Modular both have built-in panels on their virtual cases where audio ports are housed. Connections made to these ports route to/from the patch points on the back of the Reason device. Softube Modular is somewhat limited on the input side: only the FX version of the plug-in has audio inputs available, and then only two. 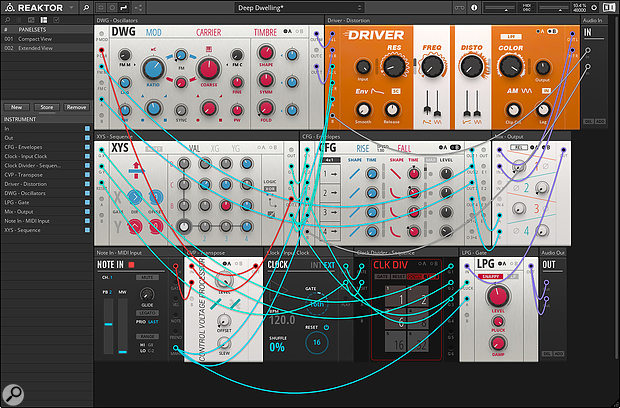 Screen 2: Reaktor has dedicated Audio In and Out modules. Here, two audio sources from the Reason Rack are patched to CV inputs on the Driver and CFG modules.

Reaktor and VCV Rack use dedicated modules in their racks for audio I/O. The default New Rack patch in Reaktor Blocks provides both In and Out audio modules. If you need to show the In block on a preset patch, switch to the Panelsets tab and enable In (you can see this in Screen 2). The Add and Del buttons on these modules let you change the number of ports.

VCV Rack's audio module provides eight inputs and eight outputs. You might, however, want to run more than one instance of the Bridge plug-in, so that each gets its own track in Reason. Both of these will talk to the same instance of the VCV Rack app, so you'll probably want to add another MIDI and Audio module and set them to a different port. There's a complication here, which is that there's no direct interface you can see in Reason to choose the port number! However, the port number is a parameter that Reason's automation system can see, so a workaround is to put the Bridge plug-in into a Combinator and assign a rotary control to the parameter.

The VST Device container in Reason lets your modular plug-in co-exist with other Rack devices. The main rear panel of the device provides CV and gate connections, inputs for pitch and mod–wheel modulation, and a pair of audio inputs and outputs. With the CV Programmer panel open you can reach eight 'modulation CV' inputs as well as the extra audio I/O.

There's an important distinction to note between the control connections in Reason's Rack and the CV, gate, trigger, clock, etc, inside a modular sim plug-in. The CV and gate connections on Reason's devices are essentially MIDI note events. These are prefect for triggering and sequencing the plug-ins with Reason devices like the Matrix sequencer, as I'm doing in Screen 3. The modular plug-ins all have internal MIDI-to-CV converter modules that translate these inputs into simulated voltage functions. 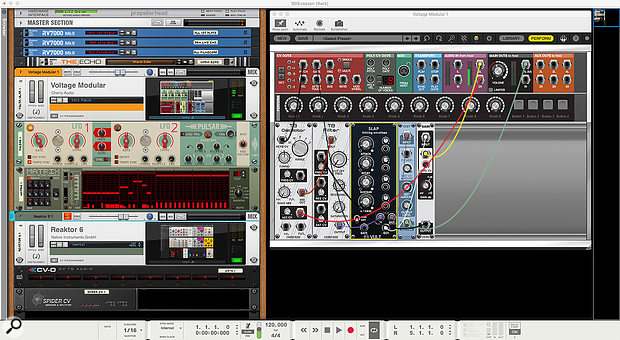 Screen 3: In this patch, Voltage Modular is being sequenced from a Matrix using regular Reason CV. Pulsar's LFO outputs are routed to Voltage Modular and modulating an oscillator mix (red cable) and envelope level (yellow cable).

Reason's modulation CV cables can be thought of as direct MIDI CC connections. Again they are not compatible with the simulations of control voltage used within VCV Rack, Voltage Modular, etc. You can however modulate parameters on VST plug-ins by mapping them to the eight CV inputs on the VST Rack module. Most plug-ins have a fixed set of controls, so mapping parameters that you want to reach via Reason CV is straightforward. On a flexible modular plug-in though the parameters change from one patch to another, and anyway wouldn't it be nice to directly connect to modules without having to go through this mapping layer? There is another way...

The family of modular synth plug-ins we're discussing have internal connections that work like a real modular, with no hard distinction made between control voltage/modulation and audio signals. In the Reason Rack audio and CV signals are different things; you can't connect a Rack device's audio output to a CV input or vice versa. (However, some Reason devices like Thor and Complex‑1 do treat audio and CV as equivalent within themselves).

Reason's Thor device can be drafted in as a handy CV/Audio converter and scaler.If you want to truly interconnect modules from Reason's Rack with those in your software modular, you need to be able to convert Reason's CV into audio signals and vice versa. There a several ways to do this...

Reason's Pulsar device is unusual in that it provides both audio and CV outputs from its dual LFOs. These can be directly connected to the audio inputs of a modular VST and connected to CV inputs of the modules therein. I'm doing exactly that in Screens 3 and 4. 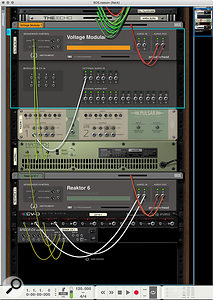 Screen 4: The rear of the rack reveals CV from the Matrix being converted to audio by Robotic Bean's CV-O, then routed into Reaktor Blocks.Another standard Reason device, Thor, has a modular–style routing matrix that can act as a CV–to–audio and audio–to–CV converter. (It's also a great source of modulation and sequencing in its own right.) Use the matrix on Thor's extended panel to route CV inputs to audio outputs or vice versa. The Amount parameter will change the depth/gain of the output (negative amounts produce an inverted output) and you can even scale the modulation from another input source.

If you find this kind of patching fun and inspiring you should consider investing £23$23 in Robotic Bean's CV-I/O Bundle. This is a pair of Rack Extensions (CV-I and CV-O) that provide eight channels of audio–to–CV and CV–to–audio, respectively. These are the quickest and cleanest way to freely translate between Reason CV and modular voltages, and will also work with a DC-coupled audio interface for connections to hardware.

In the lower half of Screen 4 I'm using the CV-O device to take CV modulation from a Matrix sequencer and send it into Reaktor, where it's being used to modulate a filter and function generator in Screen 2.

Next time we'll take another step and explore how to connect melodic note and sequence data between Reason and your modulars.