Reason's flexible routing is at the heart of this month's exploration of synth modulation. 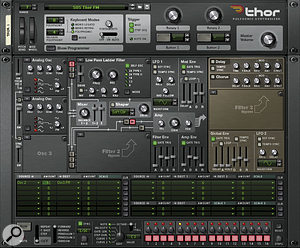 The fundamental signal path here could hardly be simpler — just an 'analogue' oscillator passing through a Low-pass Ladder filter. But the modulation matrix is being used to modulate the frequency of Osc 1 with Osc 2, at an audio rate. Normally the province of esoteric hardware modular synths, the effects you can achieve range from mild coloration to total harmonic insanity.

Reason and Record offer astonishing flexibility when it comes to modulation. At the simplest level you've got the envelopes, LFOs and other modulation sources built into the synths and samplers; and for more ambitious users, there are the rear‑panel CV (control voltage) inputs and outputs, which allow you to apply one device's modulation sources to another at the mere drag of a virtual cable. But what if you want to take synthesis and sound design further — to explore the outer limits of modulation, as it were? What other options are there?

Answer: try using audio as a modulation source. 'What?', I hear you cry, over your banging beats, 'Surely that's impossible?' Well, for the most part yes. Reason and Record won't allow you to plug an audio cable into a CV socket, and vice versa. However, so‑called 'audio rate' modulation possibilities are built into the very heart of the über‑synth, Thor, and you access them via its modulation matrix.

Particular oscillator‑type combinations and settings can generate unexpectedly interesting tones, as in this Multi/Analog Osc pairing.

FM (frequency modulation) is the technology used in radio broadcast, of course, and in Yamaha's seminal DX series of synths from the 1980s. The idea is that one oscillator you don't hear (the modulator) repeatedly 'bends' the pitch of another that you do (the carrier). Since this pitch modulation occurs at an audio rate (which is considered to be at least 20Hz, and frequently much faster) it ends up with the carrier's waveform being altered, and taking on different harmonic characteristics. Certainly we don't hear the effect as any sort of frenetic vibrato!

To get started with audio-rate synthesis in Thor, let's set up a simple patch. Assuming you've already created a mixer (or you're using Record), start by creating a Thor, click the Show Programmer button, and right‑click to Initialise Patch. This leaves you with a single Analog Osc routed through a Low‑pass Ladder filter. Try the following:

1. In the empty Osc 2 slot, create another Analog Osc and switch it to sine wave. You won't hear it, by the way, as by default it isn't routed into the audio signal path.

2. Down in the first slot of the modulation matrix, set the source to Osc 2 (that's the audio output, remember), and the dest(ination) to Osc 1 > Frequency (FM).

3. Now, as you play, click and drag in the amount field, to add the effect.

The effects you can achieve like this depend greatly on the modulation-matrix amount value, as well as on the pitch settings of both oscillators, and range from mild thickening to glassy, bell‑like digital textures. Interesting it may be, but in reality the DX‑like tones that emerge are unlikely to feature in your next trance production. So how can you broaden the scope of this technique?

Using the matrix's scale option lets you vary the quality and intensity of audio‑rate modulation over time, using another modulation source.

First of all, try different waveforms in the Analog Oscillators you're already using. The more high-frequency content present in the modulator oscillator (Osc 2), the more grungy the outcome, generally speaking. So you'll get more dirt using a sawtooth wave than a sine.

Next, try switching oscillator types, both for Osc 1 and Osc 2. Any type can modulate any other (with the exception of the Multi Osc, which can modulate, but can't be modulated). It's all entertainingly unpredictable, but certain combinations seem especially fruitful. Try, for example, modulating one Wavetable oscillator with another. Stepping through the position setting for each of the many wavetables on offer provides a huge range of harmonic variation. Using the Multi Osc as a modulator gives especially complex results. For example, the settings shown in the screen shot below yield a very complex tone with formant‑filter‑like overtones in certain pitch ranges.

The scale option in the mod matrix also yields interesting results. In the same row where you made the main FM assignment, try choosing the Mod Env(elope) or an LFO in the scale column, and drag to apply an amount. Either way, this will cause the FM effect to vary over time, and of course you can then tweak the envelope or LFO settings too.

If you like using sample‑and‑hold LFOs to provide some movement in your synth sounds, wait until you try audio-rate modulation from an external source — here being provided by a vinyl scratch loop from the Dr OctoRex device.

For even weirder, but often brilliant sounds, try using an audio source outside of Thor as the modulator. You could go with a sequenced pattern from another Thor, or a drum pattern from a Redrum or Dr OctoRex, as in this example:

1. Create a Dr OctoRex and load up a typical drum or accompaniment pattern — it'll be just a starting point for now and you might want to go back and experiment with it further in a minute.

2. Around the back of the rack, unplug the Dr OctoRex from its default connection to your mixer and take one of its outputs instead into Thor's Audio Input 1.

Now, while playing your Thor patch, click the Run button on Dr OctoRex and get ready to adjust the modulation Amount to control the effect. You'll hear it particularly if you adjust Amp Env settings so that the basic Thor sound is a sustaining pad or polysynth‑type sound. I found several of the .rx2 files (found in the Reason Factory Sound Bank > Dr Rex Instrument Loops > Scratch Loops folder) particularly good for inducing strange but controllable oscillator instability.

Even more unusual than Oscillator FM is what could be termed Filter FM. Rather than apply an audio‑rate 'wobble' to the pitch of the oscillator, this is all about applying it to the filter frequency (cutoff) parameter. Consequently it can be applied to all filter types (in all three filter slots) except the Formant Filter.

The setup can work in just the same way as before. Sticking with our very simple signal flow for now, with Osc 2 used as an audio‑rate modulation source, you can modify the modulation matrix assignment so that Osc 2 is still in the Source column, but Filter 1 > Filter Frequency (FM) is now the Dest(ination). This gives you a whole different range of harmonic distortions to play with, many of which aren't so metallic and digital sounding as oscillator FM. But since Filter FM often adds a lot of high‑frequency content you might want to load up Filter 3 with a Low‑pass Ladder or State Variable LP12 filter to tame the effect.

The more you experiment with audio-rate modulation, the more possibilities seem to emerge. For example, I've only described using an Oscillator or an external signal as a modulation source. But in the mod matrix Source pop‑up menu you can choose the signal present at many other points in the audio chain instead, including the output of Filters 1 and 2, and the Shaper. And why not push the limits with other modulation destinations too? I've only described FM and Filter FM, but how about routing an Oscillator to modulate another Wavetable oscillator's position parameter or the Shaper's Drive parameter. As with many forms of audio-rate modulation, the results are often unpredictable, but you can create sounds that are not easy to achieve by any normal means.

Thor's modulation matrix does indeed let you set up amplitude modulation effects by routing an Oscillator (for example) to the Amp > Gain parameter. But more often than not, it's quicker and easier to use Thor's 'hard‑wired' AM, controlled by the little vertical slider to the left of Osc 1. When you drag this up, you begin to modulate the amplitude of Osc 1 with Osc 2, at an audio rate, of course. For really clangorous tones, turn down (or off) Osc 2's keyboard tracking, using its KBD knob.That causes Osc 2 to produce a fixed-pitch tone while Osc 1 still tracks the keyboard.