The ProChannel's two compressor choices are modelled after a UREI 1176 and an SSL 4000G, and the reason for the two types is that they're intended for different applications. The '76', which is the default compressor for individual tracks, has the potential for more drastic compression. When you want to set the compression so high that it pops, or gives a 'pumping' drum sound, this is the one to use (although, of course, you can also employ more subtle settings). It does not support side‑chaining.

The '4K' is often referred to as a bus compressor, which makes sense, because it's less about dramatic compression effects, and more about gluing complex program material together. As a result, this type of compressor is often strapped across the stereo bus to give program material more punch, or used on individual tracks with complex material (for example, full mixed loops). It's the default compressor when you select a bus in Sonar X1, and it does support side‑chaining.

However, there's an important caution. If you intend to send a project to a mastering engineer, don't insert anything in the master bus, particularly a compressor. This restricts dynamics in a way that's almost impossible to undo, whereas if you don't add compression, it can always be added during the mastering process (and almost certainly will be).

Parallel compression is a technique that, traditionally, splits a track to an effects bus that includes a compressor, which is mixed back in with the track's unprocessed sound. This is most often used with bass and drums so that the dry signal can provide dynamics and transients, while the compressed signal can bring up softer sounds and add more punch or sustain. Many engineers use parallel compression to give a full, big drum sound, but without destroying dynamics.

Both the 76 compressor (shown) and the 4K compressor include a wet/dry control, which allows you to create parallel compression effects.

The 76 doesn't have a traditional Threshold control, electing instead to include an Input control that lets you increase the level going into the compressor. Turning this up 'slams' the input more, thus increasing compression (the Output control provides make‑up gain). Also, instead of having a continuously variable ratio control, you have a choice of 4:1, 8:1, 12:1, 20:1 and infinity. If you want lower ratios — which I often use to give just a little lift to tracks — you'll need to use the Sonitus compressor or the compressors in the VC64 vintage channel. (Note that, thanks to dual compressors and variable routing, the VC64 also allows for parallel compression; however, these can be two different compressors with different settings, not just a compressor and a dry path.)

The 76 can also serve as more of a level maximiser than a compressor, which I find particularly well suited to drums. Here's how to set up the 76 to give drums more punch:

Similar settings form the basis of the 'ultra‑pumping' compressor sound that was popular in the '60s and still is in some of today's dance music, where extreme compression causes the snare and other loud drums to modulate the cymbals. Follow the steps given previously, but in step one, choose a ratio of 20 (or less, if you prefer less sonic destruction). Then, in step four, turn the input up past 3dB or so.

Switching over to the 4K opens up a different world, as you can tell by the change in colour scheme and knob cosmetics (see screenshot, right). With the 76, the meter goes negative to indicate gain reduction; with the 4K, positive values indicate the amount of gain reduction. And while the 4K is billed as a bus compressor, it can give a sweet, gentle compression effect that leaves you wondering whether you really have the compression enabled or not, until you disable it, whereupon the contribution the 4K makes becomes obvious.

The controls are the same as for standard compressors: Threshold, Attack, Release, Make‑up Gain and Ratio. However, Ratio options are limited to two, four and 10, with 10 giving more of a peak limiter effect.

As to side‑chaining, the 4K's detector input can appear as a destination for any track, bus or send output, but the 4K won't respond to any signal being sent to it unless its 'S. Chain' switch is enabled. Note that there's also a high‑pass control that's variable from 0kHz to 2 kHz going into the detector, which is ideal for preventing subsonic frequencies or kick drums from influencing the compression effect. 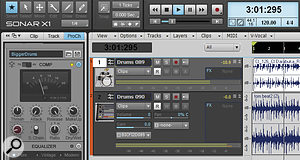 Track one's Inspector is shown here, and track two's output is being sent to the 4K compressor's side‑chain input (note that the 'S. Chain' switch is enabled). The 4K's high‑pass filter is cutting out low‑frequency drum sounds.

Another consideration when side‑chaining is that it's helpful to 'lock' the ProChannel view to the 4K being controlled. Otherwise, when you click on the channel sending the side‑chain signal to adjust (for example) the output level, the ProChannel view will switch over to the newly selected channel, and not show the one with the 4K you're controlling.

Normally, the Inspector shows the ProChannel (here the 4K compressor is chosen) for the currently selected track. However, you can lock the Inspector to the track of your choice via the pop-up menu.

Saturation is one of those processors that I thought was going to be more or less worthless, but I've become quite fond of it. The most important aspect is choosing the right distortion type for the job: Type I for a more conventional distortion sound that distorts all frequencies and warms sounds that don't have a lot of highs, or Type II when you want the highs to remain more or less intact, and tip saturation toward the lower frequencies. Note that Saturation does not substitute for amp simulation or fuzz effects; Sonar includes Guitar Rig 4 LE for that. Saturation is more about 'vintage' or tube-style warming, and adding character to the sound. 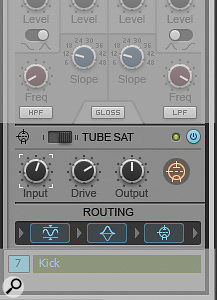 ProChannel's Saturation section is simple, but effective. Note the 'glowing tube' indicator toward the right; the brighter it glows, the greater the degree of saturation.

There are really only two strategically important controls. Drive determines the degree of distortion, but this also interacts to some degree with the Input control, as more input signal subjects more of the signal to distortion. The Output control simply compensates for any gain differences created by saturation.

One last point: note the routing section toward the bottom of ProChannel; you can rearrange the order of compression, saturation and EQ by dragging their respective icons into the desired position.