Multi-band processing in Sonar needn't stop at compression: using the same approach on distortion is easy and effective.

Multi‑band compression has been with us for a while, but the concept can be taken much further and applied to other types of processing. I first discovered the joys of 'non‑compression' multi‑band processing with the Quadrafuzz, a distortion box I designed many years ago that split the guitar into four non‑overlapping frequency bands and distorted each band individually. Reducing intermodulation distortion caused by the highs and lows being distorted through the same processor, this resulted in greater clarity and a fuller sound: for example, power chords had a lot more focus. When translating this concept to the studio, there were additional possibilities (for example, panning the bands to create a stereo image, or doing additional processing, such as multi‑band chorusing).

There are commercially available ways to split signals by frequency, from the crossover module in Native Instruments' Guitar Rig to programs like iZotope's Trash. But the ideal solution is a method that can be applied to any signal, and this requires an accurate multi‑band crossover. Fortunately, Sonar has just such a module, but it's 'hidden in plain sight'.

Sonar includes two multi‑band compressors: the LP64 linear phase multi‑band, and the venerable Sonitus Multiband compressor. The latter is ideally suited for our purposes because it's very CPU friendly, so we can stack up instances over multiple bands, even with relatively modest computers. However, the LP64 will also work, so you can give that a try too. In either case, we'll be using the processor's filters to create a series of frequency crossovers.

There are two basic strategies to implementing multi‑band processing:

I prefer the first option, as the tracks and effects are readily visible in the track view, and you can create a track folder there and collapse the tracks down to a single slot. It's also easy to group track parameters together, which is convenient for making 'universal' adjustments to all tracks. However, if you want to apply multi‑band processing to different instruments — for example, three layered rhythm guitar tracks — then bussing uses up less CPU power, and sending each instrument to the same bus guarantees that you'll be applying the same effect to the various instruments.

Set up one track the way you want it, so that cloning it will create the additional tracks exactly as desired. For example, suppose you're using the version of Guitar Rig 4 LE bundled with Sonar X1 Producer as your amp sim. Insert the Sonitus Multiband Compressor, followed by GR4 LE, in your original rhythm guitar track.

For the Sonitus Multiband, click on the Reset button. This results in no compression being applied, which is what we want. Then, go to the Common tab, and turn off the Limiter (unless you want to use the Sonitus Multiband as a maximiser for a particular track — we'll look at this later). 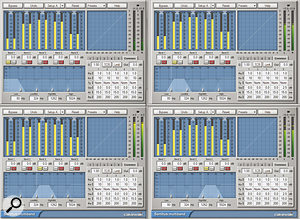 Here we can see the Sonitus Multiband compressor settings for our four cloned guitar tracks.

Now tweak GR4 LE for the kind of distortion sound you want: for example, drag in the Jump amplifier component and call up the Distorted preset (with this preset, I usually turn down the amp treble control a bit). Spend some time getting an amp sound that satisfies you, because once you've cloned multiple tracks, it's inconvenient to have to go back and tweak each instance individually.

Before cloning the tracks, get a feel for how the Sonitus Multiband affects the guitar. Note that each band has a solo button, and that these are additive, so you can solo more than one band at a time. While monitoring the track, solo each band in turn, and listen. I found that the top band didn't really do much for the sound; in fact, it seemed somewhat harsh. So I decided I didn't really need five bands of distortion, because four would do the job.

Also listen to band pairs. For example, soloing the two lowest bands gives a chunky, fat sound, while soloing the middle and upper middle bands gives more definition and mid‑range prominence. Based on this, you might decide that you really only need two tracks of distortion (one for each band pair). However, let's assume you want to go ahead with four discrete tracks, with four bands.

Right‑click on the track number in the track header, then select Clone Track. A dialogue box opens in which you can specify the number of cloned tracks. Specify three cloned tracks, starting with the next higher track number compared to your 'base' track, so they'll be grouped together as consecutive tracks.

After you've cloned the tracks, it's time to edit the Multiband processors.

The screenshot at the top of the page shows all four. Each one has one band soloed; note that the dynamics graph in the upper right indicates that no compression is going on. As you can see from the output meters towards the right, the lowest band has the least output, and the mid‑range band (lower left window) has the highest output. This gives a natural sound, and while you can adjust the output to even out any variations, you probably won't want to.

To get the big picture, check out the screenshot of the track view below. The four cloned, consecutive guitar tracks place the lowest band in track one and the highest band in track four. Note the pan controls: the lowest frequency band, which is very bassy, is panned towards the centre (sometimes when listening to these tracks, it almost sounds like a bass is playing along with the guitar). The low‑mid is panned toward the left, the mid‑range (the loudest of the three bands) is panned slightly to the right, to keep the image mostly in the centre, and the highest band is panned far right to increase the left‑right spread from low to high frequencies.

The cloned tracks and effects should appear in the track view, as shown here.

This workshop has explained the basic techniques, but there are many opportunities for taking the concept further. In addition to panning and adding more processing, here are some additional tricks you might like to try:

Multi‑band processing sounds great with signals that are rich in harmonics. But experiment: you might be surprised by the many ways in which this technique can augment your sound.