If Logic's built-in pitch-correction doesn't cut it for you, try this trick...

The original EXS24 playback‑only sampler plug‑in was introduced at the start of the new millennium, but was quickly updated to MkII status a couple of years later. It has doggedly remained on that same version number, despite Logic Pro itself having changed almost out of all recognition over the years. It's proved itself to be a fine 'traditional' sample‑playback instrument, albeit with some limitations compared to its third‑party competitors, but it gets the job done for most of the sampling tasks you might want to perform. While there have been few changes under the hood to EXS24 II itself, Logic Pro has had a few updates that work in tandem with the sampler to overcome some of its limitations.

While Logic Pro has a pitch‑correction plug‑in, I don't think Antares or Celemony are going to lose any sleep over its usability and audio quality. The main problem with the Pitch Corrector is that it has no manual mode, which means that there's no way of affecting individual parts of an audio region while leaving others at their default pitch, unless you want to embark on a round of cutting, pasting and track creation. But Logic Pro's 'Convert to New Sampler Track' feature, which is brilliant for generating ReCycle‑like sample instruments, by slicing up audio and assigning these slices to MIDI note numbers, can also, at a pinch, be pressed into service as a fine‑tuning pitch‑correction tool. Say you have a vocal line that is almost perfect in feel, but has a couple of notes that are slightly out of tune: obviously, the best way to correct this would be to get the vocalist to redo the line, but this isn't always a practical proposition, as the widespread use of software like Auto‑Tune for this very purpose demonstrates. Logic Pro's Pitch Correction plug‑in can be used to correct the out-of‑tune notes, but can also add unwanted artifacts to the rest of the take.

So what to do? Cutting out the notes, using the Bounce to Disk feature to create new independent regions and subjecting them to Logic Pro's archaic Time Machine in the sample editor is one way to attack the problem, but it's a destructive process, and the audible results aren't exactly pristine. Using EXS24 II and the 'Convert to New Sampler Track' feature can address these problems in a much more elegant way, and also open up opportunities for experimentation.

First, double‑click on the vocal region to open the sample editor, and switch on the Transient Editing Mode display from the View menu or the icon on the editor's toolbar. 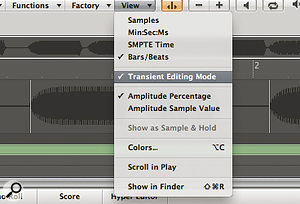 To access Transient Editing Mode in the Sample editor, double‑click on the relevant vocal region and select 'Transient Editing Mode' from the View menu.You'll see that Logic Pro's transient detection facility (which is the same as the one found in the Flex editor) has helpfully placed transient markers at the places it thinks are transient peaks in the audio. The plus and minus icons to the right of the transient mode icon increase or reduce the number of transients automatically detected by Logic. With percussion, these can be uncannily accurate, but with audio, such as vocals, you'll have to do some manual editing to get them in the places you need. You can move these markers by dragging them, delete them by double‑clicking on them, or generate new ones by Command‑clicking on the waveform. The idea is to get transient markers to line up accurately at the start of each phrase in your vocal take. Once you've done this, right‑click on the vocal region on the Arrange page and select Convert to New Sampler Track, which opens up the window you need. 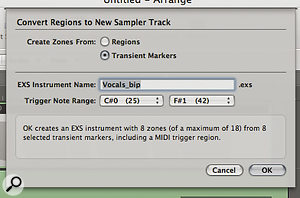 When using the 'Convert Regions to New Sampler Track' function, be sure to select the 'Create Zones From Transient Markers' button. This creates a separate EXS24 II zone for each note or phrase that you've marked out.As you want to create separate EXS24 II zones for each vocal note or phrase you've delineated with transient markers, you need to select the 'Create Zones from Transient Markers' radio button. Logic Pro then displays how many EXS zones will be created. You can also rename the EXS24 II instrument here, and it will be automatically saved in the Project folder. If you want the samples to be copied to the folder as well, make sure that the 'Copy EXS Samples to Project Folder' parameter is set from the Assets window in the Project Settings, itself selected from the main File menu.

Clicking on OK will generate a new EXS24 track pre-loaded with the new sampler instrument. A MIDI region will also appear, containing notes for each of the zones created. The audio at each transient marker has effectively been converted into an EXS zone assigned to a MIDI note (see screen shot above). The original vocal region is muted, so playing back the new MIDI region should sound exactly like the original audio region, but it's actually now being replayed by EXS24 samples via MIDI note data.

Here you can see that MIDI data has been correctly created from the original vocal region.Double‑clicking on the EXS24 II plug‑in and selecting the edit button will open up the Instrument editor window (below). Here you'll see that the separate samples created from the transient points in the original vocal region have been assigned to individual zones, along with a keyboard displaying the MIDI notes that play back these samples. You can use the EXS24 II editor to change each sample's pitch without affecting its neighbour and, if you're so minded, their respective levels, even if they are replayed forwards or backwards. Having the vocal region split up like this could also help to generate some creative inspiration, if poetic structuralism is your thing, as you can play back the vocal notes and phrases you define by transient markers in any order from a MIDI keyboard. 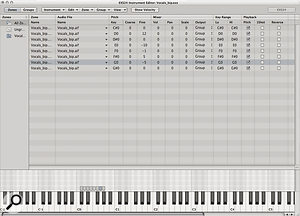 If you want to take your vocal pitch‑editing into the realm of gender changing, you'll need to be able to modify the formant, as formant resonances are a major part of what gives each gender its vocal distinctiveness. The EVOC 20 Filterbank effects plug‑in contains a subset of the EVOC Vocoder controls and features many useful vocal-processing tools. The Formant shift knob will create a more feminine voice if you turn it to the right and a more masculine voice if you turn it to the left. Of course, you can also use the Filterbank to further warp your vocals with its LFOs and multi‑bank filter.

The EVOC 20 Filterbank has a Formant Shift control that can effectively change how masculine or feminine your vocal sounds.

The world of experimental music is awash with granular synthesizers, and you'll also have heard them used in more 'conventional' music as they slice up and glitch drums and other instruments. In essence, granular synthesizers split audio into small chunks or grains that can then be rearranged on playback. If you create a lot of transients in an audio region, you can use Convert to New Sampler Track to generate dozens of EXS24 II zones. If you create one for each MIDI note on your controller, for example, you can use these notes as the 'seeds' for a granular synthesizer. The samples can be played back in any order, and with great accuracy, from a MIDI keyboard or region, or you could use the arpeggiator to generate random sequences of notes based on the keys you hold down.

If randomness is really your thing, the easiest way to create random MIDI data is by using some kind of generative MIDI sequencer, such as the free Elysium (www.apple.com/downloads/macosx/audio/elysium.html), which can port its MIDI output directly into Logic Pro.