Intel's multi-core processors seem to be proving incredibly popular with the PC-based musician, but a few people still seem to be wondering whether they really will notice a significant benefit if they upgrade from an older machine. I could, of course, remind you once again that I'm still extremely pleased with the performance of my E6600 2.4GHz Conroe dual-core model, which has proved to be more than three times as fast as my previous Pentium 4 2.8GHz computer. However, perhaps a more convincing alternative might be to enter the clock speed and type of your proposed replacement CPU into the on-line CPU Speed Converter at http://ocn.wadeluxuries.com/cpuv3. It currently supports comparisons between Core 2 Duo, Pentium D, Pentium 4 Extreme Edition, Pentium 4, Celeron, Athlon X2, Athlon FX, Athlon, Sempron and Opteron processor ranges. 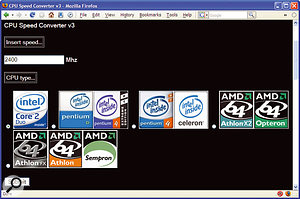 Want to know how much faster other processors are likely to be, compared to yours? Try this on-line CPU Speed Converter.At the time of writing, this utility hasn't yet been updated to include Intel's latest Core 2 Quad processor, which is already becoming the range of choice for musicians requiring even more CPU power than that provided by dual-core models. When the Core 2 Quad Q6600 2.4GHz model was first released by Intel, in January 2007, it was nearly three times the price of the Core 2 Duo 2.4GHz model, despite essentially being two such processors mounted side by side in a single package. However, the Q6600 price has already dropped to less than twice that of the E6600 (£235 compared with £140, making it little more expensive for a new PC than the £210 I paid for the E6600 back in November last year). Since Intel are going to be making further price cuts on July 22nd, by the time you read this in mid-August the Q6600 will be even more competitive.

Many existing motherboards featuring Intel's 965/976 chip sets (including the Intel DP965LT I used and recommended in SOS February 2007) have had their BIOS updated to support the new quad-core models, and although some software applications, such as games, may not be able to utilise more than two of the four CPU cores, major MIDI + Audio sequencer applications such as Sonar and Cubase do already support four simultaneous processors, so you should get a huge hike in performance (between 80 and 100 percent) over a dual-core model of the same clock speed. It's hardly surprising that so many DAW builders are already offering Core 2 Quad-based systems.

Meanwhile, we're also starting to see motherboards featuring Intel's new P35 chip set, which will effectively replace the P965 and which supports a front-side bus speed of 1333MHz compared with the 1066MHz of the 965 chip set. It's also the first to include support for DDR3 memory. DDR2 RAM has been around since 2004 and is now available at speeds up to 1066MHz, but DDR3 will be available at 1066MHz, 1333MHz and eventually 1600MHz. P35 boards running DDR2 RAM seem to perform very much like existing P965 models, so you'll need to explore DDR3 to gain any real advantage, and it will initially be quite expensive — so you needn't abandon that 965 motherboard just yet!

A comprehensive set of Vista-related performance tests have been carried out by Vin Curigliano using two specially prepared DAWbench songs loaded into Steinberg's Nuendo 3 and Cubase 4 (you can read more about the background of DAWbench in PC Notes July 2006, and download these songs free from www.dawbench.com/benchmarks.htm). The hardware used comprised a PC equipped with a Core 2 Extreme QX6700 processor, containing four cores, each running at 2.66GHz, plus a Lynx Two soundcard (renowned for its driver performance at low latencies).

First up was the Blofeld's DSP40 test, running 40 stereo audio tracks, each with a four-band EQ and VST Dynamics, and then as many Magneto plug-ins as can be added before the song starts to exhibit any signs of audio break-up, adding first one to each of the 40 channels, then a second set, and so on.

At a buffer size of 256 samples (6ms latency at a sample rate of 44.1kHz) and above, there proved to be no significant difference between the test results obtained when running Nuendo 3 under Windows XP, XP Pro x64 and Vista 64 'basic' (ie. with the new Aero interface disabled), and only a tiny performance hit, of about three percent, with the Aero interface enabled. This is encouraging feedback for anyone who's already installed Vista, and particularly for those who run their systems with a latency of 6ms or above. I do this quite happily, as do many other musicians working with software synths and samplers. 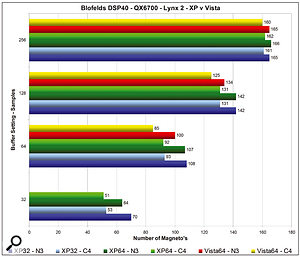 Here (reproduced by permission of Vin Curigliano of DAWbench) you can see the results of DAWbench tests running with both Nuendo 3 and Cubase 4 on Windows XP, XP Pro x64, and Vista 64 (with Aero disabled). Notice, in particular, the minimal differences across all platforms with a buffer size of 256 samples (and above), and the increasing difference between Nuendo/Cubase 4 and XP/Vista at lower latencies.

Those who need to monitor acoustic recordings in 'real time' need a lower latency, of 3ms or less, to avoid audible time lags (particularly troublesome for vocalists listening to their performances with headphones), and with such values the operating systems pull further apart, with the two XP versions remaining neck-and-neck down to 1.5ms (at 44.1kHz), by which time Vista 64 'basic' lags behind by around 6.5 percent and Vista 64 Aero by nearly 19 percent.

Following some suggestions that these initial results might be flawed, due to the fact that Nuendo is not officially supported under Vista, Vin re-ran the tests using Cubase 4, further muddying the waters when it was discovered that Nuendo consistently outperformed Cubase 4 with the DAWbench test at every buffer size. For instance, at 128 samples (3ms at 44.1kHz) Cubase 4 lagged behind by almost eight percent, and at 64 samples (1.5ms at 44.1kHz) it had dropped back still further, by nearly 14 percent (you can see these differences in the graph on this page).

Since I last mentioned DAWbench in this column, a second test has been released: L-Factor II runs 16 audio tracks, each, once again, with four-band EQ and Dynamics plug-ins, but this time additional tracks running Steinberg A1 soft synths are enabled one at a time, until audio break-up commences. This ties in with the way in which many musicians stress their PCs, and gives a slightly different spread of results.

Sticking with the low-latency 64-sample buffer size, running L-Factor II on Windows XP 32-bit inside Nuendo 3 resulted in a soft-synth polyphony of 450 voices, while Cubase 3 only managed 370. This is nearly an 18 percent difference and shows how even tiny differences between audio applications with apparently similar architectures can become magnified when a PC is pushed to its limits. On this test the XP Pro x64 version lagged behind its 32-bit counterpart, with 380 and 330 voices for the two applications, while Vista 64 with Aero disabled managed 350 and 300 voices respectively. You can study the full set of results at www.dawbench.com/blofelds-xp-v-vista.htm.

Cubase 4 owners will be disappointed at these results, but I should stress that the application/OS differences only appear with tiny buffer sizes, of 128 samples and below. Personally, I'm looking on the bright side. Steinberg are currently beavering away on Cubase 4.1 with extensive Vista optimisation, so we should expect significant performance improvements shortly for this combination, which could also move Vista audio performance ahead of Windows XP.

Overall, I should again stress that Windows Vista is still in the earliest stages of being used as a DAW platform. We are almost inevitably going to see performance improvements over the coming months, and hopefully we'll come to a point where we can enjoy Vista's various new features without having to take a backwards step in terms of audio performance.

Some Cakewalk Sonar users are experiencing a significant improvement in low-latency performance under Vista when running WDMKS drivers after installing a (seemingly unrelated) Microsoft 'microcode reliability update'. The update is claimed to improve the reliability of systems that use Intel processors, and you can read about all the details and download it from http://support.microsoft.com/kb/936357.

Several musicians downloaded and installed this update and quite coincidentally noticed that whereas they previously only managed around 5-6ms latency with WDMKS drivers on various Sonar audio projects, after installing the update they could reduce their latency to between 2ms and 3ms without any audio glitching.

This update is intended for Windows XP and Windows Server 2003 as well as Vista users, and has absolutely nothing to do with audio (this was subsequently confirmed by Cakewalk's Noel Borthwick, who checked with Microsoft). However, its improvement to low-latency WDMKS driver performance under Windows Vista was subsequently confirmed by others, including Scott Chicelli, the founder of ADK Pro Audio. The patch makes absolutely no difference to ASIO driver performance (which is already significantly worse for some Vista users than performance with WDMKS drivers) or to those with an AMD processor, although, according to Microsoft, it may indeed improve system reliability. If you want to try it, I recommend making an image file of your Windows partition beforehand, just in case you don't experience any benefits. After all, if a completely unrelated system patch can affect audio performance in this way, who can say whether another update might make it worse!