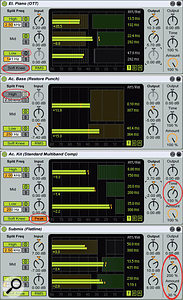 1: Four Multiband Dynamics presets have been altered to process individual rhythm-section tracks along with their submix. Red ovals indicate salient changes to the presets, but the levels, thresholds, ratios and time settings have also been edited.

As its control panel suggests, Live's Multiband Dynamics effects plug-in is bristling with options, but they come with a commensurate number of potential pitfalls. In trying to unravel this beast, I'll first suggest some experiments to help you hear what's going on and then explain some bread-and-butter applications. For a primer on how a compressor/expander works see the 'A Simple Analogy' box. There's more detail in Paul White's articles in the April 1997, December 2000, and January 2001 issues of SOS.

Multiband Dynamics lets you independently process three frequency bands by applying upward or downward expansion or compression relative to a pair of thresholds named Above and Below. It is equally useful for tweaking individual sounds and processing single tracks, submixes or the master track. A good way to get a feel for its controls and how it sounds is to apply it as a single-band processor to individual percussion hits, as we'll see in the following example.

2: Here a kick drum has been added to the ride-cymbal loop and high and low bands have been added to the setup from screen 3. Slight upward expansion and reduced outputs for the new bands proved to be the only tweaks necessary.

Find or create an audio loop containing a single ride cymbal, stick-hit, with a fairly long tail, and insert Multiband Dynamics on its track. Use the High and Low buttons on the left to disable the outer bands, leaving a single band covering the full frequency range. Leave the remaining settings at default values and play the cymbal loop. Watching Multiband Dynamics' orange-band input meters, adjust the mid-band Input knob so that the cymbal hits peak at around -20dB. When you apply compression or expansion, the orange bands will ride above or fall within the green-bar output meters to indicate the amount.

Set the Above and Below thresholds to -40dB by right/left dragging with the mouse at the edges of the threshold displays or by clicking the green A and B buttons and setting them numerically (see screen 3). Your cymbal hits will now peak well into the Above zone and fade into the Below zone. Click and drag down in the Above zone to dial in a noticeable amount of downward compression (the zone turns green) and then raise the Attack until the stick hit is clearly heard. Now click and drag up in the Below zone to add some upward compression (the zone turns orange). This will make the cymbal tail louder and longer. Spend some time playing with the release and Below-ratio settings to get a feel for their effect. Notice that with a long release the ratio makes almost no difference.

Now add a kick drum to the ride-cymbal loop. You'll probably find that the ride-cymbal compression doesn't work well for the kick. Click Multiband Dynamics' 'Low' button to add a new band below and try adjusting its frequency; you'll probably find the default of 120Hz to be about right. With no dynamics processing in this band (the default settings), the kick is still greatly improved. In addition to trying different compression settings, simply try adjusting the low zone's output level. That may be all you need to produce just what you want.

Finally, click the High button to turn on the high band. With the default settings (no compression and 2.5 kHz frequency) you'll notice a marked difference — the stick hit is more pronounced and even the kick seems a little brighter. Play with the band settings and solo it as needed to hear what's really going on (see screen 2). 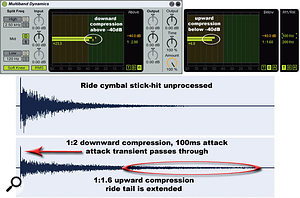 3: A ride-cymbal stick hit (top waveform) is processed with downward compression above a -40dB threshold and upward compression below a -40dB threshold. A 100ms attack time allows the stick-hit transient to pass through (bottom waveform). Note. in the Multiband Dynamics settings at the top left, that the high and low bands are disabled (greyed out High and Low buttons), resulting in standard, single-band operation.

Multiband Dynamics is great for microsurgery on individual sounds, but it also comes in handy for tweaking tracks and submixes. Four of the factory presets — Standard Multiband Comp, Restore Punch, Flatline and OTT — make especially good starting points for this.

The first step in editing any preset is to solo the high and low bands and adjust their frequencies and input levels. Next toggle each band's Activator button (above the Solo button) in order to hear how the dynamics processing affects the overall sound. You'll occasionally want to leave a band on but deactivated, so as to exclude its content from processing by the adjacent band. Use the Input knobs to bring the levels into a convenient processing range and then use the Output knobs to balance the results. The Time knob on the right of the panel scales all attack and release settings up or down; this is a fast way to enhance or tame the effect on fast level changes. The Amount knob scales down all ratio settings, which quickly reduces the amount of compression or expansion while maintaining the same proportions. 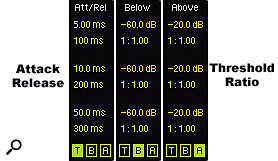 4: The 'T', 'A' and 'B' buttons reveal tabs for setting threshold, ratio, attack and release for each band of Multiband Dynamics' Above and Below processors. (The 'T' settings apply to both Above and Below.) Awkwardly, you must type the reciprocal of the value you want on the right side of the ratio (type '.5' when you want 1:2.00 and type '2' when you want 1:0.50).In screen 1, I've processed three rhythm-section tracks and their submix. For the electric piano, I've started with the aggressive OTT preset and deactivated the low band to avoid conflict with the bass. The electric piano has a small amount of built-in reverb, and the high-band upward compression emphasises that. The acoustic bass track starts with the Restore Punch preset, which consists entirely of upward expansion. I've turned the high band off and adjusted the thresholds of the other two bands. The acoustic-drums track uses standard multi-band compression (three bands of downward compression). I've changed the preset from RMS to Peak sensing and increased the Time knob to allow more transients. On the submix, I've started with the Flatline preset, then scaled the times by 200 percent and lowered the Amount setting to scale back the effect.

Although grossly oversimplified, this analogy might help you to understand the key settings of Multiband Dynamics (and, for that matter, any compressor or expander): threshold, ratio, attack and release.

Imagine you have a round input-level meter with a line at the 12 o'clock position — call that line the threshold. Your job is to manipulate an output-level knob based on the distance the input-level needle is from the threshold. The knob's centre position represents no change and turning it clockwise increases the output level, whereas turning it anti-clockwise decreases it. For expansion, you turn the knob in the same direction as the needle is moving, and for compression, you turn it in the opposite direction.

The common practice of representing attack and release in units of time (milliseconds and seconds) is a little misleading. In terms of our analogy, the attack and release settings limit how fast you're allowed to turn the knob (the speed limit), which involves both distance and time (dB per second), where the distance is often taken to be 10dB. Using downward compression as an example, a long attack time means that, although you are supposed to keep the knob at the position dictated by the input meter and the ratio, you might not be allowed to move the knob that quickly. Conversely, a long release time means that you might not be allowed to return the knob to centre as quickly as the needle moves to the other side of the threshold. In downward compression, you use longer attack times to avoid squashing percussive transients, and you use longer release times to avoid pumping.