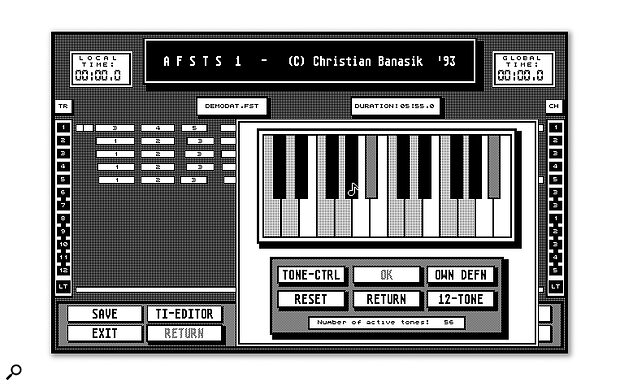 AFSTS's Track View window, with the Tone Map selector also visible; note that selected (greyed out) notes are de–selected from the final scale. Unhighlighted notes are the ones used by the software.

The new year has just arrived as I write this column, and already 2001's first release on to the expanding ST 'freeware' scene is upon us. There won't be many of you surprised to hear that it's an algorithmic composer — the Atari seems blessed with more examples than any other platform. Nevertheless, there's unexpected music to be had from the formulae at the heart of AFSTS, written by German composer Christian Banasik (with assistance from his brother Rudolf).

That unwieldy acronym stands for Algorithmic Film SoundTrack System. The software was actually developed as a tool to aid in the automatic generation of music for screenings of silent movies. Not that AFSTS can be locked to film or tape, exactly, but its user customisation is based around assigning hit points where changes should take place, so that the generated music appears to bear some relation to what's happening on screen. Of course, one could generate abstract soundscapes for home video productions with the software, but in fact anyone who'd appreciate having a reasonable amount of control over when changes take place in an algorithmic composition could enjoy working with AFSTS. Once the program is set up, the results will be predictable, with major changes always happening at the same place. The software could be used to generate music for many kinds of live event, including experimental dance performances and plays. 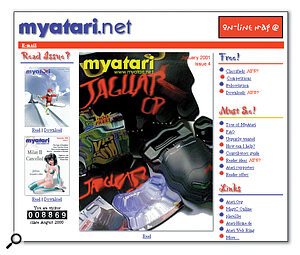 Hot off the e‑presses: the front page of the most recent issue of new online magazine MyAtari.

AFSTS isn't a simple program to use, but fortunately the edit screens are not numerous. The software doesn't manipulate incoming MIDI data, but generates it in response to data input offline by the operator. There are four main screens:

The results, as always, depend on the user. The tools provided, once fathomed, seem to allow the program to generate music that's less loop‑like and repetitive than some algorithmic software. It's easy enough to create convincing 'contemporary music' textures, but equally, depending on the scales you've defined and how skilled you've become at manipulating the Algorithmic Parameter Editor controls, it's possible to generate something a little more traditionally melodious. Definitely a program worthy of exploration.

Other interesting features of AFSTS include the fact that various screens can be printed out for reference, and that the program is able to generate a graphic diagram of each track's note and performance data — this looks very avant garde but provides a good visual impression of what will happen in a given performance.

Finally, as noted earlier, AFSTS is free: download it from the indefatigable Tim Conrardy's web site (Tim's also posted a short but invaluable tutorial at www.egroups.com/group/atari‑midi). Have a lurk, too, around the author's site for more background on the software — and the author!

Extra! Extra! Read All About It!

The Internet comes to the rescue again.

The Atari might now be too underground a phenomenon to support print magazines beyond a handful of fanzines worldwide, but online it's a different story. The underground can publish on the web, and that's where you'll find the recently‑launched, British‑produced MyAtari. Four issues have appeared as of this writing, offering wide‑ranging coverage of Atari&#150;related topics, and articles by knowledgeable devotees. As an enthusiast‑run, online publication, it costs you and I precisely nothing. You're requested to 'subscribe' (so that the folks running the show can keep track of how many people are actually interested), but it's not mandatory. However, the benefit of subscribing is that you'll be automatically notified of updates to the site.

My Atari is run and presented exactly like a magazine, down to its cover, but one significant enhancement over print is that once an issue is uploaded, that's not the end of the story: if it becomes necessary to update an article that's already in 'print', it's updated. Back issues can be read online or downloaded, though the current issue is an online read only. A lot of familiar names from the Atari world appear in MyAtari's pages.

One thing to note: don't get the mag confused with www.myatari.com. The latter is the web site of B&C ComputerVisions, an El Dorado, California‑based company who sell and service all manner of Atari‑branded stuff, including games machines and pre‑ST hardware.