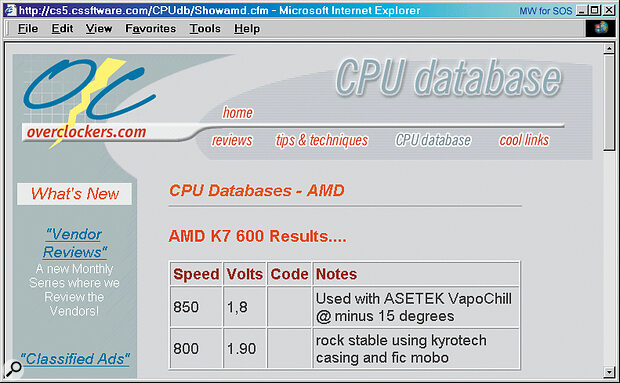 If you are thinking of attempting to overclock your processor, www.overclockers. com not only has extensive information on the subject, but maintains a database of successful attempts. Even the new AMD Athlon is included, with one brave soul achieving 850MHz from a 600MHz device using specialist cooling!

This month Martin Walker discusses processor overclocking, as well as bringing you up to date with the latest PC news.

I first mentioned the overclocking of processors way back in September '98's PC Notes, along with some dire warnings of what can happen when you start increasing the system buss speed by tweaking BIOS settings. In 'The Fast Lane' (SOS April '99) I expanded on these problems, as well as pointing out a few of the arcane solutions available, such as altering core voltages and cooling arrangements. You may therefore be a little surprised to learn that this month I've managed to overclock my Pentium II 300MHz processor to 450MHz. This may seem rash to some people, but attitudes are changing. Overclocking isn't solely the realm of the anorak any more, and several reputable PC magazines have already published overclocking guides.

In the past, it used to be possible to overclock by increasing the processor multiplier setting inside the BIOS. Every processor runs a lot faster than the motherboard which houses it, by a factor called the multiplier — for instance, my 300MHz Pentium II runs at 66MHz times 4.5, and a 450MHz Pentium II runs at 100MHz times 4.5. However, since August 1998 Intel have been locking the multiplier values of new processors to ensure that they are used at the 'correct' setting — this applies to all current Celeron and Pentium III models, and there isno way to unlock the multiplier. Those with older processors (such as the original Socket 7 Pentiums) can still try increasing the multiplier value slightly, but I never had much success with my Pentium 166MHz MMX machine, which occasionally crashed for no reason after this procedure (always, of course, at the most inopportune moment!).

My own upgrade was carefully thought out: I originally specified PC100 SDRAM memory when I bought my new PC, with upgrades in mind. All Pentium II processors running at 350MHz and faster, and all Pentium III models, use a 100MHz system buss which needs PC100 SDRAM modules. Every component of my system barring the processor was designed to run with a system buss speed of 100MHz, although with my Pentium II they actually ran at 66MHz. My Pentium II 300MHz (like the Celeron 300A) jumps from 300MHz to 450MHz when the system buss changes from 66MHz to 100MHz. This seems a huge change, but these two particular models have a high success rate for such a procedure. However, Intel made various changes to their designs during production runs, and in particular to the speed of the L2 cache chips, which range from 4.5 to 5.5nanoseconds. It's difficult to determine which chips a particular processor has without dismantling it, but mine was marked with the code SL2W8, and made in Costa Rica in week 31 (all good signs — I told you this was arcane!).

My final decision was taken after seriously considering the purchase of a Celeron 466MHz replacement processor (about £100). Given that my Pentium II 300MHz has long been out of production, and has little or no resale value second‑hand, I really had nothing to lose by trying out overclocking before I got out my credit card.

A few motherboards (notably those from Abit) let you make the system buss change from 66MHz to 100MHz by altering a setting in the BIOS, but most (like mine) check the processor and make the 'correct' setting automatically. I had to carry out the 'B21 procedure', which involves making a small physical change, thankfully reversible, to the processor. For those interested you can find full details at Tom's Hardware Guide (sysdoc.pair.com/). When I rebooted, my BIOS thought it had found a Pentium II 450MHz processor, and I was one of the lucky ones whose PC made it as far as the desktop without crashing. Some people simply get a black screen, and if you do you either return your processor to its previous state, or enter even more arcane territory by tweaking core voltages from the BIOS (if your motherboard provides these options — few do).

The most important thing at this point is to monitor your PC very carefully. Although occasional software crashes seem to happen to most PC owners, random crashes can happen without any warning if hardware is attempting to outstretch its capabilities, and a PC which randomly crashes even once a day is useless for serious work. Long term, running any processor at a higher speed will generate more heat, and this can cause failure after several hours when the chip has gone beyond a safe temperature. Once again, I was lucky that my Pentium II has a Deschutes 0.25‑micron core that operates at 2.0 Volts, and this runs cooler than the previous Klamath 0.35‑micron cores (such as the Pentium II 233MHz, 266MHz, and initial 300MHz model).

Although occasional software crashes seem to happen to most PC owners, random crashes due to hardware running 'on the edge' can happen without any warning.

I was also lucky that my motherboard features temperature sensing, and I could therefore use the shareware Hmonitor utility (hmonitor.hypermart.net/) which displays motherboard temperature and voltage values in real time from Windows. Absolute temperature values can never be guaranteed, since the temperature sensor is not part of the processor, but is only placed close to it on the motherboard, with the consequence that trueCPU temperature can be considerably higher than the measured value. However, once my system had been on a few hours the system temperature stabilised at about 38 degrees centigrade (an increase of 6 degrees on its previous value, but still within safe limits).

It would be better to bring this temperature down by fitting a larger heatsink or more powerful fan if possible, with the caveat that musicians will obviously prefer to avoid fitting any fan that makes more noise. However, after three weeks' intensive use I've had absolutely no problems, and am obviously very pleased with the increase in performance.

I must warn anyone considering overclocking that you really do need to know what you're doing — there are absolutely no guarantees that your processor will be suitable and you should be aware that you will nullify any guarantee by doing it. However, if you are prepared to run these risks, there is bucketloads of detailed information on the Internet to guide you — try

Western Digital are recalling a large number of their 6.4Gb Caviar hard drives, which apparently have faulty internal chips and are likely to fail in under a year. If you think you may have one of these drives, further information can be found on the WD web site.

With AMD's new Athlon processor proving exceptionally powerful in the floating‑point department, Intel are rumoured to be shipping a new 1.1GHz processor (currently codenamed Willamette) by the end of this year. Unsurprisingly, AMD are rumoured to be planning the release of a 1GHz Athlon in January.

After a tantalising wait, Wavelab designer Phillipe Goutier tells me that by the time you read this, Wavelab version 3.0 should be shipping. This is a huge upgrade, incorporating a new non‑destructive editing system called Audio Montage. Fades, volume and pan envelopes can be superimposed on the waveforms, and all run in real time — expect my review in SOS shortly.

Creamware's SCOPE system seems to be attracting some heavy‑duty support. SPL's Transient Designer is being released in two plug‑in forms — the Attacker module adds attack and punch to drums, loops and guitar sounds, while the more comprehensive Transient Designer deals with sustain as well, just like the analogue hardware version. These plug‑ins will be available over the web from Creamware's web site from the end of November this year.

After some problems with Echo's version 5.00 drivers for Darla, Gina, and Layla, a new version 5.01 has just been released. You can now lock the sample rate in the Echo Console, turn multi‑client audio and DirectSound support on or off, and lock multiple Darla24 cards together. Various problems have also been resolved, including those affecting Logic Audio 4 and GigaSampler LE, and I can happily report that my Gina card now works well with Native Instruments' Reaktor and has a latency of only 15mS.

Tips And Tricks In Print 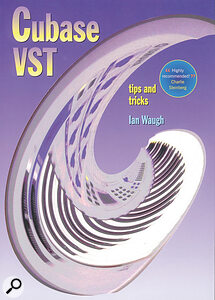 Ian Waugh's new book is packed full of Cubase VST hints and tips and could be just the job for a good Christmas read.

Ian Waugh must have an organised yearly masterplan, because the last time I reviewed one of his books in this column was exactly 12 months ago. This time — again through PC Publishing — he offers 150 pages of Cubase VST Tips and Tricks. He covers setup, hard drives, and working practices, and then moves on to more specific tips on recording, the Arrange page, tempo tricks, the Inspector, and editing (with individual chapters on the List, Drum, Score, and Logical editors). Further chapters cover audio recording and editing, audio and MIDI effects, mixing, quantisation and file handling, with two very useful final chapters on audio and MIDI troubleshooting. The book is completed by Appendices for key‑commands, the many Tools icons available, and some useful contacts.

Written in Ian's usual easy‑to‑read style, Tips and Tricks contains a wealth of useful material. Both Mac and PC versions of VST are covered, but this is the only problem — the book is based on the Mac version 4, and although the majority of information still applies to PC users, it can be frustrating to see goodies like Screen Sets, the MIDI Track Mixer, the extended Inspector, and the user‑definable Toolbar discussed. Thankfully Steinberg are poised to release VST version 4 for the PC in the near future, but until then Mac users will get a bit more from this book than those who have a PC. Despite this, there's still loads on offer, and at £10.95 I would recommend it to any VST user who wants to complement their Steinberg manual with wealth of accessible practical information. Even Charlie Steinberg is quoted on the back cover as saying "I'm a bit of an expert myself, but even I picked up some pretty useful tips," and praise doesn't come much higher than that! The SOS shop has it in stock, and the ISBN number is 1‑870775‑63‑5.