Automation is a key feature of any DAW. Basic breakpoint automation works in a similar, almost standard way in most DAWs on the market, but each usually offers its own twists and unique automation capabilities. This month I will discuss some of the cool automation tricks you can pull off using Studio One’s Paint tool.

In Studio One, conventional breakpoint automation is mostly created using the Arrow tool, but more interesting possibilities are provided by the Paint tool. Clicking the triangle in the lower right of the Paint tool icon drops down a menu that reveals eight different Paint tool settings: Freehand, Line, Parabola, Square, Triangle, Saw, Sine, and Transform.

The Freehand setting is your basic automation drawing function, which allows you to draw any shape you wish. Line enables you to generate line segments: an easy way to create linear ramps in the automation.

Parabola draws more or less exponential curves. This can be useful in ways that go beyond the obvious. For example, when you finish drawing in automation with the Paint tool or pasting in automation copied from elsewhere, sudden jumps in the automation can inadvertently be created at the beginning and/or end of the gesture. Some automation, notably SSLs, resolves this problem with a feature known as ‘fadeback’ in which a smooth transition is generated from the point where you pasted or dropped out of automation recording to the rest of the automation. Applying the Parabola setting at an undesired automation step can simulate this function, as can be seen in Screen 2. 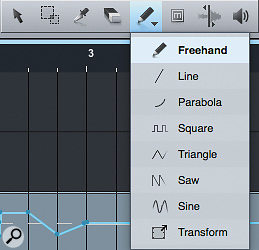 Screen 1: The eight settings for the Paint tool. The Transform setting at the bottom offers special fun.

The next four Paint settings are our old favourite waveforms from analogue synthesizer days. Depending on what parameter is being automated, drawing in one of these waveforms can create anything from auto-panning to filter sweeps to trills. The automation value where you start dragging becomes the centre line for the waveform, and dragging vertically as you draw a waveform (Studio One calls them ‘figures’) increases or decreases the waveform’s excursion from this centre line. 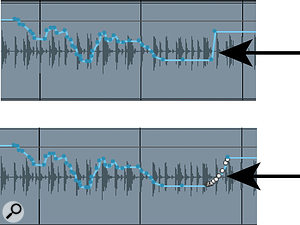 Screen 2: The top image shows a sharp discontinuity created when automation recording was stopped. In the bottom image, the Parabola setting of the Paint tool was used to smooth the transition, after the fashion of a fadeback function.Note that Snap affects drawing in automation the same way it affects other operations. The frequency of a drawn-in modulation waveform is not constrained to the grid quantise value, but the waveform’s period must correspond to a multiple of the grid value, and can never be less than one increment. If the grid is set to 1/4, for example, the waveform period can’t be less than a quarter note.

Most of the basics, useful as they are, resemble what you find in other DAWs. That last setting of the Paint tool, Transform, is where Studio One takes things in a different direction. Using the Transform setting is actually quite simple. After selecting the setting, simply drag over the automation you want to alter. As we will see, it is important to drag over only the automation you want to change. A yellow box will appear over the area you dragged, and the transformations happen when you drag the handles or edges of this yellow box.

There are three different transformations, called Skew, Distort and Stretch (see Screen 3). Which transformation is performed is determined by what you drag. If you drag any of the four corner handles, you invoke Distort, which essentially creates a fade of the data in the yellow box. Drag towards the centre of the box and the data is faded down; drag away from the centre and it is faded up.

Screen 3: The actions of the Transform setting are executed by dragging. Any corner can be dragged to Distort, and any edge dragged to Stretch. Skew is only performed by dragging the handles on the sides. The handles at the centre top and bottom do nothing.If you want to fade the modulation in at the beginning and out at the end, my admonition about transforming only what is selected comes into play. Accomplishing both of these fades requires two gestures. First, select some of the data at the beginning of the section (but not the whole section) and drag one of the left corners towards the centre to create the fade-in. The fade duration is determined by the length of the selection, so if you want a slow fade-in, you need to select more time than for a quick fade-in. Next, select some data at the end of the section and drag a right corner towards the centre to create the fade-out.

Fades like this could just as easily be accomplished by automating a modulation amount control, but we are just getting started. Moving right along, now try dragging one of the right corners away from the centre of the box instead. The data is faded up, causing the modulation amount to increase over the duration of the selection.

So much for the corners. Hovering over any of the edges of the yellow box instead causes the cursor to change to an arrowhead. Now you can perform Stretch.

Some automation, such as lead vocal levels, can get very complex, with automation moves for each word, or even each syllable. Automation this complicated is often created listening to the track soloed, but it might sound different when put back in context. Maybe once the rest of the band is in the automation seems too extreme and some words or syllables that were taken down in level are getting lost, even though the overall shape of the automation moves is right. Stretch can fix that.

Screen 4: The actions of the Transform setting can be combined to create sophisticated effects, as in this filter cutoff modulation. Select the whole section of automation and drag the top or centre bottom edge towards the centre. The entire section of automation is scaled down, so that the moves are less extreme. It’s sort of like dynamic compression for automation data. Again, there are other ways this can be done, but in those situations where the Transform setting works, it can be extremely fast.

Dragging the left or right edge stretches or compacts the data in the yellow box to a different duration. If the automation uses a waveform, you are in effect changing the frequency, but only for the automation you have drawn; no additional cycles are created if you compact the data, for example.

Finally, we have the handles on the centres of the sides of the yellow box. These create Skew, possibly the most fun of the available transformations, though probably the one with the fewest practical applications. Dragging a Skew handle up or down tilts all of the automation in the entire selection. I like to use this in conjunction with the waveforms. I can make a sine wave modulating a filter cutoff into a wobbly sweep from high to low or vice versa.

Combining these transformations can result in some pretty crazy — but useful — modulations, as is shown in Screen 4. As usual, Studio One has the standard needs covered as well as the next DAW, but brings out the spice jar for those special touches.