Studio One Tips & Techiques By Larry the O 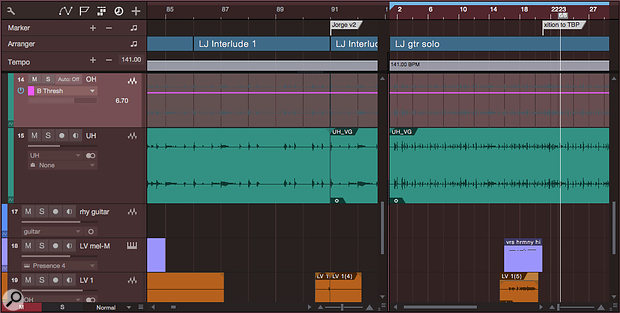 This screen shows both the Arranger track, near the top (with the blue named sections) and a Scratchpad on the right side. The main timeline is on the left.

We introduce Studio One users to some of the riches on offer in the new version 3.

The arrival of a major version upgrade in DAW software may not quite be Christmas in June, but the release of Studio One 3 is certainly cause for excitement. While some new features, such as step recording, are familiar from other programs, much of what has been added exemplifies what Studio One does so well: injecting a fresh perspective into music production. A lot of new features have been added to the program, and there is not enough space in this column even to mention them all, let alone describe them in detail. I’ll be looking more closely at a lot of these features in coming months, and of course SOS will be printing our usual detailed review — but, for now, let’s just get right to it.

First of all, there are now only two versions: Studio One Artist and Studio One Professional. Studio One Producer is gone, but most of the features that differentiated Producer from Artist are available as add-ons to Artist.

While Studio One is versatile enough for many kinds of music production, it has always exhibited a slant towards electronic music and dance-music production. Two major new features supply even more support for those approaches to music creation. The first is the Arranger track, which enables you to identify sections of your song and then drag them around to create different arrangements of your song on the fly.

To mark the sections, you double-click in the Arranger track above each one to create a new section and then drag the edges to the section’s actual boundaries. (The manual says only dragging is necessary, but it didn’t work that way for me.) Once the sections are marked, you simply drag in the Arranger track to move them around. You can insert sections, replace sections, Option-drag to duplicate you get the idea. When you drag a section, everything goes with it: automation, instrument assignments, markers, the works.

The other new tool for arranging is the Scratchpad, a method for developing variations on song sections. Inspired by the Studio One team’s observations of the way people copy data past the end of a song for experimentation, the Scratchpad does exactly that: copies selected data to a location far down the timeline. You can experiment to your heart’s content in a Scratchpad without affecting the original, but anytime you like what you come up with, you can simply drag the Scratchpad contents back into your song. You can have as many Scratchpads as you like, which could be useful for commercial or TV composition jobs where you need to produce versions of a piece at several different lengths. The different Scratchpad timelines are colour-coded to help keep them straight.

PreSonus anticipate that the Arranger track and Scratchpad will often be used as a one-two punch, creating variations and then rearranging the song to include them. If you are working with loops and sequenced tracks, these features work very smoothly. With live players or music that incorporates tempo or speed changes, it can get trickier to move things around and have it all fit precisely. Nevertheless, these are powerful songwriting aids.

I am excited by the addition of multi-instruments. In essence, this is a flexible method for layering sequenced instruments. A multi-instrument appears as a single channel in the mixer, but can be expanded to show the channel used for each layered instrument, enabling different plug-ins and sends to be used on each. This means one instrument in a multi can have chorusing or delay while the rest don’t. 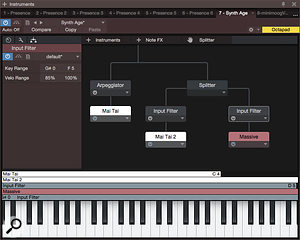 A multi-instrument using two instances of the new Mai Tai instrument and one of Native Instruments’ Massive. The first Mai Tai has a Note FX arpeggiator, while the second Mai Tai and Massive are velocity-layered. The inspector on the left shows that Massive only kicks in when velocity exceeds 85 percent, which, for those who think in MIDI values, is a velocity of 108.

Multi-instruments are an excellent place to make use of Studio One’s new Note FX, of which there are currently four: Arpeggiator, Repeater, Chorder and Input Filter. These are all familiar MIDI effect functions, but Studio One uses an internal data model with higher resolution than MIDI, so although they can be used with external MIDI instruments as well as with soft synths, PreSonus don’t call them MIDI effects. Input Filter has particular importance because it allows the user to set a velocity range, as well as a key range.

Instruments in a multi can be seen as parallel paths fed from the same source. Note FX can be inserted after the common source or on individual instrument paths in the multi. Using an Input Filter on each instrument in a multi, you can set up velocity-layered or velocity-switched sounds; there are no velocity curves yet, but maybe they will be coming soon.

The channel editor is the next big new feature to discuss, and it really is something cool. There are two parts to the channel editor — macro controls and effects routing — and I’m rather chuffed about both.

Macro controls allow the user to assemble a compact collection of controls for a small subset of key parameters out of the typically large number available. For instance, you are likely to want reverb time and pre-delay controls for a reverb close at hand more often than, say, diffusion. Wouldn’t it be nice to have just those few settings in front of you, rather than having to sift through them all? Well, now you can — but what takes this from a nice idea to an amazing boon is the use of macro controls with a chain of three or four effects. The macro control for a channel not only gives you eight knobs you can program to control parameters, but also eight buttons. And two X-Y pads. That’s a lot of control, and it’s not even the most powerful part. The most powerful part is that you can assign multiple parameters to a single control, and assign separate scaling curves to each parameter. This is huge. Without separate scaling, it can be quite difficult to make control of multiple parameters from a single control work over more than a very small range, if at all.

The other part of the channel editor is effects routing, and that is just as stunning. The typical effects chain is serial; if you want to have parallel processing paths you have to set up multiple channels and a send and, oh my, it all gets unwieldy. With effects routing, however, you can specify multiple effects paths within a single channel. These multiple paths are created by splitting the signal, which can be done in three different ways. The first way is the most obvious: the same signal feeds two or more paths. However, you can also do channel splitting, where the left and right channels of a stereo signal pass through different effects chains, or frequency splitting, where the signal is split into multiple bands, each of which has its own effects chain. While there are lots of crazy things you can do with all of this routing, it is also great for making common, very utilitarian, tricks easy to do.

Studio One’s bundled instruments have also been amped up. The Presence sample playback instrument is now Presence XT, powered by a new synthesis engine. Presence XT has other enhancements, such as the ability to access content in EXS, Giga, and Kontakt (up to and including version 4) formats, an improved reverb algorithm, key-switched articulations, a much more accessible interface, and more.

Mai Tai is a brand-new virtual analogue instrument that has a basic two-voice-plus-sub-oscillator architecture, but adds a noise source and a “character generator”. 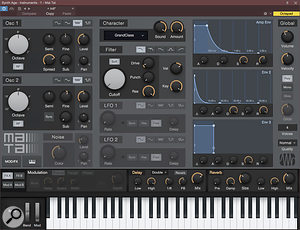 The new Mai Tai virtual analogue instrument includes a Character parameter that creates basic tone characteristics, a noise generator, Drive and Punch parameters for the filter, and other niceties.

There are also significant enhancements to Studio One’s controller support. To name the two biggest, Studio One 3 supports PreSonus’s CS18AI Ethernet AVB control surface now, so you can have physical faders and knobs to play with, and, on the other end of the spectrum, an iPad app called Studio One Remote will be available by the time you read this (it almost is as I write this).

There are many, many other enhancements, some small, some small but important, some not small at all. Colour options are rampant, automation segments can be curves instead of just straight lines, multi-touch support is built in, in-app content purchases are available, tag-based browser searching is available. You get the idea. As I said, I’ll zoom in more on new features in the next few months.

Plainly, Studio One 3 offers a great deal of new territory to explore, and I have the feeling I’ve barely dug into it. If you want to get a handle on it before the next upgrade introduces even more, I suggest you download Studio One 3, set aside some playtime, fire up the studio, and get to it.

From DX to MODX with Manny Fernandez | Podcast
6 days 51 min ago.