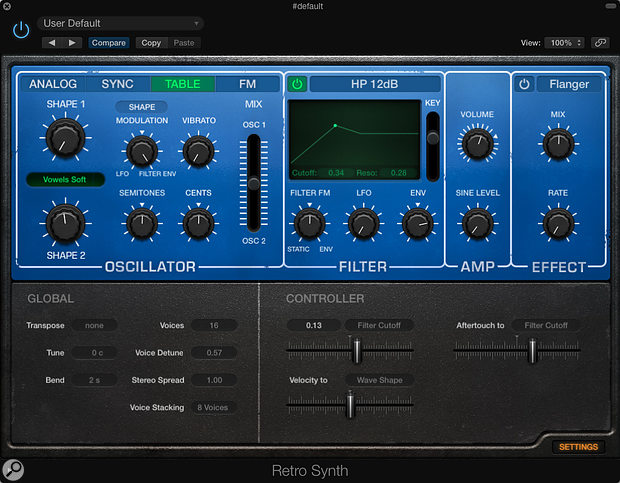 Screen 1: Clicking on the settings panel in the bottom right-hand corner reveals some interesting extra options. The Voice Stacking and Voice Detune fields can be used to turn the thinnest of wavetables into a huge pad sound.

Explore the wavetable section of Retro Synth to make your own unique sounds in Logic.

In this month’s workshop we look at the wavetable section of Logic’s Retro Synth. We’ll look at some of the basics of the interface and a new feature of the 10.1 update that allows you to create your own wavetables.

When the Retro Synth initially appeared in Logic X I must confess to feeling slightly lukewarm about its capabilities, as it seemed to mirror things provided by existing synthesizer engines such as the ES2 and EFM1. However, over time I have come to appreciate the simplified GUI and easy workflow. With the new features added in 10.1 the wavetable synth goes beyond what was possible in the ES2 and, therefore, it’s definitely time to revisit it...

On a software instrument track add an instance of the Retro Synth and, from the top left radio button, choose the Table option. This selects the wavetable engine. If this is your first time using a wavetable synthesizer it’s worth noting that the main difference between this and a more traditional analogue-modelling synth is the oscillator section. In a wavetable synth the main building block for sound creation is a look-up table of oscillator waveforms with a potentially huge range of shapes. The position in the table dictates the waveform you are currently hearing, and this can normally be modulated by LFOs and envelopes to give the harmonic movement often associated with wavetable sounds. Before we begin looking at the synth in detail, navigate to the filter section and turn the filter off using the on/off button.

In Retro Synth choose a wavetable from the menu in the Oscillator section. Click on this menu and select the Morphing Harmonics table. Retro Synth has two oscillators that can each play back a waveform from that table. The waveform for each oscillator is set by the Shape 1 and Shape 2 controls and the balance of the two oscillators is set using the Mix slider. Set the Mix slider to the maximum value so that you are listening to just oscillator 1. Now move across to the Shape 1 control and slowly rotate it from hard-left to hard-right, listening to the wide range of waveform timbres that you can use as the basis for creating your patches. Once you have found a pleasing waveform, slide the Mix slider to the middle position so you can hear the combination of oscillators 1 and 2 at equal level, and move the Shape 2 knob to find a combination of waveforms that works. The lack of movement between oscillators can leave patches sounding a little thin, so let’s use Retro’s Unison engine to fatten things up a little. Click on the Settings button in the bottom right-hand corner: set the Voice Stacking field to 8 Voices and the Voice Detune to around 0.57 (see Screen 1). This creates a pleasant chorus effect that is often useful when creating pad sounds.

Now that we’ve had a look at the interface, let’s make a choir pad. Choose the Vowel Soft wavetable, leave the Voice Stacking set to 8 and set the Detune to 0.55. Next, set Shape 1 to 0 and Shape 2 to 0.5, set the Modulation knob to hard-right and make sure it’s set to control Shape. Go to the filter envelope and set the Attack to 4000ms and Release to its maximum setting of 10s. This will create a slow, rising modulation. Now soften the onset and ending of each note by going to the Amp Envelope and setting the Attack to 68ms and Release to 2200ms. To remove some of the bottom end of the sound, set the Filter to a high-pass type by choosing HP12 and use the filter graph to adjust the Cutoff to 0.34 and Resonance to 0.28. Turn the Env knob in the filter section to the three o’clock position. The filter envelope will now modulate both the cutoff of the high-pass filter and the shape of our oscillators. If you want to give the pad sound more of a scooped quality then a nice technique is to go to the Amp section and turn up the level of the Sine oscillator to around 50 percent, then raise the cutoff of the high-pass filter to effectively leave a hole in the lower mid-range of the sound between the fundamental and the filtered wavetable.

Now we have played with some of the built-in wavetables, let’s move on to creating our own. Go to the Oscillator section and click on the waveform menu and choose the ‘Create Wavetable from Audio File’ option. Now if you navigate to an audio file Retro Synth will try to convert this into a wavetable. A much quicker way of accomplishing the same thing is to simply drag and drop an audio file on to the waveform menu. Impressively, the Retro Synth seems to cope with converting a wide variety of audio formants, and I was broadly successful dragging and dropping WAV, AIFF, MP3 and M4A files. Start by dragging in a song from your iTunes library (see Screen 2), then Retro Synth will inform you how many waveforms it created in your new wavetable. Go to the bottom of Retro Synth and click the disclosure arrow to display the extended parameters, then go to the Audio File Analysis menu and click through the options from Highly Relaxed to Highly Selective. When set to Highly Selective the wavetable import creates far fewer unique waveforms and, depending on the material, sometimes won’t do anything. For more experimental creation of waveforms the Relaxed settings work much better. 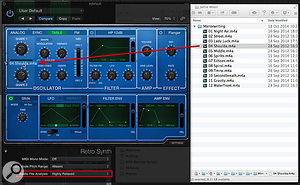 Screen 2: You can drag your own audio into Logic’s Retro Synth to create your own wavetable. It even copes with entire songs in compressed audio formats such as MP3 and M4A.

You can also take a much more considered approach to creating wavetables by preparing an audio file containing a range of audio content you think would make good waveforms. Create an audio track, and then drag on to it samples sourced from a range of instruments, for example a single note from a violin sample pack, a single note from a flute, and so on. Once you have a range of samples move the regions on the track so that they have a clear portion of silence between each of them. Now go to the application menu bar and navigate to Edit / Join / Regions to consolidate your instrument samples to one audio file. Set the Audio File Analysis menu to Highly Selective and drag the audio file into the wavetable synth. Now Retro Synth will look at the audio file and try to create a wavetable for each instrument sample, using the periods of silence as markers for where the next wavetable should start. As before, experiment with mangling your wavetable using the shape parameters, filter options and Unison settings.

Lastly, there is a whole wealth of wavetables online that other people have created for use in other synthesizers and, with a little work to combine them into a single audio file, these can be converted by Retro Synth. When researching this article I stumbled upon a wonderful site by a musician called Adventure Kid who has created an extensive library of over 4000 single-cycle waveforms (http://www.adventurekid.se/akrt/waveforms). You can download them for free although it is reasonably suggested you make a small donation. You can add these waveforms to Retro Synth using the process outlined above, although I did have a few problems with some of them not being recognised, so be prepared for a little experimentation!