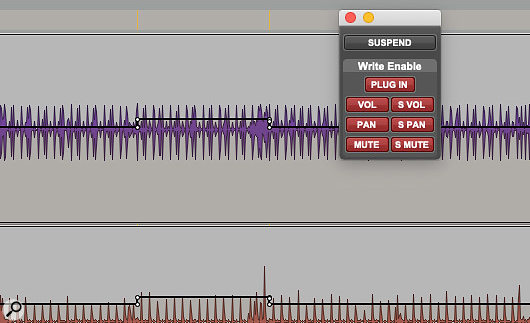 The Automation window as it appears in standard (top) and Ultimate (below) versions of Pro Tools. As you can see, there are numerous extra features in the latter! 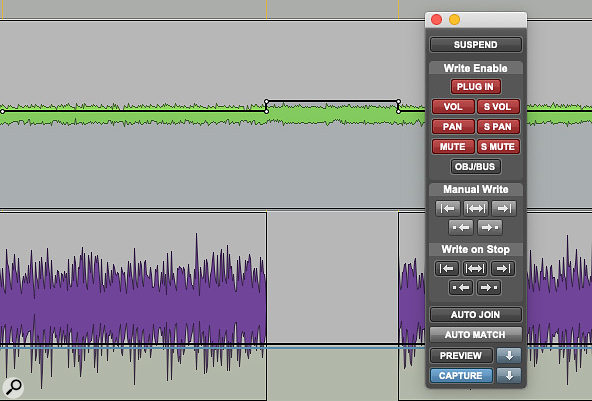 Snapshot automation in Pro Tools Ultimate can be a huge time-saver.

The distinction between Pro Tools Ultimate and Pro Tools used to be simple to communicate in the days when those products were known as Pro Tools HD and Pro Tools LE — though even in those days, we had the slightly confusing twin products of Pro Tools LE and Pro Tools M‑Powered. The distinction was principally one between a system that did its mixing and audio processing using dedicated DSP hardware, and one that used only the native processing available courtesy of the processor in the host computer. It's beyond the scope of this article to go over the changing landscape of computer hardware and the role of dedicated DSP in audio, but since those days the distinction in terms of features and capabilities between a Pro Tools and a Pro Tools Ultimate system has been something of a moving target.

One reason why features that used to be 'HD-only' have migrated to standard Pro Tools is to enable Avid's 'Avid Everywhere' strategy, which allows sessions to be shared online between users with very different systems. An example of a now-universal feature that used to be available only to HD/Ultimate users is VCA faders. VCAs used to be the number-one thing I'd cite when discussing the advantages of Pro Tools Ultimate software over standard Pro Tools, and having them available to all has really changed my perception of the two products.

An HDX rig offers low-latency monitoring and freedom from the 32-input limit, but these days, you don't need HDX hardware to run Pro Tools Ultimate software. Depending on the work you do, you might want to do so in order to gain access to surround formats, or take advantage of something which receives less attention but is just as significant: advanced automation features.

Music producers might not use automation in the same way or to the same extent as people working in post-production, but if you engage fully with the automation features available in Pro Tools Ultimate, they can transform your working methods. At the same time, they can get complex, and occasionally automation can feel like an impediment rather than a time-saver. To get automation to work for you rather than against you, it helps to get to know some of these advanced features which, while perhaps lacking the immediate appeal of a new plug-in, carry the potential to improve your mixes far more than any bus compressor or premium reverb ever could.

Honourable mentions have to go to Trim mode and the 'manual write to' and 'write to on stop' buttons and, of course, the brilliant Preview mode, but I'll concentrate on Capture mode here, as it is one of the first features I'd use to illustrate just how useful advanced automation can be when mixing a typical piece of music.

Capture allows users to take automation values across multiple parameters and apply them elsewhere in a session. It isn't suitable for copying automation playlists that change over time, so if you want to duplicate your lovingly crafted vocal rides, you'll need to use copy and paste operations. However, if you want to take a static parameter value and use it elsewhere in your session, Capture can help. Copying a static parameter value sounds underwhelming, but the value of this feature comes from the ability to capture multiple static values in a single operation. The ability to capture a snapshot of your mix and use it elsewhere is very useful indeed, and by using standard Pro Tools modifiers, it is possible to capture the status of every automation-enabled parameter at a particular point in the mix and apply it elsewhere. This will be extremely familiar to people who mix live sound, where static changes between bands or songs are standard practice. The ability to copy mix settings from verse 1 to verse 2 in a mix can speed things up dramatically, and the use of these settings as a basis from which to make changes is facilitated by Preview mode, which we'll examine another time.

The ability to copy mix settings from verse 1 to verse 2 in a mix can speed things up dramatically.

Using captured automation data elsewhere involves 'punching' it to the timeline. If we see priming and capturing parameters as the 'what' part of this process, then punching is the 'where' and the 'how'. The data can be punched, either at a single point or to a timeline selection, by clicking the Punch Capture button followed by one of the 'write to' buttons. Writing to an edit selection is the natural choice when punching automation from verse 1 to verse 2 or similar, but you can write to beginning or end, or to the next or previous breakpoint, just as when writing automation on a first pass.

Duplicating a handful of parameters is all very well, but the real power of Capture emerges when you add the Alt key when clicking the Capture button. This captures every automation-enabled parameter in the session in one operation, generating a true snapshot of the whole mixer. Confusingly, though, the Capture button doesn't change colour, so visual feedback is limited, but if the capture buffer was previously empty, the Punch Capture button will turn blue to indicate the presence of data in the buffer. To empty the buffer and return the Punch Capture button to its original grey, just toggle the Capture button, something I like to do just to get some visual feedback when capturing. The captured data can be punched in the same way as with a single parameter, but you'll see multiple parameter changes across multiple tracks.

If you want to capture automation from only some of the tracks in your session, the standard modifiers Alt+Shift will capture only for the tracks you have selected. This can be useful in cases where changes in instrumentation make capturing all tracks inappropriate. The role of track selections is relevant to capturing automation, but the point on the timeline from which values are captured is dictated by the timeline selection rather than by the edit selection — so, if you are one of those people who regularly unlink your timeline and edit selections, you will find that automation is captured from the selected position on your timeline as indicated by the blue arrow on the timescale ruler, rather than from the blinking black line of the insertion point on the automation playlist.

Once captured automation is punched to its new position, it is likely to need tweaking to best suit its new location and it is here that a complementary automation feature, Preview mode, can really help. This is an ideal candidate for another column coming soon.

Advanced automation is a killer feature of Pro Tools Ultimate, but because of the learning curve and the potential complexity it introduces, it can be something of a hard sell to music users who can get by drawing in automation manually. Life is too short to draw in automation, though, so if you have access to these advanced features and you're not using them ,you owe it to yourself to brush up so you can spend more time agonising about bus compressors... 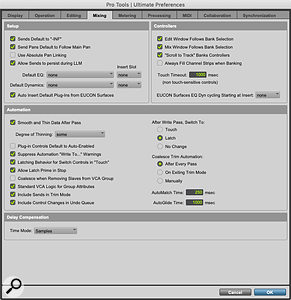 Both Capture and Preview can be utilised while the transport is rolling, but I find I often tend to use these features with the transport stopped. For this to work it is necessary to enable the 'Allow Latch Prime In Stop' preference, which is not enabled by default.

Once enabled, this lets you prime and set parameters for automation before punching into write, which is useful for any situation where writing multiple parameters of automation simultaneously would be difficult or impossible due to most of us being cursed with only 10 fingers or a single mouse pointer.

If you've never tried Latch Prime In Stop, you really should!

To quickly access the automation playlist of a particular parameter, use the shortcut Command+Ctrl-click (Start+Ctrl-click on a Windows PC) on the relevant control for any automation-enabled parameter to quickly toggle to that parameter's playlist. To return to the waveform display, Command+Ctrl-click on the track name in the track header in the Edit window. This is particularly useful when using a control surface with conductive encoders: the experience of holding Command+Ctrl and tapping encoder caps for sends and plug-in parameters on an ICON work surface completely sold the concept to me when I first tried it.