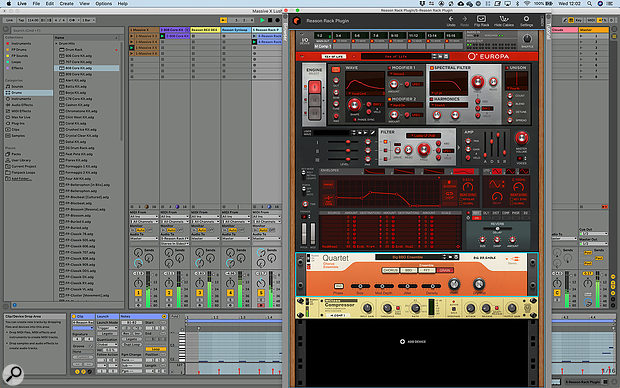 Screen 1. Reason running as a plug-in — what a time to be alive!

With Reason now available as a plug-in, there's plenty to get to grips with for new and old users alike.

Reason 11 is here after a short public beta phase. Its primary new feature is the ability to run the Reason Rack as a plug-in. This month we take an overview of how this works and what you can (and can't) do.

While I enjoy working in Reason as a stand-alone DAW, I've spent as much time over the years using it as a Rewire client alongside Live or Pro Tools. So I was excited to learn that Reason 11 adds a plug-in version, offering the chance for me to simplify my workflow and keep projects in a single file. In fact Reason 11 no longer supports Rewire, and there's currently no AAX version of the plug-in so I've had to reassess my workflow overall.

If you're new here after adding the Reason plug-in to your DAW, welcome! The Reason plug-in gives you the real core of the Reason experience, in fact the 'classic' experience from the days before Reason had a master mixer and sequencer. You can use the Reason plug-in simply to use single instances of Reason's synth and effect devices in your DAW project, or you can chain devices in the plug-in's virtual Rack, or get your teeth into complex modular patching. 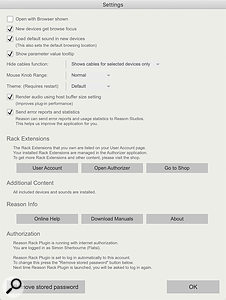 Screen 2. As well as general preferences, the plug-in Settings have everything you need to manage your Reason content, Rack Extensions and license.Reason Studios appear to be expecting that some users may never touch the stand-alone app — there's a separate comprehensive manual for pure plug-in users, and the plug-in has everything you need to manage your content and add-ons, and to handle authorisation independently.

The plug-in gets installed as standard with the Reason application. There's no option to install only the plug-in, or to not install it. It's a VST3 plug-in on Mac and Windows, and additionally Audio Units on the Mac. The plug-in and the Reason app share the same resources in terms of sound libraries and Rack Extensions, and any change you make to the installed content or the Browser are reflected in both versions.

Authorisation is handled the same way in the plug-in as in the app: you can sign in with your account if you're online, use an Ignition Key dongle, or permanently license your machine. The Settings page in the plug-in (Screen 2) has options for installing Rack Extensions and sound content, and for de-authorising your system.

I was excited to learn that Reason 11 adds a plug-in version, offering the chance for me to simplify my workflow and keep projects in a single file.

There are two versions of the plug-in: 'Reason Rack Plug-in' for adding instruments, and 'Reason Rack Plug-in Effect' for processing signals through the Rack. Either way, if you insert the plug-in you'll start off with an empty rack and a splash screen with some suggested devices (Screen 3). You can choose one of these (by double-clicking), or open the Browser to start populating the Rack with any of Reason's devices. 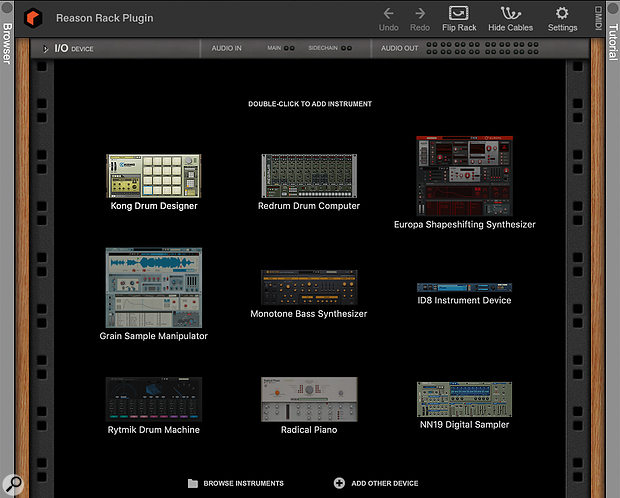 Screen 3. A fresh instance of the Reason plug-in offers up some suggested devices, but you can access the complete library of devices and sound presets.

Despite the manual patching possibilities in Reason, the plug-in makes it simple to just load and start using a single device. A single instrument dropped into the Rack will immediately respond to MIDI input from the track and output stereo audio. Likewise, with the Effect version of the plug-in you can just add a processing device and audio from the DAW track should pass through with no manual patching required. Add effect devices to an instrument or your previous effect and they'll auto-route together as they do in Reason.

The main difference from the stand-alone app is that there's no master mixer that devices patch into. Instead there's the 'I/O Device' that lives at the top of the Rack and passes audio into and out of the plug-in. The I/O device has four inputs and 32 outputs. The first device in the Rack will auto-cable to the first two outputs; if it's an effect it will take an input from the plug-in's first input pair (see Screen 4, below).

You can manually cable devices to any output. If you create multiple instruments in a Rack they will auto-cable to different output pairs. By default, though, these layered instruments will all mix to the main stereo output. On the front of the I/O Device you'll see that the stereo outputs for pairs 2 to 8 all have a 'To Main' button, which are all on. To route channels as discrete outputs into your DAW you need to switch off these buttons or use outputs 17-32.

Screen 4. Instead of a master mixer, the Reason plug-in has a simple I/O device for routing in and out of your DAW.

Each Reason Rack plug-in instance has a single MIDI input port available to your DAW, and it ignores MIDI channels. In other words, it's not possible to control different devices from different tracks in a single plug-in instance in the way you can with many multi-timbral plug-ins and samplers. All devices in the Rack receive incoming MIDI, so multiple instruments will automatically be layered. If you don't want this to happen (for example you're using an instrument's effects to process another instrument) a workaround is to put devices into a Combinator, and use its Programmer panel to disable MIDI for specific devices.

The MIDI input restriction has forced me to rethink how I'd normally use Reason within a DAW. With Rewire everything is in the same Rack, with DAW tracks sending MIDI to specific devices. Working with the plug-in, you really need a separate instance for each instrument you want to play.

If you're a stand-alone Reason veteran, there's one keyboard shortcut baked into your muscle memory, and it's going to drive you crazy for a while when using the plug-in. The Tab key flips the Rack around in Reason, showing and hiding the rear panel cabling area. Not so in the plug-in, where your DAW has ownership of the computer keyboard. Instead you need to click the Flip Rack button in the plug-in's toolbar.

The same goes for Undo. This one can be dangerous, as it feels totally natural to hit Command/Ctrl-Z while in the Reason Rack, but this of course triggers your DAW's Undo. Another one is Delete. The best bet is to think more mousey, and use right-click contextual menus in the Reason plug-in.

What if you want to save your work in the Reason plug-in, or move stuff between the plug-in and stand-alone app, or vice versa? The plug-in cannot open a Reason song file, and given how embedded the mixer is in the Rack it probably wouldn't make much sense to do this. As with so many things in Reason, the Combinator is your friend here. Embedding a collection of devices into a Combinator gives you a portable block that you can open in either Reason or the Rack plug-in. The quickest way to do this is select the devices, then right-click and choose Combine.

A neater option if you are only working in the plug-in is to save out the whole Rack configuration as a plug-in preset. The Reason Rack plug-in doesn't provide its own preset manager, instead it uses the regular plug-in settings system built into your DAW. This does mean that you won't be able to move presets between VST and AU hosts. I've been using the plug-in in Live, which has a standard Save button on all plug-in devices, and saves presets into Live's Library as .vstpreset files.

There's lots more to explore with the Reason Rack plug-in. Next time we'll focus on how to integrate it in Live, including audio routing, how to use the Side-chain feature, and how to use automation.