Making Masters In Studio One 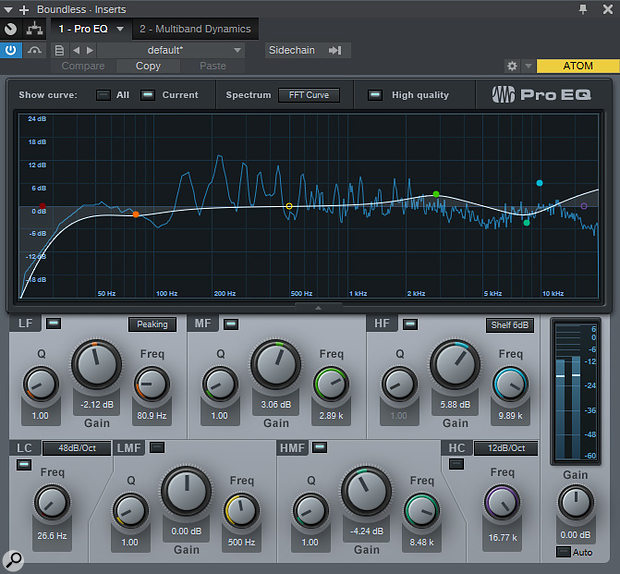 We look at the sweetening tools on offer for mastering in Studio One.

In last month's workshop, we walked through the Project side of Studio One to familiarise ourselves with the tools and metering that'll aid us in our mastering adventure. This month we are going to stop procrastinating and do the work of using plug-ins to process our music and see if we can conjure up a releasable product.

To begin I find it helpful to think about what it is we're trying to achieve with mastering. The goal of "making it sound awesome" is a worthy one, but how do we go about achieving that? Start with smaller goals. You're going to want all the track in your EP or album to be of a similar level so that the listener doesn't have to turn anything up or down while playing it. Individual tracks might need some EQ or compression to bring them in line with other tracks. The frequency content of each track needs to be balanced so that it's not too mushy at the low end or too screechy at the top. You'll want to be hitting levels that are standard for your sort of music so that your track will fit with others on the radio or streaming services. Push for a nicely filled stereo image. And ultimately you want the tracks to be coherent, sitting well together so that they flow and sound good to your ears.

There are a great many plug-ins that will help you achieve these sorts of aims but for this workshop I'm going to stick to those found natively in Studio One. Although the plug-ins may be specific, the ideas and processes are relatively universal and applicable whatever plug-ins you are using.

Each track in a Project has inserts for adding plug-ins, and unless your tracks are movements of a larger piece of music, treating them individually makes the most sense. However, there's some wisdom in dropping a limiter on the Master output to prevent the possibility of some accidental clipping distortion getting into the final product. You'll find the Studio One Limiter under the Dynamics section of the plug-in list. I'd opt for the '-1dB limiting' preset and leave it at that. The Master insert is also a good place for measurement tools such as the Binaural Pan and Phase Meter plug-ins we discussed last month.

Last month I talked about the loudness metering and using it as a guide to our mastering. Along with the live meter each track has a Loudness Information section just above the inserts which will analyse the track both pre and post the insert effects. This will give you overall values for EBU R128, True Peak (TP) and RMS. As a rule of thumb, I suggested that we were aiming for an EBU of -14dB LUFS, a TP of less than zero and an RMS of at least 6dB less than TP. So as you make adjustments to EQ and compression plug-ins you should regularly check back and re-run the loudness analysis to see how the track is measuring up. Remember to switch it to Post FX.

Top tip: make sure you click to select the track that you want to process. I can't tell you the number of times I've moved the play head to another track and carried on adjusting the plug-ins on the previous one!

Equalisation is all about the frequency content, so we want to be working with the Spectrum Meter visible while adjusting EQ settings. In its FFT Meter setting, this can display the magic slanted pink noise line that is often a useful guide when it comes to deciding which aspects of our mix are overcooked or underdone in this respect. The Studio One ProEQ plug-in is found in the Mixing section of the plug-in list, and it too can display the FFT Curve spectrum in the EQ display, which is helpful.

The first places to start are the extremes of the frequency spectrum, dealing with the low bass and the shimmer. Enable the Low Cut (LC) band and set the shelf curve to 48dB/octave to keep it nice and steep. Pull that in from the left until you just start hearing the impact. Cutting below 25Hz should remove the non-musical rumbles and help take some of the energy out of the low end. Then you can push into the top of that curve a little with the Low Frequency (LF) band to flatten the usually beefy area around 50-100 Hz. Do the same with the top end if you feel it needs it and experiment with it with reference to the FFT Meter.

Use the bypass button often to compare the changes. You're not looking for massive transformations; you're looking for subtle changes. Try swapping between peak and shelving on the Low and High frequency bands. When using Peak, your mouse wheel can be used to adjust the bandwidth as you hover over the point in the display. Hold the Shift key to make very small adjustments on the knobs. One tip is to add a boost around 2kHz in order to help with the intelligibility of vocals. All the time compare and keep listening.

Each track in a Project has inserts for adding plug-ins, and unless your tracks are movements of a larger piece of music, treating them individually makes the most sense.

Studio One comes with two multiband compressor plug-ins. We'll look at Multiband Dynamics in a moment, but first let's consider the less intimidating Tricomp compressor. Tricomp is a three-band compressor that does a lot of things for you automatically, letting you focus on how the sound changes when you turn the big knob in the centre. With the Low and High knobs set to zero, the big knob compresses equally across all bands, but once you start moving the High or Low knobs, those bands are set relative to the middle band — so if you want to compress the low end more than the middle, kick the Low knob up a couple of notches. The Low and High frequency knobs set the crossover frequencies of the three bands.

This is where you can start pulling the RMS and TP closer together and getting your LUFS up to -14dB, increasing the gain a little to compensate for the compression or any subtractive EQ you applied earlier. Tricomp also has a useful Saturation knob to add a bit of 'analogue warmth' to the sound. If you are having trouble finding the balance between too much and not enough compression, try using the Mix knob to blend in some of the original signal instead of reducing the compression. Regular use of the bypass button is vital to get a sense of how your track is changing. Studio One also places a bypass button next to where you drop the inserts, which will bypass all the plug-ins at once, which is great for hearing how far you've come.

For more precise compression you need to turn to the five bands of the Multiband Dynamics plug-in. It has a nicely visual interface which can be tremendously helpful if your mastering skills are on the humble side. The main display shows you the input level of the bands at the top and the output level at the bottom. In the Input section there's a single white line that defines the Low threshold level at which compression occurs. There's a somewhat hidden second white line at the top of the display that defines the High threshold, which you'll find if you hover your mouse over the top edge of the display. In the Output section there's a line for the upper output level and one for the lower, which control a combination of ratio and gain. As you move these lines, the output section shows a deepening red as the compression intensifies and attenuates the signal, or green for boost. 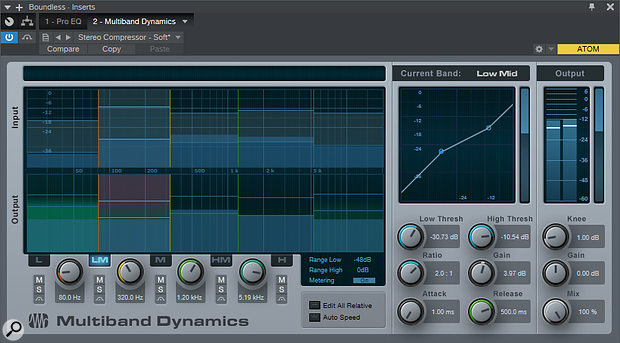 Each band within the Multiband Dynamics plug-in offers both a high and a low threshold, allowing simultaneous upward expansion and conventional compression.

As you select and manipulate each band, the compression is shown in a more traditional display to the right, where you can also access the individual controls. At the bottom of the display are four knobs which set the position of the crossover boundaries between the bands, and next to those are three very helpful buttons. The Mute, Solo and Bypass buttons allow you to focus in on a particular band and work on getting that right in terms of width and compression. There are some useful presets included with the Multiband Dynamics plug-in that might give you an idea of what you're heading for.

The idea of having both a high and a low threshold is that the signal above the high or below the low one gets pushed into the area between them, simultaneously pushing up quiet sections and pulling down peaks across each band. You can play with this by watching the little blue dot that indicates the level in the compression display. Set the high and low threshold so that the dot only bounces around on the line between them. Then use the upper output level to change the gain range and the bottom output to pull the overall gain up. This can seem like a visual exercise but it's a good place to start before using your ears to decide how much dynamics you want to sacrifice for the sake of punch and loudness.

If you have external hardware audio processors like compressors, limiters, old bits of wonderfully vintage gear or modern DSP boxes, then you can employ the brilliant Pipeline XT plug-in to access them directly from Studio One. Pipeline XT loads up like any other plug-in inserted onto the track, but all it does is route the audio out of a spare output on your audio interface, through your hardware and then back in via a spare input. The plug-in has a Mix blend knob so you can balance how much of the signal is being processed. I wrote a workshop on using the Pipeline XT plug-in recently (SOS March 2019) and it's a great way of including hardware directly into your workflow.

That's enough to be chewing on for this month's workshop, but there are still some things to cover. Next time, we'll look at how to work on the stereo imaging and what options there are for preparing your mastered tracks for delivery to your chosen format.