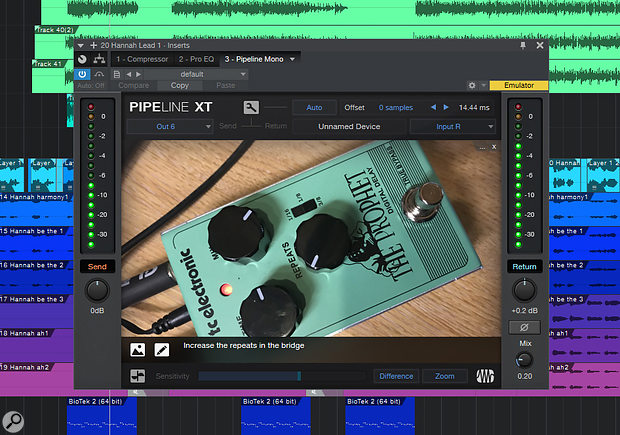 Not a photo-realistic plug-in GUI, but an actual photo: Pipeline XT allows you to capture an image of the hardware unit it's feeding.

With Pipeline XT, integrating outboard gear is almost as easy as loading a plug-in.

The Pipeline plug-in has been part of Studio One since its launch in 2009, but in version 4.1 it's been reworked into Pipeline XT: an even more elegant way of incorporating hardware sound processing into a DAW mix.

This is a task that seems simple enough in theory, but in practice, all sorts of issues can be caused by the latency of your audio interface and the terrible things it can do to phasing. Hardware integration can also be complicated, inconsistent and hard to recall when you come back to a project after using the hardware for something else. Pipeline XT can sort all of this out, although you still need to keep your wits about you.

Pipeline XT takes advantage of any spare audio outputs and inputs on your audio interface to create an effects loop, so if your audio interface only has a single stereo input and output, or you are mixing on your laptop's built-in headphone output, this is not for you. To begin, you load it like any other plug-in as an insert on the track you want to process. The plug-in interface has drop-down menus labelled Send and Return. Set these respectively to the output that is connected to your outboard processor's input, and the input that will be picking up the processed signal. If you don't see all of your inputs and outputs in the list, select the Audio I/O Setup option, and you'll be taken to Studio One's Audio I/O Setup window where you can add any missing ones.

As the audio to be processed will be running out of your audio interface and back in again, it will be subject to both output and input latency. Pipeline XT will compensate for the amount of latency that is reported by the audio interface driver. However, drivers don't always report the latency accurately, and if you're routing through digital outputs, or to a digital processor, conversion further down the line can introduce additional latency that the driver can't know about. So, to make Pipeline XT work a bit harder, click the Auto button. It will send a pulse out through the effects loop and display the source (orange) and the returned signal (blue) overlaid. (This should be done while the outboard processor is in bypass to avoid any accidental signal alteration.) You can then use the Offset to manually adjust the latency until the waveforms are visually aligned. Save the resulting setting as a preset for when you next use the same hardware in a project. 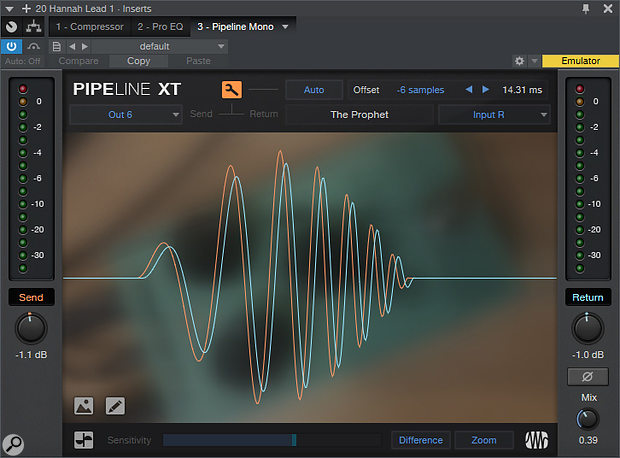 Pipeline XT's Auto button allows you to measure the latency and compensate for it manually. When the red and blue waveforms are exactly aligned, compensation is set precisely.

Your studio is complete and forever patched into a logical and fully labelled layout, right? No, neither is mine. In fact, my recording and mixing space is more like a constantly evolving exercise in chaos management. The problem with the original Pipeline plug-in was that PreSonus seemed to assume that we would either use it and move on, or that our setups remained the same. With Pipeline XT, they have at last woken up to the reality of our ever-changing needs. And the solution is ridiculously simple: you can now add text notes and a photo to Pipeline XT's user interface.

Once you have your hardware set up, take a snapshot on your phone and send it to yourself on your studio computer. Pipeline automatically scales the image down to 1200x1200, and assuming your camera skills are up to scratch, all your hardware settings will be recorded directly in the plug-in, and thus saved with the project. Next time you open the project you'll be able to carry on where you left off, provided you can still find the hardware in question. Add some text about how you were fiddling with a particular control, and you are back in that creative zone. Completely genius. (Of course, PreSonus haven't magically given your hardware the ability to magically turn its own knobs: you've taken a photo to enable you to see how you had the controls set last time you were using it, so that you can manually reset them.)

One thing to note is that Pipeline XT enjoys the landscape photo format and will, annoyingly, rotate any portrait images.

You can use Pipeline XT with any sort of hardware sound processor you like. Rackmounted outboard gear and vintage processors are what you most commonly see in YouTube demonstrations, but you can use it to route audio to anything from guitar pedals to a Eurorack modular rig. Desktop effects boxes like the Erica Synths Acidbox or Analogue Solutions Dr Strangelove are becoming increasingly common in live performance, and Pipeline XT can bring them back into the mixing stage.

You'll need to pay attention to matching up the levels in your Pipeline effects loops. That means using a DI box or attenuator to route line-level signals through your guitar pedals or using proper line input and output Eurorack modules such as the Joranalogue Receive 2 and Transmit 2. But those are ideals, and in reality, you can get away with all sorts of things as long as you're careful to listen for distortion and noise. For example, I was able to patch my TC Prophet digital delay pedal directly into my Steinberg UR28M interface by using the latter's hardware level control to reduce the output, and using an instrument input for the return. It worked a treat.

The only difficulties I experienced in using Pipeline XT were nothing to do with the plug-in itself. The monitoring software and setup of my UR28M had me scratching my head for quite a while; I rarely use more than the main outputs, and it turns out that the other four were configured to be used as alternative speaker outputs and so were always mirroring the main outputs, meaning that whatever output I used, I got continuously rising feedback to oblivion even through a simple delay pedal [You say that like it's a bad thing — Ed.]. So, if you are not getting the result you expect, the first place to look is your audio interface's setup and control software.

Once you've overcome your audio interface issues, correctly wired in your hardware and dialled in the latency compensation, Pipeline XT really is a doddle to use. You have send and return gain with LED metering so you are always in control of your signal, which is handy if you aren't matching levels up 'properly'. There's also a wet/dry Mix knob which is easier to set and recall here rather than on the hardware unit (if the hardware actually has one). All the time you're getting a real-time send and return signal displayed in the main part of the screen: a sensitivity slider sets whether the scope is always updating or just on detected transients. It's entertaining to look at but I haven't found it particularly useful except for latency calibration. 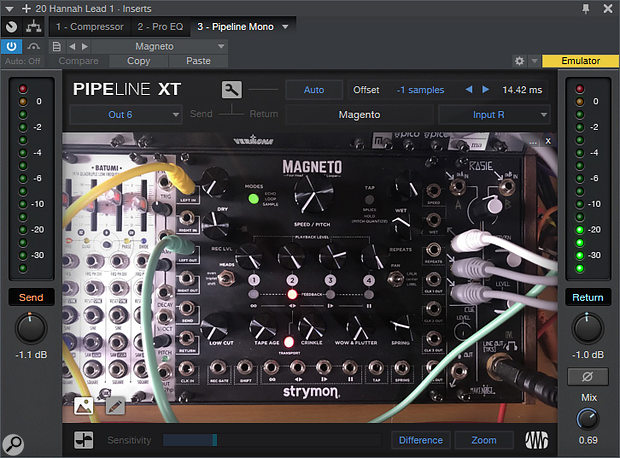 Pipeline XT isn't useful only with traditional hardware outboard: modular synths can also be brought into play for sound shaping.

Having achieved great results with my TC Electronic digital delay guitar pedal, I took a loop to my Eurorack setup and the Strymon Magneto Tape Echo module. I happen to also have a Strymon AA.1 module in my rack; designed to help you route signals out of a Eurorack rig and through guitar pedals, it simply boosts or attenuates the signal by 18dB depending on which way it's going, and allows you to bring signals into the modular on quarter-inch jacks. This, it turns out, is the perfect interface for a Pipeline XT Eurorack effects processing loop. I'm not convinced that a photo and notepad are going to be enough to capture the extent of the modulation I'll start applying to Magneto, but you can't expect it to cover all eventualities.

Given the chaotic nature of my studio, I've previously found it too much of a faff to incorporate hardware equipment into my mixes, but Pipeline XT makes the faff factor low enough for me to hop over. Using hardware inserts has become so simple that I might find myself doing this a lot. Just remember, though: when you're bouncing down a project that uses external outboard, this must be done in real time!

Here's a great PreSonus video, presented by Marcus Huyskens, that explains how best to use Pipeline XT.