Inside Studio One Project Window 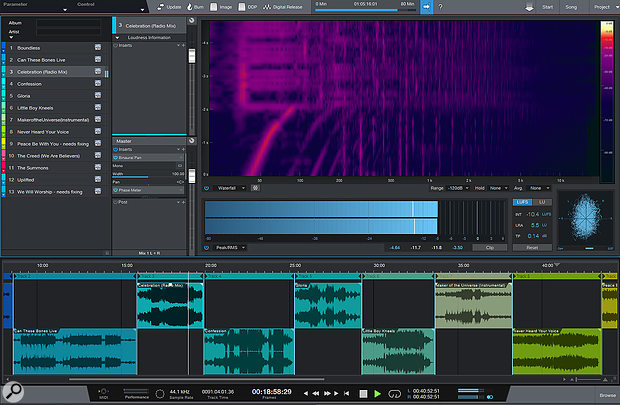 A typical mastering Project, with individual songs laid out along the timeline at the bottom.

The mastering side of Studio One can get a little neglected, possibly because thinking about mastering would suggest the laughable notion that you've actually finished a track. But if you ever do reach the point where no amount of fiddling with faders and adjusting arrangements is going to make your track any more fantastic, it's time to dust off the Project mastering tools.

I find that mastering is best approached differently from mixing songs. A professional mastering engineer would inevitably come to your music with a different set of ears and ideas, but on the assumption that we're doing this ourselves, the Project side of Studio One gives us the opportunity to look at our music differently, and that can be very helpful. You'll probably uncover things in mastering that will make you want to scurry back to your Song to fix it in the mix, and that can be a useful advantage in doing all this yourself. But there should also come a point where you start to worry less about the mix and more about how the track stands by itself or amongst other tracks as part of an album of music.

In this month's workshop, we're going to walk through the Project side of Studio One to get to grips with the workflow, meters and tools provided. Next month, we'll get into the mastering plug-ins and processing.

Once you've created a Project, the next step is to bring in some audio files. These can be added by dragging and dropping from your operating system, from the Studio One browser that hides on the right, or using the Project / Import File menu item. Once added, they appear alternately along a pair of lanes at the bottom of the screen; the reason there are two lanes is so that you can move adjacent files relative to each other and set markers for your whole Project without things overlapping visually. This gives an excellent first overview of your new album (I'm going to keep calling it that until it becomes true). You'll probably notice that the only uniform thing about your tracks is how non-uniform they appear!

Studio One defaults to giving you a two-second gap at the start of each track, but you can change this by clicking and dragging, or by manually entering a gap length in the track list at the top left. You can navigate, zoom in and out and loop sections just as you can in the Song editor, and the Project page also features basic editing: for instance, you can tidy things up by pulling on the fade in/out handles or trimming the start or end of each track. Tracks also feature gain lines that can be grabbed and adjusted, which is useful for evening out levels across tracks within a project. Start markers for each track are set automatically to the beginning of the audio, but can be moved if you want to inject more silence before the music kicks in. You can also add extra markers if you want individual movements within an extended piece of music to show up as separate CD tracks.

You might also find it very revealing to load up suitable reference tracks, to provide both sonic and visual comparisons.

Once you engage playback, the screen lights up in PreSonus' trademark light blue all over the metering section. There are three main displays:

The Spectrum meter is the most prominent, and provides no fewer than eight ways to visualise the frequency content of your track in real time. The first three divide the spectrum into frequency bands based on an octave, third-octave or semitone; the final one, Segments, is similar to the third-octave display. FFT and Curve represent your audio as a continuous jagged line, with minor visual differences and then we have two scrolling sonograph meters in vertical (Waterfall) or horizontal (Sonogram) aspect which plot frequency against time, with colour used to denote intensity.

They all have their uses in helping you visualise how your music distributes itself across the frequency spectrum. The first three are very clear, yet I find them difficult to read until I've turned on the Average curve, which adds a white curve on the screen showing the average frequency content at the resolution of your chosen meter. As you watch the curve move, any sudden changes in the frequency levels become much more obvious. Ideally, it should just bubble along smoothly.

Hover the mouse over the FFT meter and this helpful 'pink noise' line appears.

I imagine the meter most commonly used is the FFT. It has a high resolution, seems responsive and the way it billows with the music is delightful — and when you roll your mouse over it, you get a neat feature that doesn't appear on any other modes. This is called a 'pink noise line' and it shows how the frequencies should be spread to achieve a wide and smooth frequency range. It's the perfect tool for people who are not sure what they're trying to achieve in mastering. If the high frequencies fall away from the line then you know you could do with a bit of a boost at that end, or if the bottom end is pushing too high then a bit of low-frequency compression would be no bad thing. [For more info on pink noise mixing/mastering, check out Eddie Bazil's 'Mixing To A Pink Noise Reference' workshop in SOS December 2014 — Ed.]

The pink noise line is just a guide; this isn't some computer game where you must fill the track with frequencies to match up to the line, and you should always trust your ears first. But it can help you start to unravel this mastering business and give you clues as to what sort of plug-ins you could add.

You'll probably uncover things in mastering that will make you want to scurry back to your Song to fix it in the mix, and that can be a useful advantage in doing all this yourself.

The peak meter obviously shows you how closely your music is approaching 0dBFS, the largest amplitude that can be represented; the RMS reading is a kind of short-term average. A good rule of thumb is to retain a minimum of a 6dB difference between the peak and RMS readings. Depending on the material, you might want to consider a bit of compression if the RMS value is typically 12dB or more below the peak level.

The other meters provide more sophisticated ways of optimising the dynamic range and level of your music. The three K-system meters are designed to help you meet loudness levels appropriate to different types of music. K-12 would be considered a modern broadcast level, K-14 for acoustic instruments and K-20 for orchestral music. Turn on K-20 for your rock track and you'll find it up in the red zone.

EBU R128 is a more recent and more sophisticated implementation of a similar idea, and is very useful, not least because it gives you readings in LUFS (Loudness Units Full Scale), the units used by loudness normalisation algorithms on most streaming services such as Apple Music, Spotify and YouTube. For commercial music, you should be aiming for somewhere between -23 and -14 LUFS. The aforementioned streaming services tend to enforce a threshold of -16 to -14 LUFS, and if your track is louder than this, it'll be turned down on playback. You'll find LUFS values in a box to the right of the meter: hit the Reset button to get a new measurement if you jump around in a track. The other thing to understand is that in LUFS mode, the two bars in the meter don't represent the left and right channels. Instead, the upper one shows short-term loudness, and the bottom one momentary loudness. The orange box indicates the loudness range.

Hiding over on the right is a little asterisk-like display known as the Phase Meter — if it's too small for you, drop the plug-in version (found under Analysis) onto the Master insert and use that instead. The Phase Meter shows how the energy in your music is spread across the stereo field. The Correlation meter at the bottom is an indication of what happens when the left and right signals are summed to mono. For a mono input this will display +1, and the Phase Meter a vertical line. With stereo material it's more likely to be bumping around between 0 and 1, which is fine, but if the reading falls below zero, it indicates possible problems with the relative phase of the left and right channels, which will make your track sound pretty bad on a mono playback system. These issues can be caused by the over-use of widening or stereo imaging effects.

If you want to audition your track in mono, which is a good idea, load a Binaural Pan plug-in (found under Mixing) into a Master insert and hit its Mono button. How much of your mix is lost when you make it mono? This is still important for radio mixes, and a lot of home assistant and Bluetooth speakers are mono too.

Now that we have a better understanding of what the Studio One Project page is trying to tell us, we can start working on our tracks to forge them into a coherent and releasable whole. Join me next month as we forage into the world of mastering plug-ins looking for those sweeteners and enhancers.