Add Space, Colour & Interest To Your Tracks By Eddie Bazil 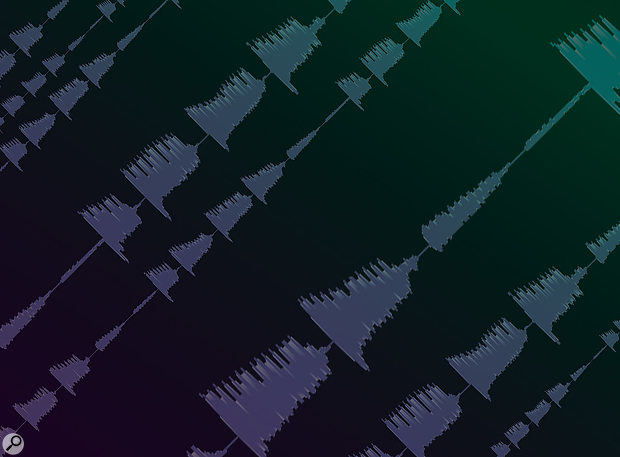 Splitting out your stereo signals into separate Mid and Sides tracks can open up a world of creative options in your mix.

In this article I'll take you through some cool but simple Mid-Sides techniques that add space, colour and interest to your tracks or overcome common mixing challenges. Now, I realise that some of you regard Mid-Sides (M‑S) processing as powerful voodoo that's best avoided, so I'll make everything really easy to follow. While some simple maths can explain the conversion between left-right (L‑R) stereo and M‑S stereo, you won't need it here (though if you do want to know more, check out Hugh Robjohns' explanation: https://sosm.ag/mid-sides-explainer). All you really need to understand is that the Mid signal is what you hear when you fold your stereo mix down to mono, and the Sides is everything else — any frequencies in the left or right channels that disappear in mono.

Converting L‑R to M‑S and back to L‑R again is a breeze: all you need is an M‑S encoding/decoding plug-in. Your DAW may include one, but cross-platform options are available from Blue Cat Audio, Melda Audio, Goodhertz, and DDMF, amongst others. I've used Voxengo's excellent freeware MSED here.

You'll find a ZIP file of hi-res WAV audio clips for each of the step-by-step exercises in the right-hand Media sidebar on this web page; feel free to download these source files and work through the exercises in your own DAW, or just to listen to the clips of the results. [The SoundCloud MP3 examples embedded in this article are purely for instant auditioning purposes.]

For most creative M‑S processing I like to split the original L‑R source out to two tracks in my DAW (I've used Cubase here but it works in any DAW). This allows me to process the M and S components of the signal independently, and a quick glance at the mixer makes it obvious what's going on. I can throw whatever processing I want at either the Mid or the Sides only, and can send the results anywhere else in the DAW. As you'll see, this opens up some wonderfully creative options. I suggest you save my routing matrix as a template in your DAW:

And that's it: the track for the original stereo source is now split into separate Mid and Sides tracks. You can apply any effect or process to the Mid or Sides tracks, or to both, and it's all summed back to L‑R at the master stereo bus so you can hear the result normally. You can also balance the M and S components to taste by altering the Mid or Sides track's level in various ways: using the DAW's track gain or fader controls; using the gain knob in the relevant MSED instance; or changing the original stereo track's send levels. To me it makes the most sense to use the gains on MSED, as you can then do all your M‑S work (muting, balancing etc) in one place, and it's easier to use the matrix as a template for other sources you want to process.

Exercise A: Processing A Drum Beat 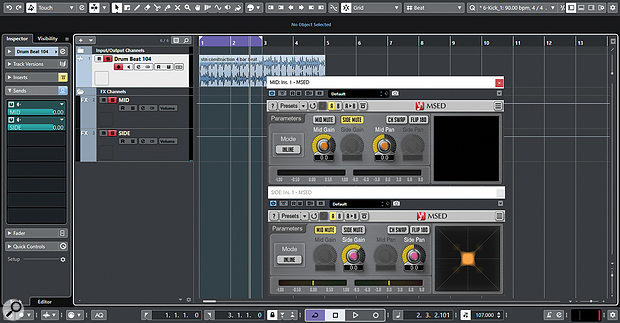 Here, a stereo drum loop has been split into separate Mid and Sides tracks using Cubase's send controls and Voxengo's freeware MSED plug-in. The drum loop source track does not feed the master bus directly. Applying a 1/8 delay, with very little feedback, only to the Sides can create a nice shuffling effect without causing the overall sound to lose solidity.

Our first technique provides the basis for several that follow — by processing only the Sides component of a stereo drum loop, we'll create a cool shuffle effect to add interest. Import the stereo file 'drum-beat-104.WAV' to the first stereo track (the source track in your matrix) and name the track accordingly. If you want to use a different file that's fine, but note that for M‑S techniques you must start with a genuinely stereo file featuring different L and R signals — a dual–mono signal saved as a stereo file won't work.

Insert a delay plug-in after MSED on the Sides track (I've used Waves H-Delay, but any stereo delay is fine). Set the DAW tempo to match the file (104 bpm), and the delay to 100 percent wet and a straight 1/8 tempo-sync'ed delay, with very little feedback. On playback, this should combine with the dry Mid signal to create a lovely shuffling type of effect, and give the drum beat a whole new feel but, importantly, without compromising the solidity of the loop's bottom end. The following clips are the results:

drum-beat-104-sides-solo: The processed Sides component only (the delay effect in isolation).

drum-beat-104-ms-delay: The full stereo result, with the unprocessed Mid and processed Sides balanced to taste.

A similar approach can inject ambience and motion into a staid piano line, by creating a delay tail that echoes and hangs in the air. Again, we'll add an effect only to the Sides component, leaving the Mid to provide a sense of focus and clarity. 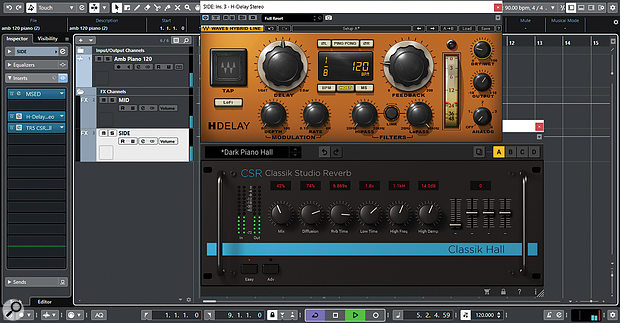 With similar routing to the drum loop example, a rather staid piano part is treated to a blend of reverb and delay, to create an ambient wash — but again the dry Mid keeps things nicely in focus.

Start with the same delay you used for the drums, and after this insert a reverb. I've used IK Multimedia's excellent Classik Studio Reverb but, again, any will do. The key to success is not to overuse either the delay or the reverb; they need to be blended by ear in such a way that they combine to form a single texture. To do this, set the wet/dry mix of each effect to taste. (Instead of using the wet/dry controls, you could instead send the Sides track to a delay on a separate track, and send that on to the reverb, but there's little to be gained by that in this case, and it's easier and tidier to use them as inserts.) To hear the results check out these clips.

amb-piano-120-delay-rev: The full effect, with dry Mid and processed Sides — the piano sounds deeper and wider than the original, but note the lack of an obvious 'hollow centre' that often results from some other stereo widening techniques.

Traditionally, beat producers 'lift' drum sounds from vinyl records and layer these samples to combine their different characteristics into a unique new sound. But simply slapping one sample on top of another usually means losing some clarity and impact. Why? Well, if two layers include similar frequencies at different amplitudes, the louder sound masks the quieter one; and the sounds will also be smeared in time where two layers play the same frequencies at slightly different times. 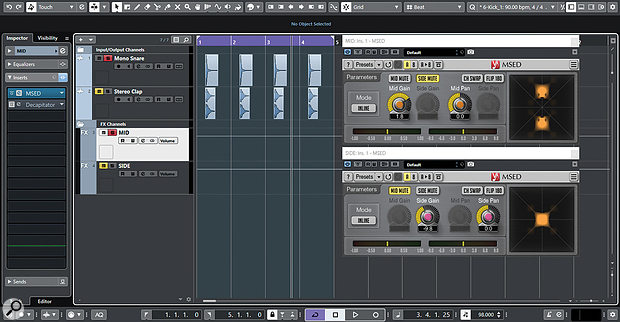 Mono sounds have no Sides component, but you can still use them in the same M‑S matrix, as with the snare drum in this example, where a mono snare is layered with the Sides component of a clap sample.

To get around this, the most effective layering technique is to choose one sample layer as the foundation, and use elements of additional samples to enhance and support it. Conventional processing like EQ and compression can be used to separate and define each layer, but these often have undesirable side-effects. M‑S processing offers us another, less messy way to layer things.

In this example we'll layer a mono snare sample with a stereo clap. Mono signals have no Sides component, so you could process and balance any mono sound on its own track, but I still prefer to route them to the same MSED M‑S tracks as I do stereo samples. That way, I can audition mono or stereo samples in a consistent way; it's drag-and-drop simple. Furthermore, I might later decide to apply stereo effects to the mono sample, and this way I'll be able to decide how best to represent these effects in an M‑S layering scenario. These two clips form our starting point.

The processing is similar to previous examples: you mute the Mid of the clap sample, to leave a clear space for the mono (ie. Mid-only) snare. It's oh-so simple, but by combining the Mid of one sample with the Sides of another, you can meld them together tidily without any processing whatsoever — just balance to taste. You can hear the results in these clips.

mono-snare-mid: The dry snare sample bounced from the Mid track.

stereo-clap-sides: The stereo clap with the Mid muted, and no effects or processing.

clap-snare-msed: A balance of the mono snare and the Sides component of the stereo clap.

It already works — but the real beauty of this way of working is that you can apply effects and dynamics processing to either component, and mix and match the levels of the components until the desired result is achieved, without either sound treading on the other.

A reverb that's fed only from the ambient Sides component... spreads its output across the sound stage [so] will give you reverb in both mono and stereo.