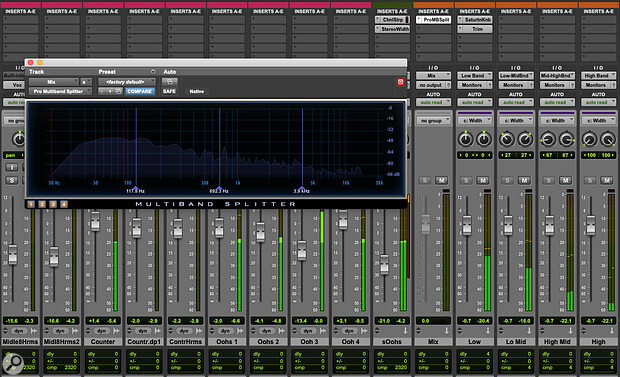 I've always felt the Pro Series plug‑ins from Avid are unsung heroes of the plug‑in world. They're provided to subscribers as part of the Pro Tools bundle, so they are almost ubiquitous, and they provide a definite step up in terms of features and quality compared to the stock plug‑ins. I've spoken about some of these plug‑ins in the past in this column, but one of the most useful is the Pro Multiband Splitter. It's a simple plug‑in — basically the same as the Pro Multiband Dynamics processor, but without the dynamic processing. One thing that many people don't realise about the Pro Multiband Splitter is that you can output each band to a bus and, via that bus, to anywhere else in the mixer. These buses are automatically created and are accessed via the input selector in the plug‑in menu. The Multiband Splitter gives access to these splits and nothing else.

An important point to make about both the Pro Multiband Dynamics and the Pro Multiband Splitter is that the filters used in their crossovers are of the minimum-phase variety. Linear-phase filters have been available for a long time — the first example of a phase-linear multiband compressor I ever used was the Waves Linear Phase Multiband Compressor back in the early 2000s — but the issue with linear-phase filters has always been that to exhibit the phase response that they do, they necessarily incur significant latency. For the majority of applications the sonic differences between a minimum-phase and a linear-phase filter is subtle, but the latency of a linear-phase filter is large, so in most cases, minimum-phase filters are a perfectly acceptable compromise. That being said, the provision of a choice between minimum phase and linear phase filters would be a nice option to have. The FabFilter Pro MB is one of several plug‑ins that come to mind that offer such a choice, but unfortunately it doesn't offer the option to split each band out separately in Pro Tools.

The significance of the phase response of the filters is that the crossover in Pro Multiband Splitter isn't completely transparent, as can be demonstrated if you try to null it against a polarity-inverted parallel path. For most purposes this doesn't matter, but for processing entire mixes it is something to be aware of. It's not necessarily a bad thing but, particularly if it is being used in a parallel application, it will colour the sound just by being there, even before any processing has taken place.

You can output each band to a bus and, via that bus, to anywhere else in the mixer.

So the concept is clear, but why would you want access to these split bands, and are there any caveats to be aware of while using them? The idea of inserting a flanger on the low mids, a reverb on the top end and Auto-Tune on the sub-bass might be original but it's unlikely to be useful. How could this ability to route and process each band separately be used to solve issues we actually experience when mixing? 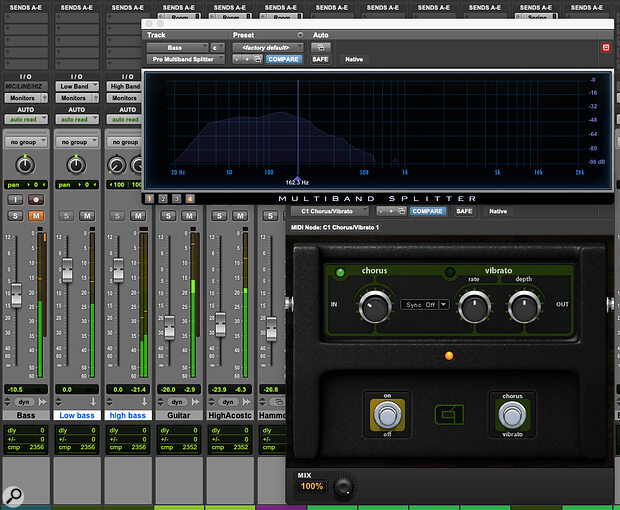 Combining Pro Multiband Splitter with a chorus effect applied only to the upper part of the spectrum yields an effect much loved by '80s bassists.

I won't refer to any compression examples as these might be better served using the Pro Multiband Dynamics plug-in. Though the possibilities presented by using types of compression on different bands — for example an LA-2A on the bass frequencies and an 1176 on the top end — might be interesting, they also sound like a potential nightmare and I'm happy to stick with a dedicated multiband compressor for these applications. If you feel brave then help yourself, but I'll stick with conventional wisdom. The first non-compression example that comes to mind when I think of multiband processing is the bass chorus pedals which I thought were so cool in the '80s, but which subsequently left me wondering what I could have been thinking in the '90s. The setup involves a two-way split from the bass track with a chorus (or a flanger if you want to go extra-gothic) on the high band only. With the crossover frequency set correctly this keeps the modulation away from the fundamental but can add richness and width to the top end — very '80s, just add a fretless and you're there!

You can achieve similar results by high-pass filtering a duplicate bass part and modulating that, but this seems a better way of doing it, since being able to mute and solo the splits independently makes setting the correct crossover frequency much easier.

A subtler application is to use a split to saturate the bottom end of kick drums, basses or anything which has significant deep bass. Any plug‑in which distorts can be used, and one of the fascinating things about distortion is how different the characters of different plug‑ins can be on the same source. Experimentation is definitely recommended here, but of the stock Pro Tools plug‑ins, Avid's Lo-Fi is an obvious contender. Leave the Sample controls alone and experiment with the Grunge section at the bottom. Distort and Saturation have very different personalities so try both. On the kick drum I was experimenting with I found the best results using Softube's free Saturation Knob plug‑in.

These effects can be used in two different ways. Adding harmonics to put some 'fur' on the deep bass frequencies, extending them up into the more audible part of the spectrum, is particularly useful if playback on limited-bandwidth systems is anticipated. And because distortion becomes progressively more pronounced with level, you can also use this technique to emphasise bass transients.

Multiband treatments using time- or gain-based processing are ripe for exploring, but the most consistently useful application I've found is in something far more basic: multiband panning. Many of us have seen 'mono-izer'-style plug‑ins, which vary the width of stereo signals with frequency. For good reason these are almost invariably pushing the top end wider while narrowing the bass frequencies down to mono. This can be achieved quite simply in Pro Tools, with Multiband Splitter offering a convenient way to experiment with the width of sounds or even entire mixes. Here's how to do it: 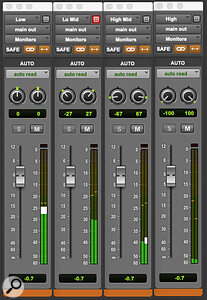 By ticking the Link and Inverse Pan buttons, you can easily experiment with the width of each of your separate frequency bands.You should now have five Aux Input tracks, and by routing stereo audio into Splitter it will output through the four split paths. You can adjust the stereo width of different parts of the spectrum using the channel pan controls. To make this easier, click the tiny fader icon on the right-hand side of the output selector in the Mix window, or in the I/O section of the track headers of the Edit window. This will open the floating fader window, and if you tick both the Link and the Inverse Pan buttons (immediately to the right of the Safe button), then as you turn one pan control the other moves in the opposite direction, making it easy to experiment with adjusting the width of each band.

Having done this I'd recommend saving these five tracks as a track preset so they can be recalled in a single operation with the routing intact. Once this is done, bus your desired signals through this setup and experiment. One interesting area worth investigating is using automated multiband panning to add motion to sustained sounds like pads and atmospheres.

There is a lot more to multiband splits than esoteric processing choices, so try out these ideas and see how you get on.

Another unsung 'utility' plug‑in in the Pro Series is the AudioSuite Loudness Analyzer, which complements the Pro Limiter very well. For anyone working to loudness standards this is a very straightforward problem solver. Since the popular music streaming platforms started using loudness normalisation, LUFS are no longer only relevant to those working in post production and broadcast. If you distribute music online then understanding loudness is something you need to think about. The Loudness Analyzer offers an offline, faster-than-real-time measurement of integrated loudness, as well as peak and loudness range measurements. While more comprehensive third-party tools are available, as someone who works to loudness standards every day I have to say this is all I need.