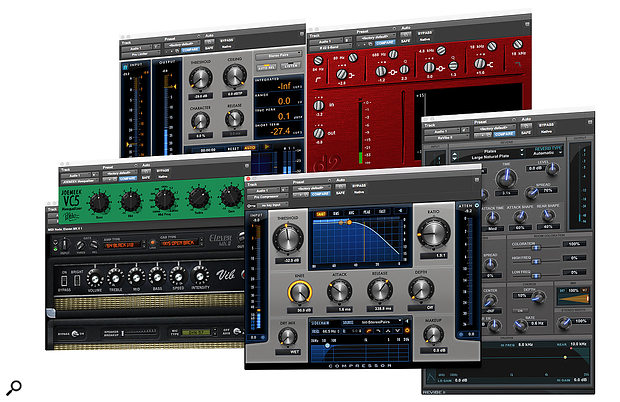 If you're anything like me, you probably enjoy a strange relationship with the contents of your plug-in folder. Of all the new features in Pro Tools 2018.7, the one that had the most impact on my day-to-day use of Pro Tools was the new plug-in search facility. Just click on an insert slot (or send, or I/O slot) and start typing and you'll receive up to 20 search results based on your search string. The ironic thing is that I use the search facility mostly to find one of the 10 plug-ins I use all the time but struggle to find manually because of the couple of hundred other plug-ins I have on my system that I hardly use! Even so, if an interesting new plug-in is announced I still manage to convince myself that I need it.

In a previous article I was singing the praises of the stock seven-band EQIII, which I use in preference to 'better' plug-ins precisely because it is a stock plug-in and, as such, everyone who has Pro Tools has it. The value of stock plug-ins is hard to overstate if you collaborate with other Pro Tools users, and for this reason, when Avid announced that with the release of Pro Tools 2018.4, all Ultimate users with an active subscription and customers on active Software Updates + Support Plans got the Avid Complete Plug-in Bundle, I saw a value over and above the contents of the bundle itself. The fact that everyone with a current Ultimate subscription now has these plug-ins means that the library of what can be considered 'stock' plug-ins has grown substantially.

Avid describe the bundle as containing "more than 75" plug-ins. Many of these have been available to all-comers for a long time, but the new offer includes 33 plug-ins to which non-subscribers wouldn't already have had access. These are a mixture of Avid plug-ins which have been developed in house and the old Bomb Factory plug-ins which were acquired by Avid back in 2004. Since Pro Tools 12.2, active subscribers have had access to the guitar stomp effects and the Avid Space convolution reverb; for those with HD software, Eleven, Revibe II, Reverb One and the Pro Series plug-ins were already bundled.

The ex-Bomb Factory plug-ins, listed in the box, are nearly all emulations of classic studio hardware, and there's no getting away from the fact that, by plug-in standards, they are very long in the tooth. More modern emulations of the same processors from third-party manufacturers are likely to be more accurate, but that doesn't mean these are unusable. For example, many people, including me, still rely on the bundled Bomb Factory SansAmp plug-in, and I'm sure some of the others will prove equally enduring. Their age also means that their processor load is likely to be very manageable on a modern computer.

Turning to Avid's 'in‑house' plug-ins, the Reel Tape Suite frankly shows its age when compared to current offerings from the likes of UAD and Softube. Smack! and the SSL-style Impact are both very usable compressors, though despite its vintage-inspired user interface, I've always found Smack! to lack a little in the character department. There's a decent pair of reverbs in the form of Reverb One and Revibe II, along with the full version of the XForm time-stretch plug-in, the ancient SoundReplacer drum replacement plug-in and finally the full version of the amp‑modelling plug-in Eleven Mark II, now thankfully including bass amp models. For me, though, the star products in this bundle are the wonderful Pro Series of Avid plug-ins, which are comparable in standard to any premium third-party offering. There are five of these: Pro Compressor, Pro Limiter, Pro Expander, Pro Subharmonic and Pro Multiband Compressor.

This collection covers very nearly all of the Avid catalogue. Presumably because of licensing restrictions the Aphex Big Bottom and Aural Exciter plug-ins aren't included, and neither is the Heat console emulation — which is a pity, because it is extremely good.

This bundle adds value to active Ultimate subscriptions, which has to be a good thing, and helps to fulfil Avid's commitment to offer subscribers additional features or extra value regularly throughout the year. There are some hidden gems in the rest of the contents, too — a particular favourite of mine is the BDD delay from the guitar stomps, which is a wonderfully lo-fi delay, just as it should be! It aso gives owners of HD systems access to a greater stock of AAX DSP plug-ins, a welcome thing at a time when more and more third-party plug-in developers are abandoning AAX DSP. For example, Revibe II is a very capable surround-compatible DSP reverb.

As I've already mentioned, the Pro Series plug-ins are the stars of the show. Now that they're available to all, here are some suggestions for some things you might try using them for!

Pro Subharmonic is, as you'd expect, great for beefing up explosions and kick drums, but there's more to it than that. Pro Subharmonic responds to MIDI control, which allows it to be used as a very effective sub-oscillator, either supplementing an existing MIDI performance or by creating a bespoke MIDI track.

The first stage of processing in the Pro Multiband Dynamics plug-in is a crossover, which divides the input signal into a number of processing bands. As an adjunct to the full plug-in, Avid also supply this crossover as a processor in its own right. The Multiband Splitter plug-in lets you split your audio into multiple bands for individual processing on separate auxiliary tracks, allowing you to create your own multiband processes.

The unheralded Pro Multiband Splitter plug-in can be used to create your own multiband processing chains.

Loudness standards used to be something only people working in post-production had to worry about, but since the introduction of loudness normalisation on online streaming platforms, people in music need to measure loudness too. The place to do this is at the end of the mix bus, and thankfully Pro Limiter has all the tools necessary for measuring in LUFS. There's also a complementary loudness analyser plug-in that allows a quick offline measurement, with no need to play the track through to get the statistics. 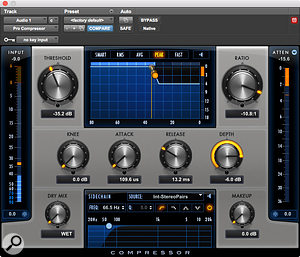 Negative compression in Pro Compressor, one of the few plug-ins that offers this feature.Pro Compressor offers a couple of neat tricks, and a feature that is still rare on dynamics processors of any type: negative compression ratios! These allow you to explore the uncomfortable world of downward compression beyond limiting. It can be confusing at first, but there's nothing difficult about it once you understand that rather than stopping the output from getting any louder beyond the threshold (like a limiter), negative compression actually reduces the output for content that exceeds the threshold, to the point where it is quieter than content that doesn't do so, thus reversing the dynamic variation in the original signal. Once you have a use for it it's pretty simple. Try using negative compression to pull the snare down in drum overhead mics, for instance.

When setting up Pro Compressor or Pro Expander, the attack and release times are of course crucial, and the difference button can be an invaluable aid to getting this right. Click the small yellow speaker icon in the top right of the transfer curve window and you'll hear only the difference between the processed and unprocessed signals. Want to bring out the attack of a bass guitar? Listen in difference mode and wind out the attack time until you no longer hear the attack; your compressor will now let the whole attack through and then pull down the sustained portion of the sound, thereby accentuating the attack.

Finally, the difference between side-chained compression and side-chained ducking doesn't always have real-world consequences, but they aren't the same and Pro Expander offers 'proper' ducking. If you need radio DJ-style ducking, this is where to find it.

As a friend once commented: "Plug-ins are like shoes. You don't need any more, but it's always nice!" Agreed — but rather than running out and buying that new thing you saw, why not look more closely at what you already have?