Reason: Living On A Player Skip to main content

Reason: Living On A Player 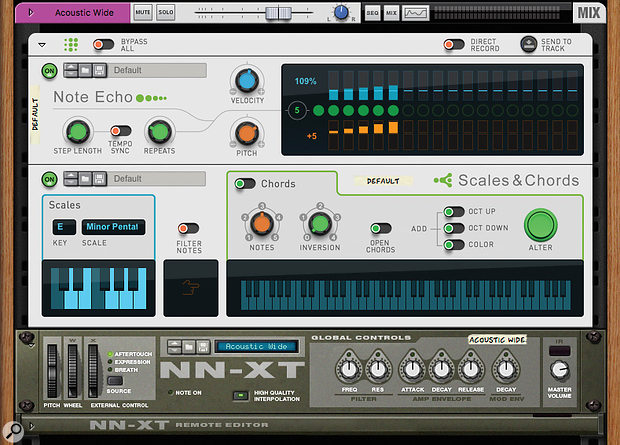 Screen 1. A strum effect from Note Echo being kept in key by the Scales & Chords Player.

This month we return to the new Players in Reason 9, exploring the Note Echo and Scales & Chords devices and some inspiring ways in which they can be combined and stacked. As a quick recap, Players are a new family of Reason devices that manipulate MIDI notes in real time as you (or a sequencer track) play them.

Note Echo offers an inverted take on regular echo effects, and can do things that would be impossible with a traditional audio delay line. This Player repeats MIDI notes, and can alter their pitch and velocity before they reach the instrument they’re patched into. As well as traditional echo and repeat effects, Note Echo can be used to create chords and strums.

Note Echo’s panel is pretty easy to understand. The main display visualises the extra notes that will be generated, with lanes for velocity and pitch. Unlike the Dual Arp that we looked at a couple of months ago, these always follow simple gradients rather than per-note settings. Single knobs set how much the pitch and velocity change from one note to the next, either up or down. The Velocity variant is a percentage value while Pitch rise or fall is set in semitones. Two further controls — Step Length and Repeats — set the time between echoes and the number of extra notes generated for each played note respectively.

This simple set of controls makes Note Echo easy to use, and it doesn’t require any explanation to achieve results similar to a traditional delay, but with more experimentation you’ll discover quite a range of other effects. Because the ‘echoes’ are fresh independent notes, each one continues to respond to other changes made to the sound of the instrument. The velocity component also tends to create dynamic and tonal changes within the echoes. Rhythmic variation can be added by disabling some of the echoes by clicking the green dots between the velocity and pitch lanes, rather like a simple step sequencer.

The default patch on a freshly added Note Echo is an example of a simple strum effect. This uses four repeats set to rise in intervals of five semitones, with a short Step Length time of 43ms. Connect this to a plucked type instrument and give the velocity a slight up-tick and it sounds pretty convincing. By reducing the Step Length down to zero, you can play chords with single keys. On the face of it your chords are rather limited as each step has the same interval. In fact there’s a trick for making more interesting chords: set the number of echoes to a larger amount, and the Pitch to 1 semitone. Now use the green dots to disable all the intervals you don’t need. Notes played using this effect generate parallel chord progressions: all the chords comprise notes with the same intervals. This can sound great for some types of music, and this configuration is also the key to getting classic chiptune sounds. There are clever ways to auto-generate more musically sophisticated chord sequences with the aid of the Scales & Chords Player...

The Scales & Chords Player is, as its name suggests, two different processes linked together. The Scales part is used to restrict note inputs to a chosen key and mode. This is very straightforward to use: you simply choose the key from the pop-up selectors, then decide whether notes will be ‘filtered’ or not. With filtering enabled, any notes that fall outside your chosen scale are ignored. When filtering is disabled, notes that are out of key are moved to the nearest note in the scale. A piano key graphic under the scale selector highlights which notes are active in the current scale. Unfortunately there isn’t a way to map the scale to all the white keys (or maybe black keys for pentatonics); in some scales playing all the whites with filtering off will result in the same note playing twice, but at least you’ll always be in key! 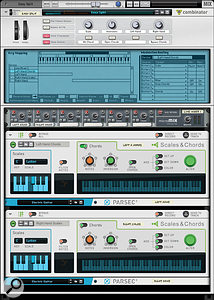 Screen 2. My split patch for automagically playing chords and melodies in key.The Chords side is devoted to generating chords from single notes. The primary control here is the Notes knob, which selects the base number of notes that make up each chord. All the other controls offer different ways of creating variations and additional flavours in the chords. Importantly, and in contrast to the Note Echo, the chords are diatonic, conforming to the key set in the Scales module. The Inversion control creates different variations of chords by juggling the note orders. The Open Chords switch creates chords with a wider note range, like you’d get on a guitar. The Add Oct Up and Add Oct Down switches are self-explanatory, while Add Color creates add 9, add 11, or add 13 chords depending on the initial number of notes. The Alter button creates a momentary variation outside of your chosen key, so might switch between major and minor, for example.

Scales & Chord can also be used to constrain notes from other Player devices to a scale. For example in Screen 1 (above), the Note Echo is producing a strum effect. These ‘strummed’ parallel chords then pass through the Scales process where the individual notes are adjusted to stay within the chosen key. Playing a sequence of notes through this chain results in a strummed, diatonic chord progression. Of course this doesn’t have to be a strum, it could be straightforward chords, or you could have rising or falling echoes that stay in key. A nice trick is to use Note Echo to generate a series of single note echoes rising in pitch, and run them through the Chords generator. The echoes are transformed into a series of chords in your chosen key. This can be a really pleasing effect, especially with some dynamic velocity changes.

Whole new sets of possibilities present themselves when you change the order of your Players. In Screen 2 I’ve put the Chord generator in front of the Note Echo to get echoed chords. I’ve set the echoes to rise in pitch, so I’ve set a second Scales & Chords device at the end of the chain to force the echoes into the same key.

Some of the most fun I’ve had with the Scales & Chords Player is with ‘split’ patches I’ve created that let me play musically coherent chord progressions with my left hand and scale-restrained melodies with my right. This was not that straightforward, as it’s not a feature built into the Player, but the beauty of Reason is you can usually figure out how to do stuff like this using a Combinator. My patch is shown in Screen 3. Let’s have a look at how it works... 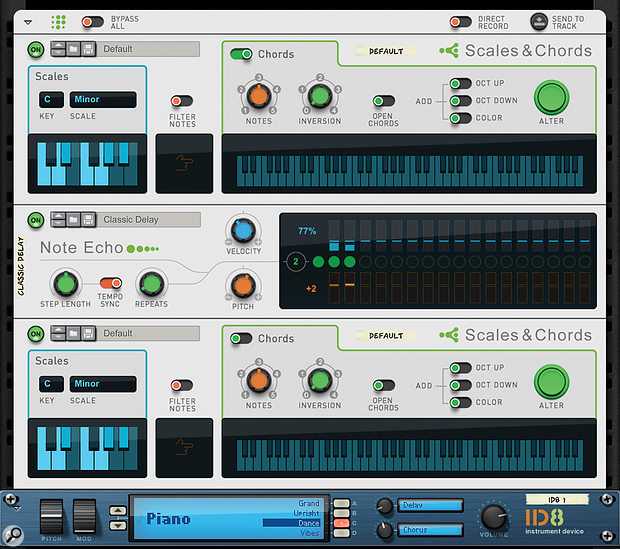 I started with a Scales & Chords Player connected to the Parsec 2 synth, on which I tweaked an Electric Guitar patch to get a warm Rhodes-like sound. I set up the Player to generate simple chords in my chosen scale. I then right-clicked on the synth and chose Combine, which placed it with its Player into a Combinator device. Next I duplicated the two devices to create the right-hand part. On this new Player I turned off the Chord section, and made sure Filter Notes was off, allowing me to bash out in-key melodies without the requisite talent.

Keyboard splits are created in Combinator’s Programmer panel by selecting instruments in the list and editing their input range. In this case I set the second (right-hand) Parsec to respond only to notes from C3 upwards, and set the second Parsec’s range to all the keys below that. At this point I needed to do some audio patching to be able to hear both synths because the first one had auto-patched itself into the Combi. I dropped a Line Mixer into the top of the Combi stack and used it to mix both synths to the Combi’s audio path. At this point I had a working split patch, with easy chords on the left and melodies to the right. I decided to add some finesse using the Combi front-panel controls. I mapped the first macro knob to the Scale selector on both the Players, and reduced the range slightly so that the Custom and Chromatic options couldn’t be selected. I also added some level trims and some of the other controls from the Players.

Next time you find yourself lacking inspiration, maybe try noodling around with these Players and experimenting with some of these combinations. Not only is it strangely satisfying (especially if, like me, you’re far from a musical prodigy), it’s surprising how many song ideas they can generate.