We help you to bring your old Reason songs into the Record era. 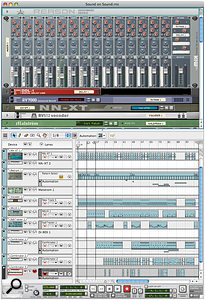 It's something of a new dawn for Reason users, as Propellerhead's fully fledged music production package Record is now out. If you've not been following developments, you can get up to speed by reading the review in last month's SOS.

The first question facing most of us who've added Record to our Reason setup is what to do with existing Reason songs. First, a little background. Record without Reason offers audio recording, some basic instruments, a superior mixer, and the same effects found in Reason — all in a Rack‑based environment that works in almost exactly the same way as Reason. Reason can be added to this package to provide its extensive range of instruments.

The main thing to get your head around is the way in which Reason integrates with Record. Rather than running both applications and linking them by Rewire (as you would when using Reason with any other DAW), all of Reason's devices actually appear inside Record if you have Reason installed. You don't need to run Reason at all: just have Reason activated on the same account as Record.

The Song Remains The Same 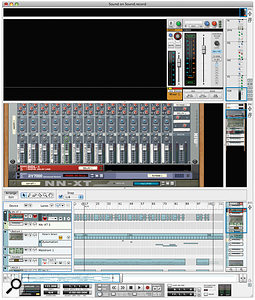 Record can open Reason songs directly, provided that you have an activated copy of Record (if you are in Demo mode, you can't open songs). If you open a .rsn file in Record and hit Play, you'll hear what sounds just like your old song in Reason. Great, we're done here... except there's actually a bit more to be said about it, and a lot more you can do to get your existing project to benefit from Record.

Take a look at the screens above. These show the same Reason song file opened in Record (left), then Reason. The Sequencer at the bottom looks very much the same, and retains all the details of your song. The section in the middle is the rack, and contains all the devices and cabling from your Reason song. If you had anything happening in Regroove in Reason, it is retained, as Record also features the Regroove mixer. The real difference (other than the fact that you can now add audio tracks to your song) is the Main Mixer at the top of the screen.

Notice that the rack area has retained the mixer from Reason. Reason's mixer (the 'Remix 14:2') exists as a device in Record, but is separate from the new Main Mixer. Just like Reason, Record has a Hardware Interface device which allows you to cable signals from the rack to physical outputs (the big difference from Reason, of course, is that this also has inputs). If you were to plug the main 14:2 mixer from your Reason song into this device, you'd essentially be in exactly the same situation as you were in Reason.

However, by default your main Reason mixer is routed to Record's Main Mixer, via a stereo channel. To bring the full benefit of Record to your song, you need to forget about the old 14:2 Reason mixer, and re‑route all your instruments through separate channels in this vastly superior mixer. That is what we'll spend the rest of this article doing.

Before proceeding, it's important to understand how Record's mixer hooks into the rack. Unlike all previous Reason devices, the mixer doesn't exist as a single, fixed‑format object that you can cable things into. As in other DAWs, the Main Mixer view is a separate entity from the rack, with mixer channels that are created as required. However, connections to and from the mixer do appear in the rack in modular form. Each input channel has its own rack device, where connections can be made to other devices. The Master section of the mixer also has a Rack device. 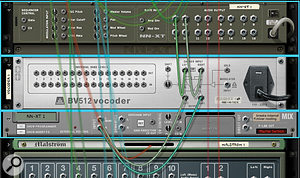 Each channel in the new mixer has its own rack device where connections are made.

Unfortunately there's no automatic way to reconnect all your instruments from the old mixer to the new one, so it must be done manually. In our example, the first instrument in the Reason song appears as 'Vocoder' in the 14:2 mixer. This is a pad from a NNXT sampler, routed through a Vocoder. To route this to the new mixer we first need to make a new mixer channel. Right‑click on the Vocoder, and choose Create / Mix Channel. A new channel will appear in the mixer pane, and an associated rack object will be created under the vocoder. (Keeping these channel racks next to their sources keeps the cabling tidier round the back).

At the back of the rack, the vocoder is connected to input 1 on the old 14:2 mixer. In the screen above I've reconnected to the stereo inputs on the new mix channel, and the pad now appears in Record's mixer, as you can see in the screen below. Did you notice two cool Record features? Firstly, the naming of the mixer channel is handled more intelligently: it's automatically given the name of the source instrument instead of the effect that is in between them. Secondly, the new Reduce Cable Clutter mode dims cables not associated with the selected devices. 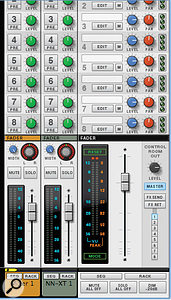 Using the above method you can re‑route all your instruments through the main mixer, but you'll have lost your balance and any send effects. The fader levels can be reset easily enough, although there's no simple way to get exactly the same values because the old mixer used a value scale of 0‑127, while the new grown‑up mixer uses decibels. As a reference the 0dB point on the old mixer is 100. Likewise, pan was measured as ‑64 to +63, but is now displayed as ‑100 to +100. If you used the EQ controls on the 14:2 mixer, these will need to be recreated using the new channel EQ — which is like going from sitting on a bucket to an expensive leather armchair.

Disconnecting from Reason's mixer will mean you've probably lost some reverb and delay effects that you'd set up on sends. In the example project, there was a RV7000 reverb on send 1, which was being used by several channels, including the pad we reconnected. This reverb needs to be connected to the new mixer, and this is done by simply dragging cables that connect the reverb to the old mixer's Aux section up to the FX Send and FX Return jacks on the Master Section.

To add some of this reverb to a channel, you have to activate the corresponding send by clicking its button and then setting the right level. The sends default to ‑12dB, so you'll hear something as soon as you press the button.

Sends must be activated in the Record mixer.

Things get slightly more complicated if you had automated any mixer parameters in the Reason song. Unfortunately, with the exception of mutes, you can't simply copy the old automation to the new mixer, because the parameters do not have compatible data ranges (the new mixer uses much higher resolution). If you do want to copy across mute automation, you'll need to right‑click on the appropriate channel's rack objects, and choose Create Track for 'channel name'. Then right‑click the new sequencer track for the channel and choose Parameter Automation... From the list, enable Mutes. You will now be able to copy mute automation from the old mixer's sequencer track to the new track. Use Alt+Shift to copy and drag automation clips while restraining horizontal motion.

For all other mixer parameters you will either need to recreate the automation, or leave a copy of the old mixer in the signal path. Although this might be a temporary nuisance, the rewards you'll get from the brilliant EQ, Dynamics and Bus Compressor in the Record mixer mean it's well worth making the move.

What if you only want to use part of a Reason song in Record? For example, you might have a particular group of devices and tracks in a Reason song that you want to bring into a Record project. You can't open Reason at the same time as Record, so it's not as simple as copying and pasting things across. No problem: open the Reason song in Record (you can have multiple Record projects open at once) and copy across what you need. If it's just a configuration of devices you want to import, an elegant solution is to save the devices into a Combinator patch in Reason, then open that patch in Record.