As well as the PX64 percussion strip we covered in last month's workshop, Sonar 8.5 comes with the VX64 vocal‑processing strip. You might feel that the new addition is redundant, given that Sonar already has the VC64 Vintage Channel and the Sonitus plug‑ins, but actually the VX64 is a highly convenient way to take care of most vocal-processing needs with a single plug‑in. But first…

'Prepping' a vocal with DSP before processing can make that processing more effective. For example, suppose you want to compress your vocal. If there are significant level variations, you may end up adding lots of compression to accommodate quiet parts, only to find that when loud parts kick in, the compression starts pumping. The easiest fix is to Alt‑drag in the timeline above areas where the vocal level suddenly becomes quite loud, then go Process / Audio Gain and drop the level by a dB or two. This leaves the compressor with an easier job to do, allowing it to work more transparently.

This peak is considerably louder than the rest of the vocal, but reducing it by a few dB will bring it into line.

Here's another example. A lot of people use low‑cut filters to banish rogue plosives (loud 'p's or 'b's). However, it's often better to add a fade‑in to get rid of the plosive; this retains some of the plosive sound and avoids affecting frequency response. 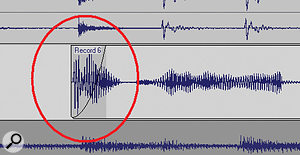 Adding a fade‑in to a plosive can get rid of the problem area while leaving the vocal timbre unaffected.

This is also a good time to cut out silences, then add fade‑outs into silence and fade‑ins up from silence. Do this with the vocal solo'ed, so you can hear any little issues that might come back to haunt you later. Also, sometimes it's a good idea to normalise individual vocal clips up to –3dB or so (leave some headroom), so that the compressor sees a more consistent signal.

With DSP processing, it's good practice to work on a copy of the vocal, and make the changes permanent as you do them. The simplest way to apply the changes is simply to select the clip, then go Edit / Bounce to Clip(s). When all the clips have been prepped and (if necessary) normalised, you can select and bounce all of them into a single clip, if you find it easier to deal with a single track rather than multiple clips.

The VX64 vocal strip has a De‑esser, Compressor/Expander, 'Tube' Equaliser, Doubler, Delay and Saturation processor. (The Doubler, my favourite VX64 component, is a stereo effect, so for vocal tracks recorded in mono, click on the track's Interleave button and select Stereo if you plan to use the Doubler.)

The VX64, re‑skinned in blue. The graph toward the right provides details for whatever control you're editing. Having prepped the track, it's time to put the VX64's facilities to use. I usually do dynamics first, then de‑essing, EQ and, finally, anything else. Then I re‑tweak if necessary.

Almost every vocal you hear has compression on it. My ideal is a vocal that's compressed quite a bit, but doesn't sound it (the DSP 'prep' work helps in this respect). Assuming that your vocal is a nominal –3dB below 0dB, set the Threshold to around –15dB. (If you're hitting 0dB, you might want to reconsider, as you could be creating inter‑sample distortion.) The top field of the big graph towards the right of the VX64 interface shows precise parameter values. Increase the Ratio from 1:1 upwards until you find the 'sweet spot' where the vocal sounds much more consistent, but still natural, and lacks any kind of pumping or artifacts (unless, of course, that's what you want). For natural‑sounding vocals, the ratio is usually no more than 4:1, while for rock/pop vocals it's 10:1 and sometimes more. The Attack control has a huge effect on vocals. With very short attacks (under 0.5ms), the clamp‑down on signal dynamics is instantaneous, while attacks of 1ms and above let through some of the dynamics, which give the vocal more life. Bear in mind that after adjustment you may need to go back and re‑tweak these controls, as they all interact.

The Compander also includes an Expander section. This is useful mostly for getting rid of mic‑preamp hiss, mic handling noise, and other low‑level signals. If you already took care of this during DSP preparation, you probably won't need the Expander. To disable it, set the Threshold to –90dB and the Ratio to 1:1.0. If you do need to get rid of low‑level noise, try a Ratio of 1:10. Turn the threshold up just until there's no noise in the space between vocals; it's helpful to find a space like that and loop it to make adjustments easier.

By the way, the De‑esser does more than take care of high‑frequency sounds. On one song I was mixing, there was an over‑loud "shh” sound that didn't reach particularly high frequencies. But the De‑esser (set to its lowest frequency) was able to reduce it. The easiest way to optimise the De‑esser is to turn on the Listen switch (up position), so you can hear what's being removed by the De‑esser, turn the Depth control up full, then sweep the Frequency until you hear the sound you want to minimise. Finally, turn off Listen. Bear in mind that even a little bit of de‑essing can sound like too much when the full vocal is playing back, and you may need to pull back on the Depth control if that's the case.

The VX64 includes a twist on EQ, in that you can saturate any of the three bands to add a sort of 'exciter' effect.

Vocals often need a fair amount of upper mid‑range boost, especially if recorded with a dynamic mic. For this, use the middle band set to between 2kHz and 4kHz, and be generous with the boost, adding perhaps as much as 4‑6dB. Think of the high shelf as adding 'air' and use the low shelf to either cut bass if the vocals sound muffled or add bass if the vocals lack depth or warmth.

Once the EQ is set, consider adding extra sparkle with a tiny amount of saturation. I leave the input and output Saturators all the way down, because I usually don't like ultra‑distorted vocals. But the EQ saturation is something else. There's a switch for each band that enables saturation for that band, and a global Saturation slider for the three bands. What works for me is applying saturation only to the highest band, and turning up the Saturation fader until the little tube icon barely glows on peaks. The extra sheen can be a subtle, but audible, improvement. 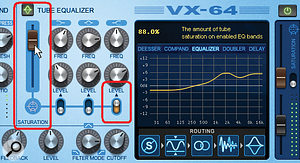 The switch that enables saturation for the equaliser's high shelf is enabled. Note that the Saturation slider may seem very high, but because it's restricted to only the higher frequencies, it adds a very subtle effect.

Now that the vocal sounds solid, let's put on the audio equivalent of make‑up.

If you like to double your vocals, you'll love the Doubler. The Presence control mixes in the doubled line, while the Stereo control changes the doubling's width. You can reinforce your voice without necessarily having it sound doubled by turning the Stereo knob fully counter‑clockwise, then bringing up Presence just enough to add fullness. On the other hand, if you want to sound like a trio of voices, turn Stereo fully clockwise and add a lot of Presence. Remember, you need to set your vocal track to stereo for the Doubler to work properly.

The Delay is fairly standard, offering Delay, Feedback and Level controls, with Delay syncable to tempo. The interesting thing here is that you can filter the echo with a morphable filter (from low‑pass, through band‑pass to high‑pass, with variable cutoff frequency). The high‑pass response is excellent for adding an ethereal quality, while a mid‑range band‑pass filter sounds more like an old tape echo. I haven't found much use for echoing only the bass, but someone will probably figure out some amazing application for it!

Like the PX64, you can change the order of effects in the VX64 just by dragging their little icons at the lower right. Try the De‑esser in various locations to determine which does the best job (usually it's the first slot, but experiment). Try EQ both before and after compression. Generally, I get the best results by placing the Doubler and Delay last. Remember to re‑tweak if needed, and when you get something you like, save it as a preset.