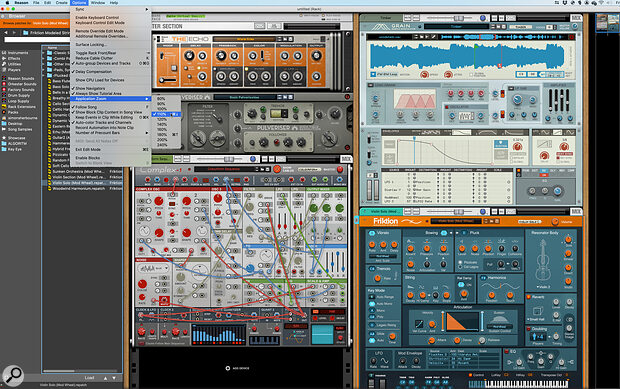 Reason has been in need of a fresh lick of paint for a while now. The Reason Rack was by far the most visually appealing place to make music on a computer, but it has long been constrained within a graphical framework built when a high‑end laptop might have a 1024x768 display. The fixed size, and the lack of support for high pixel density (UHD or ‘retina’) displays, has left the Rack looking a bit on the fuzzy or small side compared with newer plug‑ins sporting high‑resolution, scalable UIs.

It was welcome news then when Reason Studios revealed that they were working on Reason 12, and that high‑resolution graphics would be one of the key new features. The full Reason 12 launch is scheduled for September 2021, but Reason+ subscribers have just been granted an early release (mid‑June as I write) with the updated graphics. It’s oft‑cited by software companies that subscription allows for more frequent releases, without the traditional need to save up a bunch of features to justify an upgrade price. This is the first time I’ve seen a developer split releases, with subscribers getting an incremental update while license owners wait for a multi‑feature upgrade. It will be interesting to see how it’s received.

To get the update you’ll need a current Reason+ subscription and the latest version of Reason Companion. Go to ‘Install Reason’ in the left‑hand column (Screen 1) and click to download Reason 12. You’ll need to run the installer manually from the Downloads folder. When you’re done, restart Companion and select ‘Devices’. Choose ‘Sync All’ from the top of your Reason and Third Party Rack Extension lists. Finally, click the link next to this that says ‘Upgrade Installed Devices to hi‑res’.

Reason 12’s graphics overhaul actually comprises two complimentary features: something that’s caused a certain amount of confusion, which we can tackle here. First there’s higher‑resolution graphics, which makes Reason and its Rack devices much sharper and more detailed on high pixel density displays. Then there’s Application Zoom, which lets you scale Reason as a whole, so you can optimise its size on‑screen independently from the current display resolution.

If you’re on a Mac with its own ‘retina’ display, for example a MacBook Pro or an iMac, or if you’ve got your Mac or PC set up with an external UHD monitor, then Reason will start up looking the same size as before on your screen, but appearing much sharper. (In fact the devices have also had a general touch‑up, with some improved colouring, texture and lighting.) If you’re using a standard resolution display you won’t see any difference when you first load up Reason, but you would feel some benefit of the increased resolution if you zoomed in. But we’ll come back to that. 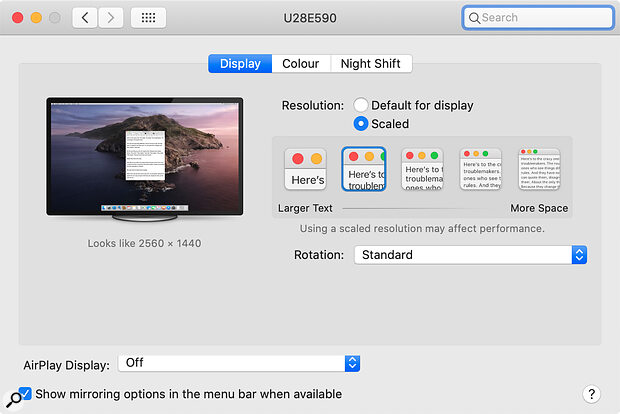 Screen 2: Choosing a resolution in the Mac Display Settings determines the default size of apps on the screen.

It’s worth a digression to look at how Mac OS and Windows 10 handle UHD displays: it should help the Application Zoom function make more sense, and it’s useful lore anyway. On the Mac, the Displays panel in Settings (Screen 2) gives you two main options for Resolution: ‘Default for Display’, or ‘Scaled’. With Scaled selected, you can choose from a limited range of settings, but if you Option‑click Scaled you’ll get a list of all resolutions supported by your display. A further tickbox lets you view ‘Low Resolution’ modes as well.

The Mac labels screen resolutions in ‘old money’. To see what I mean, hover over one of the Scale options in the standard display settings view and it will say 'Looks like 1920x1080' or 'Looks like 2560x1440'. This means that the OS and retina‑capable apps will be displayed at the size you would have seen them on a standard‑resolution display with those pixel dimensions. The system and high‑res‑enabled apps will in fact be using all the screen’s pixels to look much crisper. 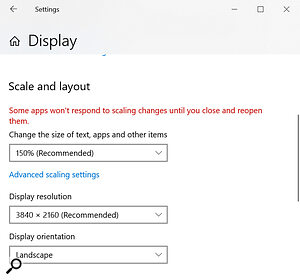 Screen 3: In Windows 10, the default size of apps is scaled relative to the resolution.Windows achieves the same end by a different route: you set an absolute screen resolution, typically the maximum your screen is capable of, then set how much the OS and UHD‑aware apps are scaled (Screen 3). For example, my 27‑inch 4K display has a resolution of 3840x2160, which is what I keep it set to in the Windows 10 Display Settings. With this set, the Windows Application Scaling setting shows a recommended setting of 150 percent, meaning that the OS and Apps will zoom to a comfortable size instead of appearing tiny on the screen. In other words you set your desired balance of screen real estate versus readability by adjusting Scaling rather than the nominal resolution.

Anyhow, this long‑winded explanation hopefully makes it clear what the Application Zoom setting is primarily intended for: letting you choose the size that Reason appears relative to the general scaling of your OS. It’s pretty common to see this facility in modern plug‑ins, and of course the Reason Rack Plug‑in benefits directly from this. It’s less common to see a whole app be scalable...

...Which is probably where some confusion has come in. Some users assumed that the scaling would be something focused on the Rack, giving you a way to zoom in on devices while you are using them. It’s not really. If you zoom in to get a really close look at the Rack devices, you’re also putting the Browser, Mixer and Sequencer into jumbo vision mode. 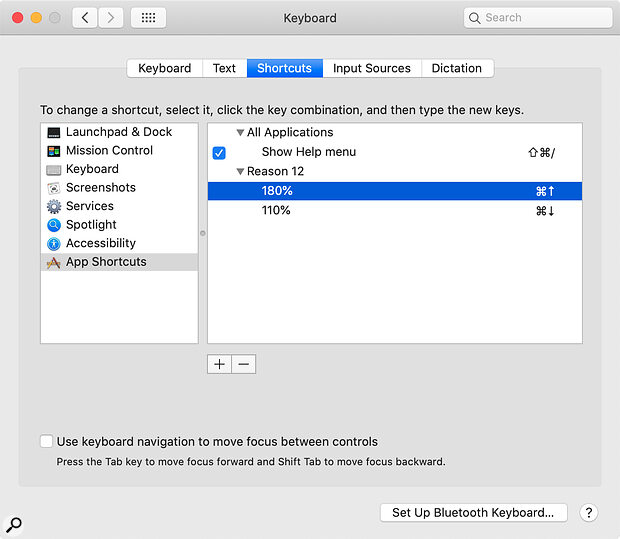 Screen 4: On the Mac, you can assign keyboard shortcuts to zoom settings if you want to change on the fly.

I think/hope Reason Studios probably will implement a dynamic Rack zoom feature at some point. In the meantime, I’ve set up my Mac system with a couple of custom keyboard shortcuts, which let me toggle between two zoom states in the standalone app (Screen 4). The Mac lets you do this in the Keyboard panel in System Preferences. Click the Shortcuts tab then select app Shortcuts from the bottom of the list on the left. Click the ‘+’ button to add a new Shortcut. In the window that pops up, change the top option from All Applications to Reason 12. Now type in the zoom setting as it appears in the menu in Reason, for example ‘180%’. Finally, assign a keyboard shortcut that’s not already used by Reason.

I’ve set up two zoom levels: 110 percent, which is the comfortable size for general working and navigation in Reason at the resolution I’ve set my 4K display; and 180 percent, which lets you focus in on a single instrument panel if you’re spending some time playing and programming. I generally work with the Rack window separated and the Transport hidden, so this works out pretty nicely.

HD graphics ticks off my number‑one feature request and has rekindled my love for the Rack.

As a cute Easter egg, the Redrum drum machine now has an animated cooling fan on the rear panel. Fear not, though, this is not eating your precious CPU cycles: Reason’s graphic system has been overhauled across the board and now uses your computer’s GPU to share out the work. Hopefully all this engineering work behind the scenes sets up Reason for more cool visual features in the future.

Speaking of which, Reason Studios are teasing lots of new goodies to come, with a new Sampler being the next thing we’ll see. In the meantime, HD graphics ticks off my number‑one feature request and has rekindled my love for the Rack.

As you’d expect, all the built‑in Reason devices support the new high‑resolution Rack, as do all the Reason Studios premium instruments. But what about third‑party Rack Extensions and Plug‑ins?

Plug‑ins are not a problem, they already run inside a dedicated plug‑in hosting device and are drawn with whatever detail they are designed with. It’s also good news for third‑party Rack Extensions. From the outset, the Rack Extension format required that devices be built with high‑resolution graphics (in fact 3D models were encouraged as well). So all your third‑party Reason Rack Extension devices will also look shiny and new in Reason 12.