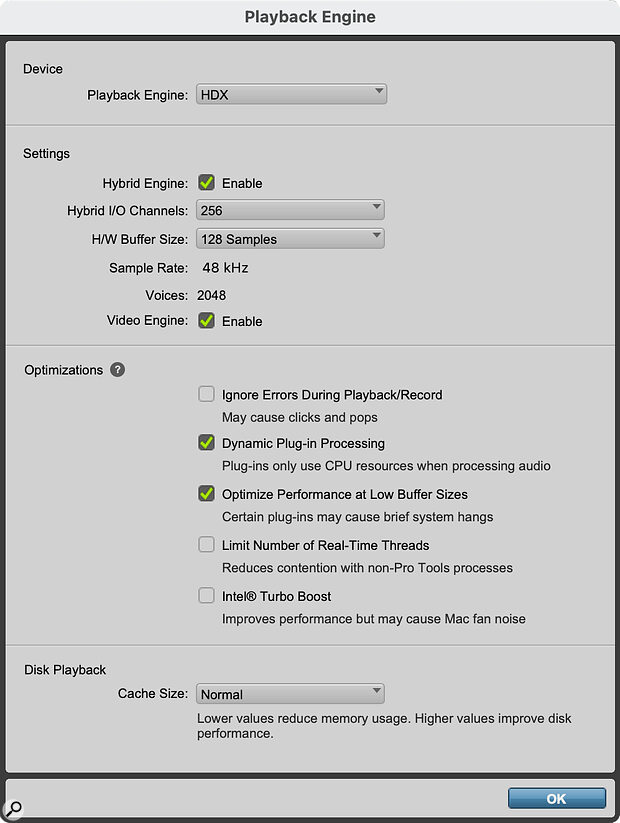 The option to disable the Hybrid Engine may come in handy if you use native plug‑ins that don’t have a DSP equivalent.

The newest version of Pro Tools offers much for both native and HDX users.

It wouldn’t be going too far to describe Pro Tools 2021.6 as a seismic release. It isn’t about a flashy new set of instruments or the like, it’s about extending the relevance of HDX for years to come. The Hybrid Engine, which gives HDX users a massive increase to 2048 voices, is of course the biggest news. Some users, particularly those using HDX systems to run big Dolby Atmos sessions, were finding voice limits to be a problem even for the most powerful systems, and the HDX Hybrid Engine has lifted the lid off these restrictions.

The general performance gains in terms of the responsiveness of systems is as welcome as it was unexpected. Avid have described the reasons for this boost in the snappiness of systems running the HDX Hybrid Engine as mysterious — maybe they were as surprised as us! It is my understanding that the Hybrid Engine, originally developed for Pro Tools Carbon as a way to get seamless shared performance between the limited DSP available on Pro Tools Carbon and the native processing available on the host computer, was subject to something of a eureka moment when Avid realised it could also be implemented for the far larger group of HDX users. Applying this free fix to an already installed user base of heavily invested users was a masterstroke which means, for example, that HDX3 systems gain over 2.5 times as many tracks as they had before. But the situation is even better value for users of HDX1 systems, who get over five times as many tracks.

While the HDX Hybrid Engine had been widely known about for some time prior to its release, other new features came as a surprise. For example, track counts have increased for users of standard Pro Tools software, and Avid have also simplified track counts for non‑Ultimate Pro Tools users — so, instead of dealing with a total number voices and having to halve that number for stereo tracks, standard Pro Tools users now get 256 audio tracks, whether mono or stereo.

But the big news for software‑only Pro Tools users is that the unpopular restriction of 32 available inputs and outputs, which has been in place for many years now, has been doubled to 64. So while software‑only users still have to contend with the latency issues common to all native DAWs, the doubling of potential I/O puts larger projects and setups within reach of non‑HDX customers. I can see some large tracking studios, as well as people who have been stuck between using software‑only Pro Tools and an analogue console, reconsidering their options in light of the new I/O cap.

While the conventional wisdom for professional users is to hold off OS upgrades until all the applications and plug‑ins you use are supported, not all users have the luxury of planning their migration to new operating systems. Computers break and need replacing, and for Mac users there is the additional complication of the shift to Apple Silicon. The good news there is that Pro Tools 2021.6 is qualified for use on M1 Macs, via Rosetta 2. The performance gains seen by M1 users, combined with the expected release of higher‑spec Apple Silicon computers, must surely mean that the recent performance boosts can only increase further when Pro Tools finally runs natively on Apple Silicon.

Pro Tools 2021.6’s Color Palette has had a big upgrade. 2020.11 introduced the Dark Theme, which was popular with many because it was more in line with the look of other popular DAWs. On a more practical point it was welcomed by post‑production users who work in dark rooms with projectors. One annoyance was that making the switch from Classic to Dark Themes necessitated restarting Pro Tools, but as of version 2021.6, Themes can be toggled freely from the Color Palette without restarting. 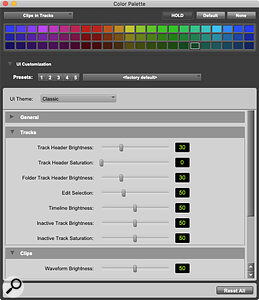 The GUI can now be extensively customised.There is also now a huge number of customisable parameters, which can be saved as presets. After the initial shock of the Dark Theme (I really did find it surprisingly difficult to use at first), I have now settled into it, and while there aren’t many things I feel need changing, I have found the ability to make Folder Tracks stand out more in the Mix window very useful, and have toned down the intensity of the yellow lines that run down the Edit window under Markers, which I’ve always felt drew more attention to themselves than was necessary. I’m sure you’ll find your own tweaks, but the inclusion of a Reset All button means that if you are on someone else’s system and their choices are too far from your own for comfort, it is simple to get back to the default settings.

It is possible for HDX users to disable the Hybrid Engine via a new tick box in the Playback Engine dialogue, and there are some specific situations where this might be desirable, such as when using native plug‑ins that don’t have DSP equivalents. Because it is no longer possible to mix AAX Native and AAX DSP plug‑ins in the same track (a deliberate move in order to preserve the low‑latency performance of DSP mode), when you engage the Hybrid Engine, some plug‑ins for which there aren’t DSP equivalents will not be available. Interestingly, at the time of writing, Avid Space (which is available as an AAX DSP plug‑in), isn’t available in DSP mode when using the Hybrid Engine. This may be because it offloads some of its processing to the CPU, even when running in its DSP guise.

Switching a stereo track to mono and vice versa has never been easy in Pro Tools. Other DAWs have dedicated switches for this, and while Pro Tools isn’t quite there yet, in version 2021.6 there is now a right‑click set of channel width options. Right‑click on the track name and you will see a Change Track Width menu; clicking on that offers a list of all available widths in your version of Pro Tools. In Pro Tools Ultimate that is a choice of 13 by default (more on this later), ranging from Mono to 3rd Order Ambisonics. If you try this you will quickly find occasions where this option is greyed out. This is because Change Track Width is only available on tracks that contain no clips — it is changing the mixer architecture, and doesn’t reprocess any audio on that track (though I have noticed that in Instrument Tracks with active MIDI clips, the Change Track Width option is also greyed out). 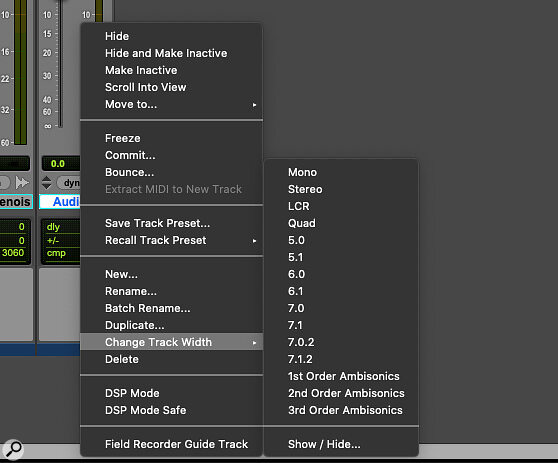 The new track‑width options make it easy to switch a track between mono and stereo, and are also where you can select a range of multichannel formats.

There are also show/hide options in this menu, which allow you to restrict the visible channel‑width options. Earlier I said the default number of channel widths in Pro Tools Ultimate was 13, but actually the total on offer is 18, it’s just that some of the choices are restricted by default. By checking or un‑checking items on this menu you can streamline the drop‑down menu, and your choices will also be reflected in the New Track dialogue, which is handy if you are an Ultimate user who only works in stereo, for example.

Something that will benefit all users is the ability to Option‑drag plug‑ins between tracks of different channel widths freely, as long as a version of the plug‑in exists in the new channel width. This isn’t going to affect duplications between mono or stereo tracks, but not all plug‑ins are available in all surround formats.

So 2021.6 is a case of winners with no losers. Some users win more than others, for example HDX1 users come out on top with massively improved systems whereas HDX3 users may end up seeing their expensive DSP resources sitting idle. Native users gain doubled I/O and track counts, and anyone who wants to create headache‑inducingly bright custom UI presets is now free to do so if they wish!