Go beyond the pan pot with Logic’s Direction Mixer.

Ever since Alan Blumlein demonstrated his stereo recording techniques in the 1930s, engineers have been able to take advantage of our innate ability to locate sounds in a physical space in order to separate out sources and create movement within a mix. Logic Pro has several tools available to manipulate audio in this stereo space, and a few more that should help engineers exploit the potential offered by the three‑dimensional sonic world to come. I’m assuming for this workshop that you have Surround Sound selected in Logic Pro’s Advanced Preferences pane, otherwise some of the options mentioned here will be unavailable. 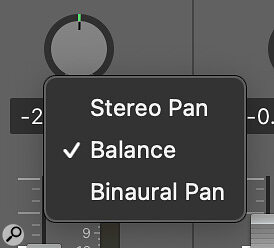 The Pan control options available by right-clicking.The most obvious tool for moving sound around in a mix is the pan pot. With a mono track, this simply moves the source of the sound across the stereo field. But if you have a stereo track, things are a little more complicated. Right‑clicking on a pan pot reveals several extra available panning options.

Balance is the default mode, and this progressively lowers the level of the channel opposite to the direction in which you are moving the control, until it is completely muted. This may or may not be what you are after though, as it can significantly change the sound of some stereo sources. In the Stereo Pan mode, moving the control changes the apparent centre position of the stereo field — and if you grab the little white squares at the end of the green line, you can also narrow it as well. I find this really useful for use with instruments that need to remain in stereo when panned, such as a Hammond organ played through a Leslie cabinet, as I can place the instrument off‑centre and narrow the spread but not lose that important sense of movement.

While changing the stereo pan using the little handles on the pan pot is intuitive, I find it quite hard to adjust with any precision. As is often the case with Logic Pro, there is another way to perform the same task — in this case, it’s called the Direction Mixer. 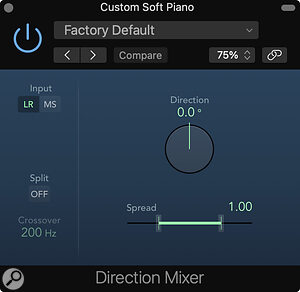 The Direction Mixer not only allows for panning, but also has advanced stereo‑balance options, as well as adjustable stereo width.When in LR mode, the Direction Mixer plug‑in mimics the pan pot’s Stereo Pan mode. The Direction knob sets the centre of the stereo image (values above 90 swap the left and right channels), while the Spread bar changes the width of the stereo field. A value of 1 is full width, 0 is mono, and you can widen the stereo image beyond the full range of the pan pot with values greater than 1. This works better on some sources than others, but it can be useful as an effect. 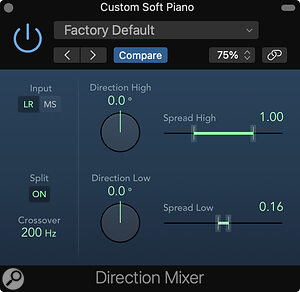 Using the Direction Mixer’s frequency splitting mode.If you select the Split mode, you can independently adjust the stereo spread of two different frequency ranges, as defined by the crossover setting. I’ve been working with a drummer who has been using the Glyn Johns recording technique and, while I do have a separate bass drum recording, the low end is seriously off to the left in the two kit microphones. Using the Direction Mixer I can mono‑sum all frequencies under 200Hz, effectively pulling the low frequencies (and thus the bass drum) into the centre. It’s also useful to be able to widen or narrow the higher frequencies in the kit.

You can also process Mid‑Sides recordings using the Direction Mixer. You need to make sure your Mid mic is the ‘left’ channel and the Side the ‘right’ before routing these into the plug‑in, and also that you have M‑S mode selected. In this mode, the Direction knob sets the position of the Mid and the Spread control defines the level of the Sides recording, and thus the width of the combined signals. 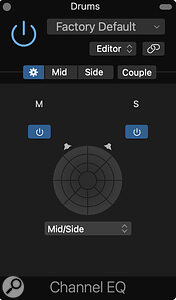 Mid‑Sides processing has a huge range of uses.Having separate control of the Mid and Side signals can be really useful if you want to process the centre of a recording differently to the signals panned to the sides. This processing can be much more than just balancing levels: you just have to use the Dual Mono versions of plug‑ins, rather than the stereo versions. If you load up a Channel EQ as a Dual Mono plug‑in, you’ll see that you can EQ the left and right channels of your stereo recording separately by selecting the L and R icons. But if you click on the settings cog, you can change it so that the EQ acts on the Mid and Sides components.

In a similar fashion, you could use the Gain plug‑in to change the level of the Mid compared to the Sides to leave space for a vocal or bass, or add a flanger effect only to the Sides element of a stereo drum bus. Using Mid‑Sides Processing is common in mastering too, for example to compress the central elements of a mix to bring out snare, bass drum and vocals, while leaving the panned elements alone. Or you could cut out problematic frequencies from wide‑panned cymbals without affecting the centre sections of the kit. 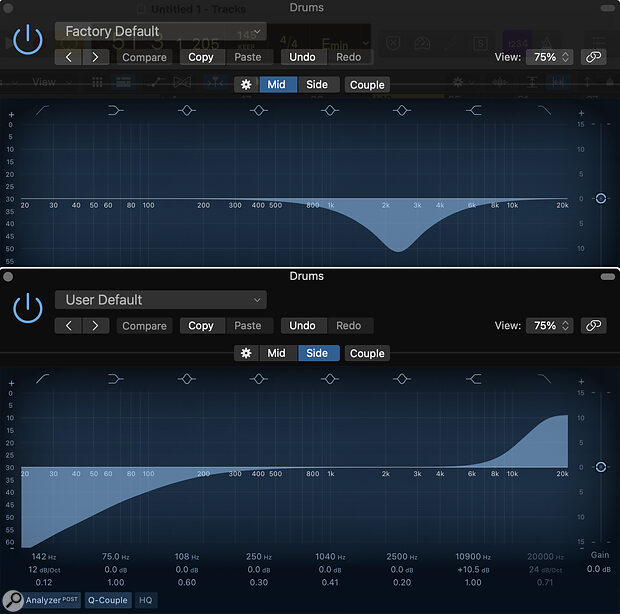 Here, a mid cut is being applied to the Mid channel, while the Sides are being treated to an LF cut and a HF boost.

The increasing requirements for immersive audio in virtual‑reality applications means that we engineers are going to have to start thinking (and listening) in three dimensions.

Binaural recording is a fascinating technique for capturing immersive audio (we discussed it in detail in the April 2021 issue, see www.soundonsound.com/techniques/introduction-binaural-recording). But you can also create ‘pseudo binaural’ mixes in Logic Pro using ‘normal’ recordings. In the Pan menu, you’ll see a new Binaural Pan option; selecting this and double‑clicking on the pan pot opens the Binaural Pan window. 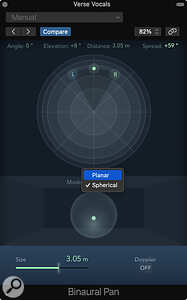 Here you can position any audio in a virtual three‑dimensional space (using the ‘pucks’), and stereo signals can have their width defined in that space. It’s a very intuitive system — just drag the audio where you want it to be and move the L/R elements to define the width of the stereo image — just remember that you’ll need to wear headphones to hear the full effect. The Mode control sets this space as ‘flat’ (a 2D plane) or as a 3D (spherical) space. The shape of the former space can be adjusted in various ways, and you can elevate the pucks above the horizontal plane. The latter option is a sort of virtual head: move the audio across it and it sounds like it’s moving above you. As usual, your ears will tell you more about how these positions sound than any display can, but it’s a useful guide.

You can adjust the size of the space, add a synthesized Doppler effect, and change the ‘size’ of the virtual space. Automation of the position and width of your binaural elements can create some very dynamic sounds. If you click on the little arrow at the bottom of the plug‑in window, you can engage (or not) the Diffuse‑Field Compensation checkbox. If you are routing lots of binaural tracks to a bus, you can turn this off and use the Binaural Post‑Processing plug‑in on this bus to process them all together and reduce CPU load. 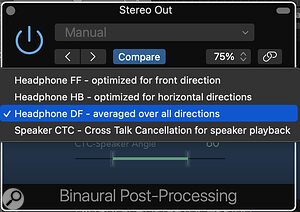 Logic’s Binaural Post‑Processing plug‑in allows you to compensate for different headphone and speaker setups when playing back binaural audio.The Binaural Post‑Processing plug‑in is probably the least‑understood plug‑in in Logic Pro’s arsenal, but what it does is generate various binaural ‘compensation modes’ for use when binaural material is played through headphones or speakers. The CTC Crosstalk compensation mode, coupled with the speaker angle selection, can really help binaural mixes better translate, as these recordings sometimes can sometimes appear diffuse and phasey when reproduced through speakers.

Like many aspects of audio production, the effectiveness of all this binaural synthesis depends greatly on the sound being processed, but adding echo and reverberation to the rear of, and above, a mix that is mostly panned in the forward plane, for example, can really create some sense of realism in a live concert recording. And for film or video game soundtracks or ambient music, the technique can be startlingly effective.

Forward To The future

With Apple Music’s adoption of Dolby Atmos and other immersive formats (including binaural sound), mixing may soon be moving in directions beyond left, right and centre, while the increasing requirements for immersive audio in virtual‑reality applications means that we engineers are going to have to start thinking (and listening) in three dimensions. Whether this marks the same kind of radical change that happened when we moved from mono to stereo remains to be seen, but Logic Pro has the tools to take us into this brave new world while also making the most of the ‘old‑fashioned’ two‑channel stereo format.

You can change the ‘laws’ of panning in Logic Pro in the General section of the File / Project Settings / Audio Preferences pane. Because a sound always appears to be louder in the centre of a stereo field, as you pan away from the centre its level appears to drop, and the different panning law settings attempt to compensate for this effect. It doesn’t really matter in most circumstances, as you’ll be setting the levels of differently panned elements as part of your mix anyway — but don’t change the pan law mid‑mix, or you’ll end up with different balances for panned elements.

The only time these options have been useful to me was when I was moving mixes between Logic Pro and Pro Tools, and couldn’t understand why the volume of panned sources was all over the place. Setting both programs to the same pan law sorted it out.