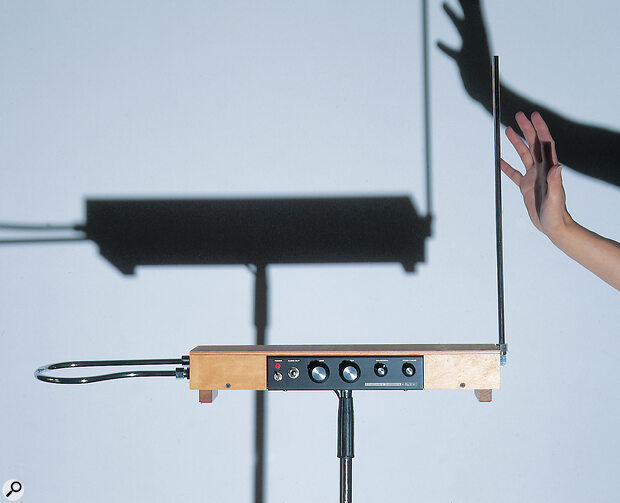 The theremin is one of the oldest electric instruments around, and its distinctive sound is instantly recognisable. However, real ones are hard to find, and even harder to play. Sam Inglis tries to work out a way of cheating.

Upon its invention by Leon Theremin in 1920, the theremin was seen as an entirely new, futuristic musical instrument. Part of its novelty lay in the fact that its sound was produced and amplified electrically, rather than through the physical vibration of a resonant string, reed, pipe or instrument body. Perhaps the theremin's most innovative feature, however, was the way in which it was played. In most designs, the player had no physical contact with the instrument at all: instead, it produced a continuous tone, the pitch and volume of which were altered by moving one's hands relative to antennae. Together, the antenna and the hand form a capacitor, the capacitance of which varies depending on the distance between hand and conductor, and this capacitor in turn varies the frequency of one of two radio‑frequency oscillators. Modulation of this oscillator with another, fixed‑frequency RF oscillator produces beat frequencies in the audio range, which can be filtered out and amplified.

Though the theremin never became the mainstream musical instrument its creator hoped it would — perhaps because of this novel, and very difficult, playing technique — its highly recognisable tones have regularly appeared on recordings since the 1920s. Initially popular with avant‑garde classical composers, its characteristic 'ooo‑eeee‑ooo' wailings later became a staple of '50s sci‑fi movie soundtracks and '60s psychedelia (see box for some examples). It has undergone yet another revival in the '90s, thanks mainly to Portishead, who used (fake) theremin extensively on their ground‑breaking Dummy album. Legendary synth guru Bob Moog now runs a company called Big Briar manufacturing new theremins, including a MIDI theremin.

The theremin, at least as it's usually used, is very much a one‑sound instrument (though I'm sure a virtuoso player would be capable of producing a much wider range of tones than is usually used on record), and it's likely that anyone wanting to use one will be after that distinctive eerie, high‑pitched wailing, most probably as a special effect only ever used on one or two tracks. The lack of versatility, scarce availability, high cost, awkward playing technique and (unless you want to make a major contribution to Mr. Moog's retirement fund) lack of MIDI mean that buying and learning to play a theremin will not be an option many will want to pursue. For this reason, I decided to see how easily it could be recreated using a keyboard‑based synth.

The sound of the real thing is, according to Peter Forrest's invaluable A‑Z Of Analogue Synthesizers, an "asymmetrically slewed sine wave", but it can be approximated reasonably well using a single oscillator, set to produce sine waves, and an LFO. The classic theremin tone is quite high‑pitched, and I found that setting the oscillator to its 2' setting yielded about the right range of notes. I also modulated its pitch using the LFO, to mimic the fast vibrato which seems to be characteristic of most recorded theremin sounds; delaying the introduction of the vibrato by half a second or so helps to make it a little more realistic.

Setting the VCA envelope to employ a longish attack, no decay, a high sustain level and a release time of about one second allowed the production of a reasonably convincing theremin‑type tone, at least in the upper registers where it is normally used (the waveform produced by a theremin, in most designs, becomes progressively less like a sine wave as you go towards the bottom of its range, producing a characteristic 'sticky' buzzing sound which is rather harder to reproduce).

The distinctive sound of the theremin, however, owes as much to the unique technique required to play it as to its actual sound‑generating mechanism. Whereas keyboard instruments produce individual, discrete notes, the theremin produces a continuous range of frequencies. When a player moves his or her hand from one position, producing a pitch of frequency X, to another, producing frequency Y, it has to go through every frequency in between (unless the player silences the instrument between notes). What this means, essentially, is that the theremin glides between notes, and it is this glide that is characteristic of the instrument. 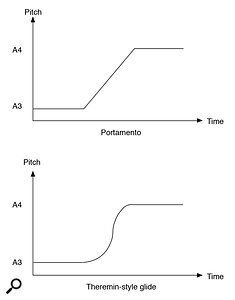 The difference between synth portamento and pitch‑changes on a theremin.In reproducing this glide, the obvious first port of call is the synthesizer's portamento controls. Switching on the JP8's portamento and setting the glide time to just under a second per octave gave a reasonable approximation over small intervals, but seemed less realistic across intervals of more than a fourth or so. The problem, I decided, is that the synth's portamento produces a very even glide: when one note is released and another depressed, portamento simply increases or decreases the pitch at a constant rate until the new note is reached. Over large intervals, this is too 'smooth' to replicate the wobbly, edgy swoop which is so characteristic of the theremin. When playing, it's also frustrating to have only limited real‑time control over how fast the glides are — on a real theremin, they can be as fast or slow as you like.

If you try playing 'air theremin', by moving your hand from one precise mid‑air position to another (if anyone asks, you can always pretend to be doing Tai Chi), you'll realise that the pitch is unlikely to change at a constant rate. At the beginning and towards the end of its travel, your hand is moving slowly but accelerating or decelerating, while in the middle of its travel it moves faster. In order to imitate the sound this would produce if you were actually playing a theremin, then, a synth needs to be set up to allow the pitch to vary in this more flexible way (see diagram).

The next thing I tried, therefore, was setting up the JP8's pitch‑bend lever in such a way that full travel in either direction shifted the pitch of the VCO up or down by exactly an octave. I then held down a sustained note somewhere in the middle of the keyboard and tried waggling the pitch‑bend lever. The improvement was immediately obvious: moving the lever to either extreme produced a pretty convincing imitation of the classic 'ooo‑eee' whole‑octave glide that is so characteristic of the theremin, and with a bit of practice it was possible to hit intermediate notes as well. It's worth keeping the portamento on, however, as it's easier to play from the keyboard when moving across adjacent notes or small intervals. If your synth allows you to control portamento rate using keyboard velocity, this would also increase the range of expression available.

Unlike portamento, the technique required to move between notes using the pitch‑bend lever forces you to produce the slow/fast/slow glides described above — the hand motion involved in moving the lever is, on a smaller scale, also one of acceleration followed by deceleration — and you can make them as fast or as slow as you want. Since the classic (clichéd?) theremin effect uses only high‑pitched noises, the resulting two‑octave range is quite sufficient for most purposes. And what's more, if your synth has a decent MIDI implementation, you should be able to sequence and edit your 'theremin' parts by recording and editing the pitch‑bend data in a sequencer. You could also try modifying the pitch with a ribbon or Roland D‑beam controller, if you have such a thing — using a D‑beam controller is after all not so very different from playing an actual theremin.

The icing on the cake should be some form of volume control. On most real theremins, the hand that isn't employed in controlling the pitch of the sound is used to control its volume, in a similar way. This means that, just as the pitch glides between notes, so the volume should swell and die depending on the player's hand movements. If you've been trying this out at home, however, you'll have noticed by now that you need one hand to hold down the appropriate note on the keyboard while you use the other to adjust the pitch wheel, leaving you with precisely no hands free.

There are two obvious ways around this problem, if your synth allows. One is to use a foot pedal to control the volume; the other is to 'latch' notes (or set an infinite release time) so they continue to sound even after you've stopped playing the note, and use your playing hand to adjust the synth's master volume or VCA level. If you're using a sequencer and don't fancy trying to control pitch and volume simultaneously in real time, you could always record the volume changes separately. 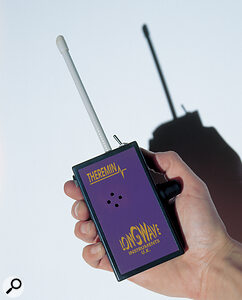 Longwave Instruments' range of theremins include the highly portable Pocket model.Hopefully, the technique in this article should produce something that sounds sufficiently like a theremin for many purposes. Since the theremin has such a unique user interface and playing technique, however, no keyboard‑based imitation can hope to produce an exact copy. If your appetite has been whetted, and you're willing to invest the time and money in learning to play the real thing, here are some useful contacts.

Perhaps the most famous use of theremin on a pop record is on the Beach Boys' 'Good Vibrations'. It can also be heard to good effect on Captain Beefheart's 'Electricity', from the album Safe As Milk, and is responsible for some of the weird noises in the solo section of Led Zeppelin's 'Whole Lotta Love'. More recent users have included The Only Ones ('Baby's Got A Gun'), Paul Weller ('Changing Man'), Blur, Pulp and Julian Cope. Film soundtracks include The Day The Earth Stood Still, Forbidden Planet, It Came From Outer Space and, latterly, Tim Burton's Ed Wood and Mars Attacks.

The track that, more than any other, re‑popularised the sound of the theremin in the '90s was 'Mysterons' from Portishead's Dummy album. Adrian Utley now owns a real theremin; however, the track was actually recorded using a Roland SH101.

Another band who use fake theremin extensively — some would say too extensively — are lovable scally funsters Space; check out 'Avenging Angels', 'The Ballad Of Tom Jones' or their version of 'We Gotta Get Out Of This Place'. Their keyboard player apparently employs a Roland Juno 106 to this end.

Though the sound of the theremin is almost unique, moreover, there is one (semi‑) traditional instrument that can sound eerily similar. Anyone who's seen the film Delicatessen may remember the scene at the end in which the hero serenades his girlfriend on the musical saw — literally, a long and flexible saw, bent into an 'S' shape and played with a violin bow. Like the theremin, the bowed saw produces a continuous tone, which glides between notes as the player bends and straightens the saw. A couple of prominent albums, Catatonia's Equally Blessed And Cursed and Mercury Rev's Deserters' Songs, have recently featured musical saw; live, the latter reproduce the effect using the D‑beam controller on a Roland SP808.