Rise Of The Machine

In this month’s Logic column we look at how Logic 10.1 expands upon its existing beat-making facilities with new Electronic Drummer presets and the new Drum Machine Designer plug-in.

Logic 10.1 includes 10 new Drummers in electronic and hip-hop styles, and we’re going to take a look at these first.

To do this, create a new Logic project, then, from the New Tracks pop-up, choose Drummer. From the Genre menu choose ‘Hip Hop’ — this is set to ‘Rock’ by default. Logic creates a new Drummer track and also opens the Drummer Editor. Hit Play on the transport and use the X-Y pad and the Drum Editor to alter the pattern and parts of the beat to taste. Having the same simple, familiar interface for acoustic and electronic drum beats works surprisingly well and it’s to Apple’s credit that they have made this interface work nicely across all genres. 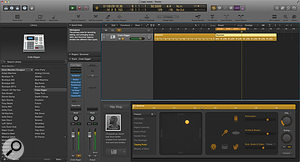 Picture 1 shows one of the new Hip Hop Drummers, Maurice, included in the Logic 10.1 update.To the left of the Drummer Editor we can choose the drummer who played the MIDI pattern and also switch between drum-kit sounds. You can browse through the new drummers included in 10.1 by clicking on the picture (see Picture 1); this displays all of the drummers within the genre we set earlier. Underneath the drummer’s picture is a menu that contains the Drum Machine Designer presets associated with the current drummer. If you want a wider selection of presets then you need to open Logic’s Library. Here you can see the full range of Drum Designer presets and easily switch between them.Logic01

Now that we have the basic groove sorted, let’s move on to embellishing it further. Ctrl-click on the region that contains your drum beat and, from the drop-down menu, choose Convert / Convert To MIDI Region. This turns the region into a MIDI region that can be edited with Logic’s normal MIDI tools.

Double-click on the MIDI region to bring up the Piano Roll and from the View menu ensure that you have the ‘Drum Names’ option ticked. As the name suggests, this replaces the keyboard to the left of the Piano Roll with a note number and drum name for each note lane.Logic02

Now that we have the drum beat as MIDI we can use Logic’s new Collapse Mode button (see Picture 2) to make the Piano Roll display only the note lanes with events on them. This is great for focusing the view on just the things you want to edit. Logic 10.1 also has a great new tool for painting in streams of notes, which makes programming drum beats much easier. From within the piano roll editor, bring up the Tool menu (by default, this is the ‘T’ key), and from the bottom of the menu choose the Brush Tool. When click-dragging in the Piano Roll the Brush Tool will create a stream of MIDI notes at the current Time Quantise value — this is perfect for inputting complex patterns. To change the resolution that the Brush Tool paints with, go to the Time Quantise field in the Piano Roll’s local inspector and choose the appropriate setting. You can also use the Brush Tool to erase notes: simply hover over an existing note and you will see the tool tip turn into an eraser, then simply click to erase.

Now that we have looked at some different ways to create and edit drum parts, let’s focus on tweaking the drum sounds themselves. Go to the Drummer track’s channel strip and double-click on the Drum Machine Designer insert to bring up its editing window. The editing window is divided into two sections: the drum cells, and the Smart Controls section beneath it. Clicking on the title bar of the Drum Machine Designer displays the mix and effects Smart Controls. The ‘Mix’ control section allows you to easily balance your drum sounds. To put into context what’s actually going on under the hood, go to the Track Mixer and click the disclosure arrow at the bottom of the Drummer channel strip. This will reveal all of the individual channels that are held within a Drum Machine Designer preset. You should see that a Drum Machine Designer instance looks very similar to a Track Stack, as covered in the April 2014 edition (http://sosm.ag/apr14logic). Navigate to the buses at the end of the drum channels. You will notice that, as you move the Mix knobs, they move the fader on the corresponding drum bus. The on/off buttons next to the level controls allow you to mute the buses to bring different drum elements in and out of the mix. Moving across to the ‘Effects’ section, here the knobs tend to control key parameters of the insert effects that run across the whole kit. For example, the low-cut knob adjusts the cutoff frequency of the Channel EQ’s high-pass filters; having it right there in the plug-in interface makes it easy to achieve filter sweeps and simple tonal adjustments. The on/off buttons next to each knob allow you to quickly listen to your drums with and without your effect changes. 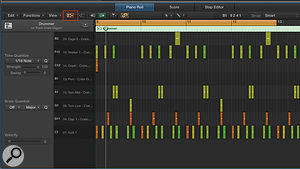 Picture 2: New to Logic 10.1 is the Collapse Mode Button, this allows you to filter the MIDI note lanes you are viewing to just those that have events.Having the controls mapped to key effects is a lot of fun and these knobs and switches also appear on the Logic Remote iPad app. I lost a good hour mashing the provided kits from the iPad app!

If you want a greater degree of control over each voice, try clicking on a single drum cell to display the Smart Controls for just that drum. With all the individual drum tracks revealed in the Track Mixer, notice that the engine behind the drum sounds is the multi-output version of Ultrabeat. Double-click on it to bring up its editing window alongside the Drum Machine Designer editing window (see Picture 3).Logic03 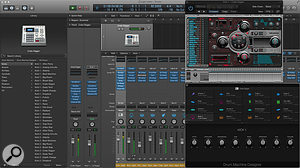 Picture 3: Drum Machine Designer makes use of a multi-output instance of Ultrabeat combined with a clever UI featuring Smart Controls and Library browser integration.So, we can see that the designers at Apple have created a simple control interface for a wealth of mixer, Ultrabeat and plug-in parameters. The beauty of this system is that you can really get inside it and customise it to your own workflow. Drum Machine Designer also integrates beautifully with Logic’s Library. Simply make sure the Library is open and then click on the Kick cell; your Library should now display a range of different kick presets (as depicted in Picture 3). If the Library is in focus, you can use the arrow keys on your keyboard to quickly try out different kick-drum presets. Repeat this process for all of the different cells, changing their sounds until you have customised the entire kit to your liking.

The Logic 10.1 update brings a wealth of new features that make beat-creation a much more pleasurable experience. We will look at more of these new features in upcoming Logic workshops.

In a future issue we will also look at creating your own Drum Machine Designer kits and configure your own Smart Control layouts for them.