Stuck in a songwriting rut? Cubase’s Chord Pads and Chord Assistant can help you out.

Whether you’re one of those Cubase users who has traditional musical skills and a firm grasp of music theory, or someone who has an irrational phobia of formal music training, Cubase 8’s suite of composition tools can be incredibly useful in developing your songwriting. Two of these tools, the Chord Assistant and the Chord Track, were the subject of a Cubase workshop in SOS June 2013 (http://sosm.ag/cubase7-chordtrack), but with Cubase Pro 8 Steinberg have both tweaked their functionality (as well as improving the associated documentation), and added a new, related, element, which they call Chord Pads.

There’s quite a lot of ground to cover, so I’ll split this workshop into two parts. This time, I’ll focus on ways to configure the Chord Pads and to use the Chord Assistant to construct an appealing series of harmonically related chords. Next month, I’ll look at the performance options provided by the Chord Pads, and explain how you can use these to create something more interesting (and hopefully more inspiring) than just a series of basic chord changes to sit alongside the Chord Track.

To start, you’ll need a MIDI track routed to your chosen ‘writing’ instrument — I used a Halion Sonic SE acoustic piano for my examples. So either create an instrument track or load an instrument into the VST Instrument rack and associate it with a MIDI track. Then select the Chord tab in the track’s Inspector panel and hit the button that looks like a playhead (next to the Chord Pad section) to open the Chord Pads tool at the bottom of the Project page.

The Chord Pad panel with a modest chord selection that has created countless popular songs.

You can adjust the layout of the Chord Pads via the Pad Layout tab.The panel’s simple default layout is dominated by a series of 12 large pads, which are arranged like the keys of a piano keyboard, and these can be triggered using notes C1-B1 — single notes are used to play the chord loaded onto the associated pad. Selecting the Edit (E) button and choosing the Pad Layout tab will present you with options for expanding the number of pads or switching to a grid layout (useful with a drum-pad controller). At the top of the panel is a mini-keyboard graphic, on which the blue coloured keys show the default MIDI trigger notes for the Chord Pads, and arranged down the left edge are icons that provide access to various editing and preset features.

You should find that the Chord Pads are automatically populated with a basic set of chords that would be suitable for a song construction in the key of C major (ish), but there’s also an impressive list of presets that can be explored — click on the Preset option in the control set that runs down the left edge of the panel. You could choose to use these presets as-is, but they’re best used as starting points for your own sequences, so with that in mind let’s work through an example.

Select the Favourite Pop Chords preset and clear all but four pads by right-clicking on a pad and selecting ‘unassign pad’, to leave you with the most classic of four-chord sequences in C major: C, F, G and A minor. There are thousands of popular songs built around sequences of these four basic chords (the I, IV, V and VI chords in a major key), but our aim is to come up with something more interesting that’s a little outside your compositional comfort zone. 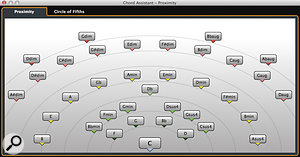 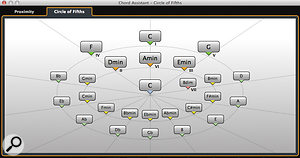 The Circle of Fifths mode is perhaps a little more intuitive for budding songwriters.We’ll assume that your music theory is a bit sketchy and seek advice from the Chord Assistant. Click the ‘speech bubble’ icon on the left, which opens and closes the Chord Assistant window. Within this are two tabs, each offering a different graphical mode, one called Proximity and the other Circle of Fifths. These modes both display the harmonic relationships between the various chords shown, and which you prefer will be a matter of taste and/or the extent of your musical knowledge. Whichever mode you use, the first task is to pick an initial chord. Then use the ‘assign chord as origin for Chord Assistant’ option (right-click on a chord in the Chord Assistant window to do this). The chord you assign as the ‘origin’ defines your major/minor key, and the rest of the display will automatically adjust to reflect this.

In Proximity mode, the ‘origin’ chord is shown bottom-centre, with chords arranged in arcs around it. The further a chord is away from the origin, the more complex its harmonic relationship with the origin chord (so, effectively, the more surprising it will be to the listener). Click on a chord and it will sound via your chosen instrument. You could quite easily wander from one pad to another in stepping-stone fashion, safe in the knowledge that each step won’t ask too much of the ear. Potentially more useful are the simple chord progressions that are suggested as you hover the mouse over any chord in the display — for those without traditional music skills, these suggestions can be a very helpful starting point.

The Circle of Fifths mode provides a visual take on the classic relationship between the 12 tones in the chromatic scale and the corresponding chords in major and minor keys. In this mode, the ‘origin’ chord is shown both at the centre and as the I (tonic) chord, top-centre. The other six standard chords of the corresponding key dominate the top wedge of the display and their associated Roman numerals are also indicated. Less obvious chord choices are shown in the lower part of the display.

Assembling a few chords to work with is a breeze — find your desired chords via the Assistant and drag them onto the Chord Pads below. However, as discussed above, the chord types offered by the Chord Assistant are fairly standard three- and four-note varieties, which can become a little boring and predictable. The screenshot shows an example chord set I created by starting with my four-chord trick, and notice that I’ve included a few additional chords. Here are four simple ways in which you can spice up your chord selections:

1. Right-click on a Chord Pad and select the ‘Assign Pad from MIDI input’. The pad will be highlighted in red until you play a combination of notes on your MIDI keyboard. Rather wonderfully, whether you knew what chord you were playing or were simply hitting a selection of notes that you think ‘sound nice’, Cubase will do its best to identify the chord and give it a suitable label on the Chord Pad. If you play the keyboard by ear, this is a very helpful means of finding out what you’re actually playing — you can then use the Chord Assistant to identify chords that will work well with the one you’ve played.

2. Hover over a Chord Pad and click the down-arrow icon on its left edge. This opens the Chord Editor, which makes available a slightly wider selection of chords from which to choose.

3. Again, hover over a pad and this time use the left/right arrow buttons (located centre-bottom) to toggle through different ‘tensions’ based on the starting chord. This provides you with a small selection of more harmonically complex chords to consider. 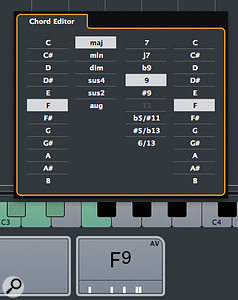 Provided you’ve let the Chord Assistant guide you, and have not broken the rules of harmony completely (by adding too many harmonically distant chords to your selection), you should be ready to write, using the custom-made chord palette you have at your fingertips. You can then trigger the pads via MIDI, whether via your keyboard, or by programming notes in the piano-roll editor, to create a sequence. And you can record that sequence into a new MIDI track if you wish, for further refinement. Next month, I’ll take things a step further, looking in particular at some performance options related to Chord Pads.